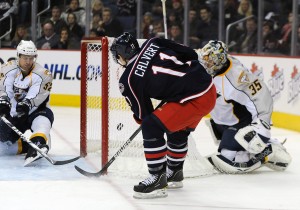 COLUMBUS, Ohio- Just when you think it can’t get any worse for the Columbus Blue Jackets, starting off a season 0-4-1, the worse start in franchise history that is, well, it has. To some extent that is. The Columbus Dispatch reported today that center Jeff Carter is listed as doubtful for tomorrow night’s action, and may miss more depending on the severity of a right foot injury.

“It’s a little hairline crack where he took a shot. It’s an old injury. We’re hoping it won’t be too long. We might get him back for the weekend,” Head Coach Scott Arniel said.

Carter has skated in all five games so far for the Blue Jackets this season, adding three helpers. The club has listed him as day to day.

Expected to step into Carter’s role is center Derek Brassard. Brassard will center a top line of RJ Umberger and Rick Nash after having a cup of coffee on the 4th line.  Brassard will need to compete to remain in that spot and play regular minutes, something head coach Scott will be expecting as soon as tomorrow night.

In other Columbus Blue Jackets news, the team assigned forward Matt Calvert to the Springfield Falcons of the American Hockey League. It was announced this afternoon by Executive Vice President of Hockey Operations and General Manager Scott Howson.

The 21 year old Calvert, recorded one assist in five games with the Blue Jackets this season, coming off of a 20 point season in 42 games in 2010-11. Taking his place is 24 year old Cody Bass, who has been summoned from the Falcons. Bass, 24, has skated in 34 NHL games all with the Ottawa Senators. The Owen Sound, Ontario native has collected two goals and two assists in five games for the Springfield Falcons this season.

As far as Calvert, head coach Scott Arniel anticipates a return of the Brandon, Manitoba native in the near future. Until then, Calvert will need to go down and create a scoring identity, something Arniel feels hasn’t quite been the case in Columbus.

“It’s almost like he’s lost a little bit of his jump. We want him to go down and get his scoring touch, get feeling good about himself. He’s never really gotten his rhythm going, he hasn’t created any scoring chances,” Arniel said.

Look for Calvert to contribute in Springfield and eventually wind up back in Columbus at some point in the near future.