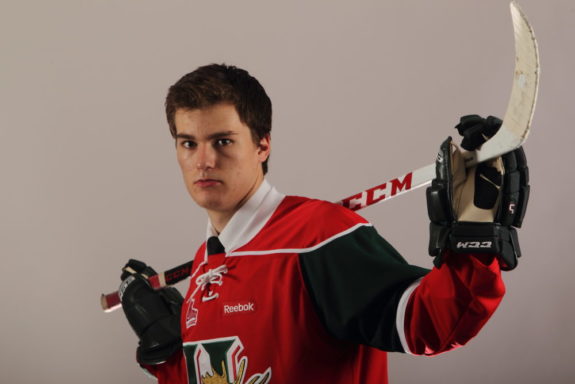 As I noted in The Next Ones 2013 NHL Draft Midterm Rankings, “The Jonathan Drouin Bandwagon is more like a German Transrapid TR-09 high speed train.”

Drouin is quickly becoming The Human Hockey Highlight Film, seemingly adding to his portfolio every time he hits the ice.

He is cementing the case for me, for having him ranked number one ahead of both tremendous talents – Seth Jones and his teammate Nathan MacKinnon – in my midterm NHL draft rankings (The Next Ones Top 100).

His most recent masterpiece and goal-of-the-year candidate came yesterday against the Shawinigan Cataractes as the Halifax Mooseheads’ winger went coast-to-coast, ostensibly all the way from St. John’s, NL to Victoria, BC. He deceptively weaves through the opposing five players methodically in a silky smooth, brilliantly creative effort.

You do not need to speak French to comprehend Bruno Gervais’s reaction:

“Someone call Bobby Orr to see if he had an out-of-body experience, because Halifax Mooseheads phenom Jonathan Drouin channeled the living legend on a coast-to-coast goal on Friday.” (Yahoo Sports)

Drouin seems to want to show the hockey world just how many ways he can score – three beauties with one whilst short-handed, one even strength and one on the powerplay to complete the trick.

The Best Second Assist Ever?

This might be an overstatement, but Drouin’s deft puckhandling, hockey sense and resilience are all on fine display:

The following is an excerpt from my midterm rankings article on making the case for Drouin for number one:

“Before I am condemned to the asylum for even breaching the subject that Drouin deserves to be taken first overall over MacKinnon and Jones, let’s examine the evidence.

Two words sum up the case (or least make a good starting point) for choosing the sublime winger over the two aforementioned potential cornerstone prospects – hockey sense. Often used when describing, but what really do we mean when we talk about hockey sense. Not easy to put to words, but his awareness, vision, anticipation, poise and focus are all off the charts. Jonathan doesn’t just go where the puck is; he goes to where the puck will be.

While MacKinnon and Jones both possess high level of hockey sense to go with their superlative skills, Drouin is at another level in this aspect – a level rarely witnessed, even in the NHL.

If there was a school of hockey, Drouin would be at the top of class in his quest for a PhD in hockey sense. He is a student of the game and should only continue to develop his immense potential.”

Drouin continues to make my life easier, making his case for going number one in Newark, New Jersey in June on a game in, game out basis.

Beyond the highlights is his consistent tantalizing play. He continues on the longest point streak in the QMJHL this season, hitting the score sheet in 18 consecutive games and counting, accumulating 37 points over that time (18 goals and 19 assists).