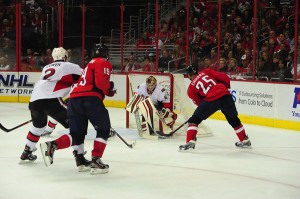 Chimera, Caps working in the zone against Anderson and the Senators. (Tom Turk/THW)

Ever since Dale Hunter took over head coaching duties in Washington last Monday, the Capitals have gone 1-2, finally earning their first win Saturday night against the Ottawa Senators in a 3-2 overtime victory. Prior to the win, the Caps made minor improvements in both games they played since the coaching change, but the one constant in each loss was the lack of offense. For a team with so much scoring potential, the Caps couldn’t seem to get more than one goal, as they lost 2-1 against both the Blues and Penguins. Everything else seemed to be rather okay with the team. The problem: not enough scoring chances.

The scoring chance outage was, in part, because of the few amount of shots by Washington versus the amount they had allowed. The Caps were unable to make above 20 shots while allowing shot totals in the 30’s. Fewer shots most of the time means that there are fewer opportunities to earn scoring chances. The minimal chances to get a goal on the board kept the Capitals to one goal in both of the games. This was best displayed in the last two minutes of the game against the Penguins Wednesday night, when the Caps couldn’t even exit their own end playing 6-on-5 hockey. Some argue the amount of shots is almost irrelevant as long as the opportunities were coming, but when the opportunities, goals and shots are not coming, it is a legitimate concern.

The 2-1 loss to St. Louis was due to the tight Hitchcock defense the Blues played. After the Penguins game, Hunter diagnosed the few scoring chances there as a result of the new defensive style the Caps were adjusting to playing. Since Hunter took over, Washington has taken to a more man-to-man style. Against an offensively efficient Pittsburgh team, to stick on players like Sidney Crosby and Evgeni Malkin can be a daunting task, even if they don’t score, especially if it is different from what they were doing before.

So how did the defense affect the Caps’ offense? The energy spent defending Pittsburgh so closely made it tough to clear the puck out of the zone effectively; thus, adding more work on defense and less time in the other end. Once the Caps were able to make it out, they’d be far too tired to create a good cycle — back to their own end.

The defensive shift wasn’t a whole failure, though. Wednesday’s showing was slightly better than Monday’s performance, and the Capitals looked pretty good for the first half of the game — progress. The progress showed even more on Saturday against the Senators. Albeit, a weaker opponent than the last two, but still a chance for the Caps to get used to playing better hockey. 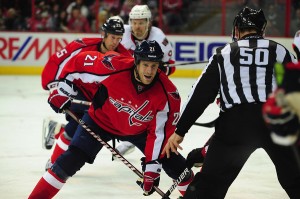 Laich, who scored the game-winner in his 500th career game against the Senators. (Tom Turk/THW)

Although after Nicklas Backstrom scored the first goal of the game in just under two minutes, the Senators took over the offensive attack, and the Caps couldn’t seem to get out of their own zone, much like in past games. The momentum for Ottawa continued into the second period and they scored to tie the game at one.

The Caps have been known to get down on themselves after giving up a lead. Yet, in this game, they only got more intense, and right away.

Washington seemed to find a “second wind” and they only played better, scoring the second goal of the night and dominating offensively, closing the shot gap with quality shots and scoring chances. The only blemish in the second half of the game came with about three minutes remaining in the game due to one bad shift where the Caps couldn’t clear the puck out of the zone. The Sens took advantage, tying the game again and sending the two teams to overtime. No worries for the Capitals, though, as 12 seconds into the supplemental period, Jason Chimera cleanly dished the puck to Brooks Laich for the game-winner, who played the 500th game of his career Saturday against the team that drafted him.

Washington won the game, scoring three goals and getting 35 shots on net. What was the difference?

The Caps started to win puck battles and take advantage of the Senators’ mistakes, lessening the duties they had in their own end and giving the Caps opportunities for odd-man rushes and breakaways. More importantly for their offense, the Capitals were more strategic in their physical game. In past games, the Caps seemed to be making hits just to make hits, but against the Senators, the hits they made opened the ice up for cleaner exits out of their own end and on the forecheck in the offensive zone for clearer shots on Craig Anderson. It certainly helped the team was disciplined and that Michal Neuvirth did a smooth job starting in place of Tomas Vokoun. 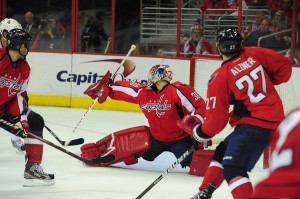 Neuvirth, making a save against Ottawa. (Tom Turk/THW)

Hunter is also making adjustments to his own coaching as well, which aided in Washington’s better offensive play Saturday. Remember he claimed the man-to-man defense wore down the Caps? Their shifts were much shorter than they usual. In the game against Pittsburgh, Alex Ovechkin had 19:22 in TOI with 21 shifts. Saturday night against the Senators, he had 20:55 in TOI with 25 shifts. The man-to-man had been working well, so he is right to try to manage things around the defensive improvements and try different things to boost the offense. It’s also another example in how Hunter trusts his top players and tries his best to give them the most time to score and do their thing — which, in turn, should help boost offensive chances.

Saturday’s game was the most evident sign of improvement for the Capitals. Of course, as it is only one game, there are still things they need to work on: the Senators got 36 shots on net, meaning that they still spent a significant amount of time in the Caps’ end. Also, even though clearing the puck went much smoother than in the last few games, there are moments when the defense is a little slow to the puck. Those are things that can be resolved through practice and patience.

The Capitals get back to work Monday night against the Southeast Division-leading Florida Panthers on the road. Look for a few more adjustments to be made in that game as well. Right now, Washington is riding on momentum and confidence, as they aim to close the points gap from five points to three.

Notes: Roman Hamrlik and Alex Semin were scratched in Saturday’s game due to injuries according to the team.