There is no doubt that the Kings will be active this offseason. Starting with signing restricted free agents Tyler Toffoli and Martin Jones to negotiating contracts with unrestricted free agents Justin Williams, Andrej Sekera, and Jarret Stoll, there is much to be decided still within the organization.

The 2015 NHL free agent list is considered thin this year. Williams is an appealing unrestricted free agent with three Stanley Cups and a Conn Smythe on his resume. Andrej Sekera is another upcoming free agent that would be serviceable to a lot of teams looking to solidify their top-four defense and help contend for a cup as the Kings tried to do in acquiring him in February.

The free agent list includes other established names like Mike Green, Paul Martin, and Joel Ward that will most likely draw attention as well. Another free agent that may not be as established, but will be as sought after is Mike Reilly.

Who is Mike Reilly? 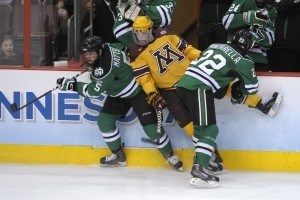 Mike Reilly was drafted in the fourth round of the 2011 draft by the Columbus Blue Jackets. Just finishing his junior year at the University of Minnesota, the Columbus prospect is four years removed from his draft class, stayed in college for two years after being drafted, and can test the free agent market under the Collective Bargaining Agreement.

Reilly was among the top ten finalists for the Hobey Baker Award and holds the title for Big Ten Defensive Player of the Year in the NCAA. Reilly has also won a gold medal with the United States at the 2013 World Junior Championship and took home the bronze this year.

The 6’1” and 180 lbs. defenseman recorded 42 points in the 39 games played this last season for the University of Minnesota and looks poised to take on the minutes and level of play required by an NHL defenseman.

Would Reilly Fit With the Kings?

The obvious answer is, of course. Which team wouldn’t want/couldn’t use a young, puck-moving defenseman with a lot of upside? When looking at the Mike Reilly situation and without getting too excited though, it looks similar to the draft lottery situation: there is a chance, but a small one at that.

While signing the NCAA prospect could alleviate the pressure of Voynov’s situation and the need to spend excessive money on signing Sekera, there are other things to consider. The Kings have four-roster defenseman in Doughty, Muzzin, Martinez, and Greene signed together until 2017-2018. If Voynov were acquitted, the Kings would then have five defenseman that are as deep and as comparable to any five in the league.

Furthermore, McNabb played well towards the end of the season showing progression and Jeff Schultz is signed for another year for insurance. The Manchester Monarchs are playing well enough that players like Derek Forbort and Colin Miller have the possibility to compete for a spot in training camp.

Looking at the nine teams selected by Reilly, Los Angeles is just as nice of a destination as any of the other eight. Los Angeles has a great development staff and a competitive team. The team’s recent success on all levels must look promising to a budding star wanting to establish himself in the NHL.

The Kings defensive roster is deep, talented, and is in the prime of the career with the exception of, maybe, Matt Greene. To add a player like Mike Reilly would surely be nice. It would add even more potential to a prospect cabinet filled with great defensive prospects. Keeping the same perspective as the draft lottery or when playing any odds, one has to hope for the best and expect not to land the star prospect.