In June of 2016, the Toronto Maple Leafs made a monumental deal which flew quietly under the radar, yet, there was a major reason why.

The day prior, on Jun. 24, the Leafs selected Auston Matthews with the first overall pick in the 2016 NHL Entry Draft. As such, there was an incredible amount of attention placed strictly upon the Leafs’ newest prospect, who, joining a team defined by their recent and long-term failures on the ice, had long been projected to lead Toronto on a return to Stanley Cup Playoff glory.

So, in reality, it should come as no surprise that the Leafs’ acquisition of Kerby Rychel from the Columbus Blue Jackets received far less consideration than it certainly should have.

Flying Under the Radar

Originally a first round pick, 19th overall by the Blue Jackets in the 2013 NHL Entry Draft, Rychel has long been a consistent offensive producer who brings a ton of grit to the ice. A dominant player in his Ontario Hockey League days with, primarily, the Windsor Spitfires, Rychel enjoyed back to back 40-goal seasons from 2011-13 and has adapted his game well to the professional ranks.

In fact, after scoring 33 points in 55 games as a rookie with the Springfield Falcons of the American Hockey League in 2014-15, Rychel made the jump to Columbus, where he picked up three assists in a short five-game stint. Then, in 2015-16, after playing the majority of his season in the AHL, Rychel stuck with the Blue Jackets for 32 contests, scoring two goals and adding seven assists in the process, good for nine points.

However, all was not what it seemed in Columbus for Rychel, who, after failing to ascend the Blue Jackets’ depth chart, was involved in a meeting with his agent, father, and the team itself to discuss his role within the organization.

While the exact words spoken in said meeting have never been released, nor likely never will, Rychel ultimately requested a trade out of Ohio, and, after some time later, got his wish. And, while the Leafs were fortunate to acquire Rychel, there were a number of other franchises interested in the young winger’s services, indicating his value.

As previously mentioned, Rychel is a dynamic and consistent offensive player who can score points in bunches. At 6’1″, 215 pounds, Rychel’s large frame allows him to drive the net in search of rebounds, allowing him to put away the odd dirty goal. However, given his junior pedigree, it is clear that Rychel is better defined as a true goal scorer, with his hard shot and quick release a major reason why. In addition to his goal scoring capabilities, Rychel can also move the puck quickly and accurately, leading to the power-forward drawing a large number of assists as well.

Yet, away from the puck, Rychel is equally dangerous, as not only is he a risk offensively, but he also has the ability to play a highly physical yet calculated game. Rychel does not shy away from throwing around his big frame, and will even drop the gloves on occasion if the situation requires. A truly complete, yet developing player, Rychel leads by example and is a solid team player; he captained Windsor in the 2013-14 season and was an assistant with Team Canada at the U-18 World Junior Championship.

A multi-tool player with considerable upside and in his early 20’s, Rychel is a highly skilled and highly valuable prospect. In hindsight, dealing Scott Harrington and a draft pick in exchange for Rychel appears to have been a downright steal by Toronto General Manager Lou Lamoriello.

What Does the Future Hold?

Given Rychel’s elite talent and seemingly sky-high potential, what role will he play with the Maple Leafs in the near future?

Well, the fact that Rychel is a left-winger is an extremely important aspect to consider and is of major benefit, as, at the moment, the Leafs are fairly thin on the left side. Of course, Toronto holds two excellent young left-wingers in James van Riemsdyk and William Nylander, but there is a significant drop-off in talent following these two. Currently, Milan Michalek mans the third line, while Matt Martin, who signed a four-year deal as a free agent, skates on the fourth. Michalek, who has had injury troubles in recent years and is in the final year of his current contract, would be the obvious choice to be replaced by Rychel, yet this is, of course, dependent on a number of factors, the most notable of which being Rychel’s individual development. 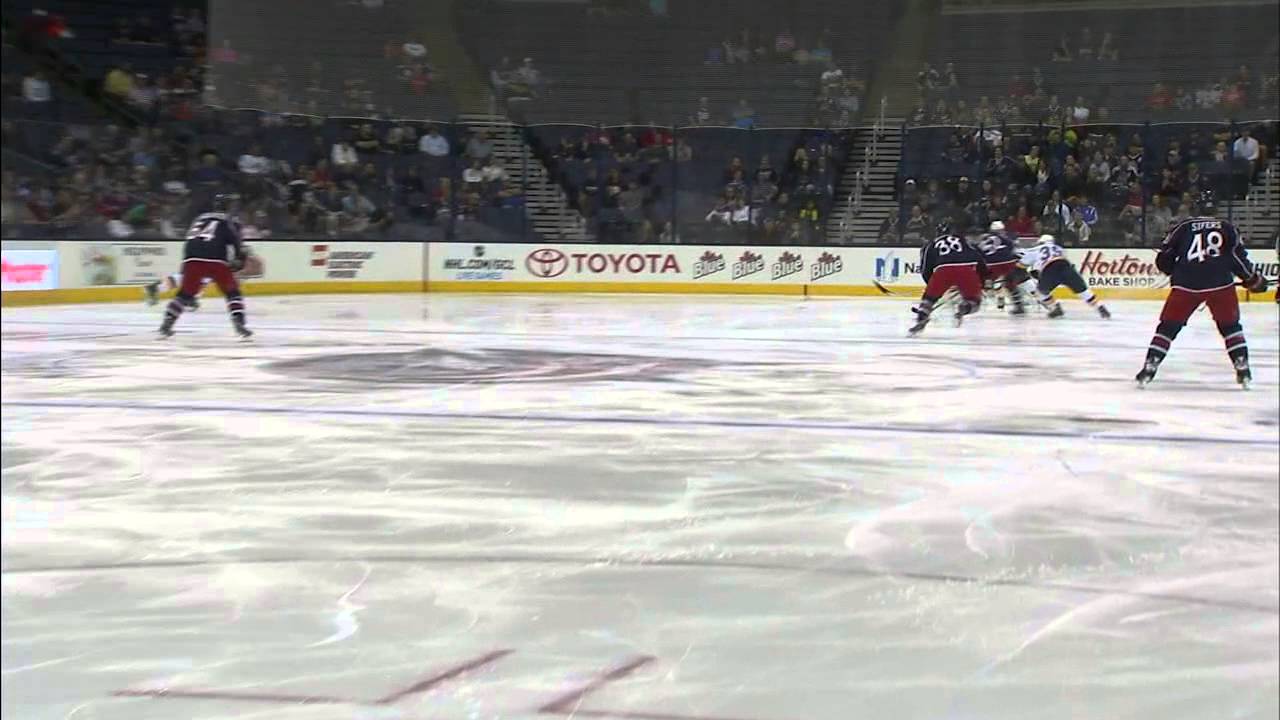 Sure, Rychel could step into the Leafs’ lineup alongside an incredible number of other Toronto prospects, but before doing so he must prove he is ready for consistent NHL ice time. Of course, he played a significant amount with the Blue Jackets last season, and as a result, has a fair amount of experience in comparison to other Leafs youngsters, but whether or not Rychel can be an effective player at hockey highest level remains to be seen. Beginning the 2016-17 season in the AHL with the Marlies was ultimately the right decision for Rychel. With established, veteran NHL players ahead of him on the depth chart, Rychel must earn his place on the Leafs’ roster, and it will take a consistent effort in the minors to do so.

However, as we have seen, Rychel has the skills and abilities to do exactly that and should produce his greatest professional season to date in the current campaign. A dominant power forward with size, offensive abilities, and a willingness to stand up for his teammates, Rychel has all the makings of an excellent NHL player and should become a mainstay in the Leafs’ top-six in the near future. Now, Rychel will have to put in the work to prove to his new organization that he can not only outcompete a veteran for a roster spot but also find success at a consistent pace, making it virtually impossible for him to returned to the AHL, where he quite clearly does not desire to be.