EA Sports has released the first of several roster updates for NHL 17 this season and with them, several notes can be made about the Edmonton Oilers. The game has gotten deeper with rosters across thirteen leagues and two top prospects team — this has created for some massive overhaul to be done regarding the rosters. Naturally, some omissions have been made as the video game company, the NHL, NHLPA and PHPA work around licensing agreements.

The roster update comes after the Nail Yakupov trade, but you won’t find Zach Pochiro on the AHL Bakersfield Condors. EA Sports is still heavily behind in their minor pro updates, and Pochiro still finds himself on the ECHL Quad City Mallard’s roster. That said, Pochiro has yet to play a game for the Oilers AHL affiliate in Bakersfield.

Another Oiler that finds himself out of the game altogether is Andrew Ference. The Oilers placed Ference on injured-reserve (IR) with what’s expected to be a career-ending hip injury. He was on the Oilers original roster when the game was released in September with a 79 overall rating and listed as an AHL top two defensemen. Kris Russell, a free agent signing in October, is on the roster.

Here are some Oiler notes regarding the most recent NHL 17 roster update:

Ratings-wise, there have been no changes to the Oilers virtual roster, except for rookie Jesse Puljujarvi seeing an increase from 76 to 79 overall. A subtle change but it helps keep pace with several changes made to the other NHL rookies in the game.

From the 2016 NHL Draft class, just Auston Matthews (85) and Patrik Laine (82) have higher ratings than the Oilers rookie. Another rookie debuting from the NCAA is Jimmy Vesey (New York Rangers) who shares the same rating as Puljujarvi if that puts things into perspective.

What the rating on the Oilers’ right side does reveal is how dire the depth is on the right side, as the other weaker teams in the Pacific Division all have better depth ratings wise. Every other team in a Pacific has no players with an 80 overall rating, aside from Anaheim (two) and Los Angeles (one).

Reading the above list, you’ll notice one name is noticeably missing; Drake Caggiula.

The Oilers prized NCAA free agent signing this summer has generated plenty of buzz, and most prognosticators had the 22-year-old forward penciled into the Oilers bottom-six to start the year. Injuries have kept Caggiula out of the Oilers lineup, and he currently sits on IR. That means until he plays an NHL game for the Oilers he won’t be added to the Oilers virtual roster.

Another big name missing from the roster is recently demoted defenseman Matt Benning. Benning, like Caggiula, is not in the video game as of this most recent roster update. Benning was another underrated free agent signing by Oilers GM Peter Chiarelli.

If you’re a big fan of the series and the franchise mode, PetrPuck is an awesome resource which gives in-depth creation instructions to make a virtual Caggiula and the others. Currently, on PetrPuck there are guides for creating several Oiler prospects such as Patrick Russell (F) Jere Sallinen (F), Nick Ellis (G), Caggiula and Benning.

Condors Are an Absolute Mess in NHL 17 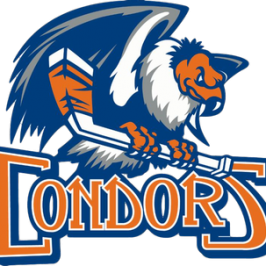 There is no way around saying it — the Oilers virtual AHL affiliate in Bakersfield is an absolute disaster for gamers. If you’re looking for an authentic roster for the Condors, grab some takeout, whatever your preferred beverage is and sit down with your buddies and hammer it out. There is a night and day difference between the virtual and real Condors roster.

There are several notable omissions, and the team is basically the 2015-16 Condors. EA has a long way to go regarding keeping up with minor league rosters, but it’s the cost of trying to create the most in-depth fan experience a hockey video game can offer. The game developers are heavily behind, and the likes of Rob Klinkhammer and Nick Pageau aren’t supposed to be here. Neither is Bogdan Yakimov, the Oilers prospect who left to return to the KHL this summer, but we’ll make a special exception for him. Several rating blunders are also needing to be updated which has created some difficulty sorting out the roster.

Keep checking THW for the latest news regarding NHL 17 and the Edmonton Oilers.