Despite the strides the NHL has made in the “non-traditional” markets throughout the southern and western United States, there always seems to be a wrench thrown into the system.

Last night on Facebook, local NBC 13 News (Birmingham, Alabama) personality Stephanie Walker posted “Come on!! Somebody score already so we can get on with the 10pm news.” (screenshot of the thread as of 8:31 am this morning is below)

Had this comment been posted by the average viewer, it probably would not have been noticed by anyone.  However, since Walker works for the channel, she is also perceived as a spokesperson for NBC 13.  Two other local hockey fans posted their disagreement with Walker’s statement, which brought the thread to this writer’s attention.

In the interest of full disclosure, my response was the following:  “Hockey is the only reason I watch NBC13.  If NBC wasn’t the national carrier of NHL games, I wouldn’t ever turn the channel on.  Anyways, isn’t it bad form to publicly complain about your employer’s programming choices? Would you have complained if it were an overtime in the Superbowl?”

Hockey fans living in the south are definitely in the minority of sports enthusiasts, especially when living in a city without an NHL team (Birmingham’s closest team is the Nashville Predators). Every season we have to deal with people who are unfamiliar with the sport making comments that, even to a new hockey fan, are completely out of place. For example, while wearing my Blackhawks jersey, I have been asked if I was a Florida State (Seminoles) fan.

The NHL is making inroads in non-traditional markets, and even in cities like Birmingham – despite the fact that from the 1970s-1990s the city was home to a WHA team and later an ECHL team, the Birmingham Bulls (with a year of the Birmingham SouthStars thrown in as well). The Birmingham metro area is the home ice to the University of Alabama’s club team, the Frozen Tide, who won the SECHC championship this year. Youth hockey is also taking off at the city’s only rink in Pelham.

In Walker’s defense, she did apologize this morning, explaining that she normally is not awake during the 10:00 pm news and was looking forward to seeing it. Another comment took the typical “It’s a joke, nobody got hurt” defense.

No, nobody got hurt. But people were offended. And with Walker’s role as a spokesperson for the local network affiliate, she likely alienated viewers with her comment. 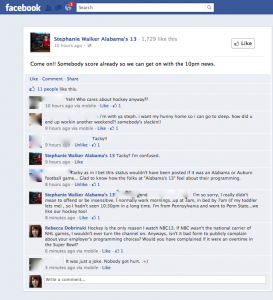