As prices of boxes, packs and single cards have escalated over the past decade it’s no wonder that graded versions of cards especially RC’s add to their lasting appeal and value.  There was even a time a few years ago when new RC’s were issued in graded form.  As the years have gone by near perfect graded versions of cards that were previously thought to simply not exist by nature of the way they were originally manufactured have suddenly started turning up.  As it turns out some of them aren’t truly all that original but that all depends on your opinion.

With all due respect to the handful of grading companies that exist today there really are only two when it comes to the overwhelming majority of collectors and that’s PSA (the innovators) and BGS (the standard IMO).  I personally give the nod to BGS as they have a less liberal system that grades cards using numbers that vary by .5 versus a true whole number system used by PSA.  In addition, Beckett has a Vintage specific line dedicated to older cards (pre-1980) and their more unique grading needs.  If you weren’t aware the grading process for cards is from 1 to 10, the higher the number the better the condition of the card.  Both of these companies pride themselves on the integrity of their grades and have slabbed hundreds of thousands of cards at this point.

So what’s the beef if collectors have two reliable and honest options for their graded cards?  It’s simple, too many white whales that have started to pop up over the last few years but there is an answer as to why and its uncut sheets.  An uncut sheet is just that, a sheet of cards that contain a large portion or all of the cards from a specific set but it was never cut up by the original manufacturer and made into individual cards.  Some dealers have been purchasing uncut sheets most of which can be purchased for less than the sum of the cards contained on them (honestly, what the heck would you do with one other than framing it since they stand nearly 4 feet tall).  They then take the sheet to a professional printing company and have the sheet cut up into single cards that are the correct length and height for original cards in the set.  What they end up with is thirty year old card that has razor sharp corners and perfect centering which are 2 of the 3 most important factors in grading (surface condition being the last).  A perfect example of a card that simply cannot exist in that state based on the original manufacturing process of the manufacturer.

Let’s take a step back before we move forward with this tale.  O-Pee-Chee was a company that primarily sold gum and candy to stores throughout Canada for nearly 85 years.  As was the case with most manufacturers back then cards sets were printed as an extension of their existing business (why do you think they originally referred to the early baseball cards as tobacco cards) so quality control was never the primary focus.  Also the manufacturing process back then was not as it is today and they didn’t utilize a laser guided computer controlled cutting press as is used to manufacture today’s cards.   That’s why so many early cards are very hard to find centered in all four directions; top to bottom and left to right and in most cases their edges are a little rough.  The case with Gretzky’s RC was also compounded by the fact that his RC appeared on the second row of the sheet third from the right side.  As you would expect, the first cut of a sheet had to also remove the printing border that appears outside of the card margins so the first two rows of cards rarely started off with even edges on top.

If you would like to see a good example firsthand, buy an unopened pack of O-Pee-Chee hockey from a trustworthy dealer, pick 1984-1985 as I did recently as it’s a great example of how impossible these cards should be to find.  While I was excited to pull Doug Gilmour and Cam Neely RC’s out of the same pack I paid $9.00 for, neither are anywhere near perfectly centered (see picture) and the Gilmour has rough edges.  I was still very happy to pull both of these cards but low and behold multiple copies of PSA 9 and BGS 9.5 graded versions exist on EBay for both of them.   To be honest, I never gave this much thought until last year when a Wayne Gretzky O-Pee-Chee RC that was graded Gem Mint 10 by PSA  was sold at auction for a whopping $94,613.00.  Yes, that number is correct. . a card that normally sells for $800.00 to $1,200.00 in near mint condition sold for more than $94,000.00 as it was the only one ever graded a 10.  I am not entirely sure whether this card was came from an uncut sheet thanks to the rough left edge (see picture) but I have never seen one that looks like it in my 22 years of collecting.  At the same time that card was up for auction I was in Toronto at the bi-annual Sports Card Expo that is a must attend for all card collectors.  I went to TO with the explicit purpose of purchasing a Gretzky RC as well yet I only had a $450.00 budget.  I am very satisfied with my version and won’t be grading it for obvious reasons.

So I guess it all comes down to opinion but to pay so much more (on average ten to twenty times as much as an ungraded copy) for a graded version of a card that we all know in our hearts can’t exist in its natural state seems like having someone build you a Rolls Royce out of spare parts and calling it an “original”.    So what should you do, it’s simple ask the dealer you are buying from if the card came from an uncut sheet before it was graded, if it is or they won’t tell you then you should use your best judgment.  Also, maybe we all need to scale our expectation back a little bit, after all what’s so bad with a 8 or 9 vs. a 10.  Your wallet will surely thank you . . . 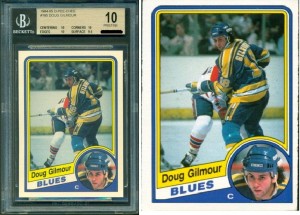 Larry Berman is a Hockey History Correspondent for TheHockeyWriters.com. His work has also been featured in The Hockey Hall of Fame Legends Program, The Hockey News, Beckett Hockey Monthly, Canadianhockeyonline.ca and Canadian Sports Magazine. He was inspired to follow the Ottawa Senators by his Grandfather who grew up in Montreal and was a fan of the original Senators franchise. He is also an avid hockey card and memorabilia collector.