Maple Leafs By The Numbers returns with the best player to wear the No. 7 for the Toronto Maple Leafs. Seven is one of the six numbers the Leafs have honored for two players. So that makes the choice easier.

Other Notable No. 7’s

Clancy was obviously good enough to get honored by the Leafs. How Lanny McDonald isn’t honored for what he did in his seven seasons with the Leafs is bewildering. Gary Roberts was one of the best Leafs in the early 2000s. However, none could beat the defenseman who wore the number for an amazing 17 seasons with the team.

While newer generation might only know Tim Horton because of the coffee & donut chain, he was one of the Leafs best defenseman for most of his 20 seasons in Toronto. The Maple Leafs signed Horton in 1948 and assigned him to play with the St. Michael’s Majors, one of the Leafs most popular feeder systems at the time. He played there for two seasons, playing 64 total games and recording 15 goals and 25 assists for 40 points. He would make his Maple Leaf debut in the 1949-50 season, playing one game, but spent most of the season and the next two seasons with the Pittsburgh Hornets of the American Hockey League. He would play four more games with the Leafs in the 1951-52 season.

He made his full-time debut with the Leafs the next season, playing all 70 games in the season. It would be the first of ten seasons in which he did not miss a single game. However, near the end of the 1954-55 season, he suffered a broken leg and jaw that cause him to miss all but 35 games the next season. Before he returned, there had been some thought that his career might have been over. Boy were they wrong.

Horton was known as one of, if not the strongest player in the NHL during his playing days. Bobby Hull once said,

“There were defencemen you had to fear because they were vicious and would slam you into the boards from behind, for one, Eddie Shore. But you respected Tim Horton because he didn’t need that type of intimidation. He used his tremendous strength and talent to keep you in check.”

That’s pretty good praise from one of the NHL’s best players of all-time. 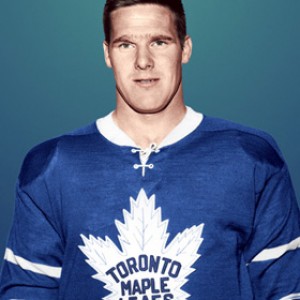 Horton would be with the Leafs for all four of their Stanley Cups in the 1960s. He played in seven All-Star Games and was on an end of season All-Star Team six times, three of them on the First Team. Although he never won the Norris Trophy as the NHL’s best defenseman, he finished in the top four of voting five times, coming closest in 1969 when he finished second. All in all, he played 1,185 games for the Leafs, scoring 109 goals and adding 349 assists for a total of 458 points. He also had nine goals and 41 points in 97 playoff games for Toronto.

He would later play for the New York Rangers, Pittsburgh Penguins and Buffalo Sabres. It was while with the Sabres that Horton’s career and life ended when he died in a car crash on February 21, 1974. His final game, the night before, was fittingly against the Maple Leafs. He was named as one of the games three stars in the Sabres loss to the Leafs. His No. 2 was retired by the Sabres in 1996.