Michael Del Zotto has been the Philadelphia Flyers’ best defenseman up until this point of the season. His 23:25 average ice time per game leads the team and is good enough for 28th in the league, he’s a valuable power-play quarterback on the second unit and he’s no longer a liability in his defensive end.

While Shayne Gostisbehere has stolen the headlines, Del Zotto is the one who has transitioned his game into valuable two-way play. His points total has taken a hit, but his contributions to the team have been more effective in his own zone.

The Flyers will play till the end of the season without Del Zotto, who is scheduled to have surgery on his injured wrist Friday and miss three to four months. Summed up, the only way Philly gets their number one defenseman back is if they make it deep in the playoffs.

The former New York Ranger has already missed the last four Flyers games and while the team has a 2-1-1 record in that stretch, Del Zotto’s play will be missed on the blue line as much as Sean Couturier’s  up front.

But his own contributions on the ice, which have ranged far, aren’t the only things the Flyers will be missing as Del Zotto heals.

The Play of Others

Del Zotto’s partner for most of the season has been Radko Gudas. Although the Czech native has been in the news for less-than-enviable reason of late, Gudas has also been an effective player this year with the Flyers.

When Gudas is on his game, he doesn’t need to go out and look for the open-ice hits that have gotten him in trouble. His board and net-front 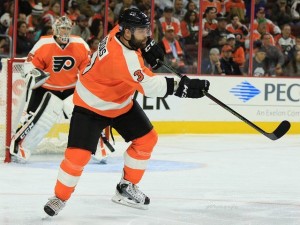 Radko Gudas’ play this season has been helped by Michael Del Zotto.(Amy Irvin / The Hockey Writers)

With Del Zotto’s surprisingly calm demeanor on the back end this season, Gudas wasn’t forced to make those questionable hits. For the first half of the season, Gudas was arguably the third-best blue-liner on the team behind Del Zotto and Gostisbehere.

Then there’s the obvious offensive load that Del Zotto takes off Gudas. Del Zotto is much better at making an outlet pass and his speed allows for him to skate the puck out of trouble easily, where Gudas regularly struggles with both.

However, Gudas has played well without Del Zotto lately. He’s averaged over 20 minutes a game in the four-game stretch, if the New Jersey Devils game where he was ejected in the first period isn’t included. And Gudas’s play could become more important in the next week.

Yesterday on Overdrive Bob McKenzie said that someone (he thinks the Sharks) offered two 2nd round picks for Radko Gudas.

There’s no way Del Zotto was being traded, barring an overpayment, but his injury could affect the Flyers’ plans moving forward.

Philly has four defensemen that logically could be on the trading block leading up to Monday’s deadline: Gudas, Mark Streit, Nick Shultz and Evgeny Medvedev. Andrew MacDonald is another, though finding a suitor would be near impossible.

With Del Zotto out for the rest of the season, that’s one less NHL-caliber defenseman they can play should they decide, or be able, to sell the rest of them. They could call up Mark Alt or veteran Davis Drewiske from the Lehigh Valley Phantoms, but eventually the Flyers will be icing a less-than-NHL caliber blueline.

The Flyers are undoubtedly worried about Del Zotto’s health more than anything, but it does put the team in a tough spot as decisions will have to be made in the coming days.