Each year, there are a few steals at the annual NHL Draft, when a team finds a hidden gem lost in the middle of the rankings.

The Los Angeles Kings may have found a diamond in the rough at the 2014 NHL Draft, when they selected Mike Amadio at 90th overall.

As a member of the North Bay Battalion, Amadio has emerged as one of the best all-around players in the OHL in 2015-16. Named captain of the team before the season began, Amadio has taken the role to heart, leading by example on and off the ice each day.

The native of Sault Saint Marie, Ontario is in his fourth OHL season, making significant strides each year. Drafted in the second round, 36th overall, in the 2012 OHL Priority Selection by the Brampton Battalion, Amadio has quickly driven himself up the depth charts of the Kings system through his impressive two-way game, which sees him succeed in both sides of special teams.

He spent his midget season playing in the Great North Midget Hockey League, again for his hometown team, the Sault Ste. Marie North Stars. In a league which once featured future NHL stars like Ron Francis and Andrew Brunette, Amadio obliterated his competition, scoring 32 goals and 62 points in 29 games.

Those impressive years caught the eye of many OHL scouts, and as a result, the Brampton Battalion would select Amadio 36th overall in the 2012 OHL Draft. The following year, Amadio would make a seven hour drive along the Trans-Canada Highway, and head south, into the major cities of the Greater Toronto Area to make his OHL debut.

Rookie and Sophomore Years in the OHL

Making a drastic life change to the bustling city of Brampton, Amadio would have a promising rookie season. As a 16-year-old, he would score six goals and 19 points, but it was his all-around game that drew the ire of head coach, Stan Butler. Amadio proved that he could be relied upon to win key face-offs, as well as effectively kill penalties, both attributed to his exceptional work ethic.

The following season, 2013-14, was a much more comfortable one for Amadio. The Brampton Battalion would relocate to North Bay, a little closer to home for the 17-year-old, and also into a style of city he would be much more accustomed to. The change had a positive effect on Amadio’s game, as he would double his goal and point totals to 12 and 38, respectively. In the all important NHL draft eligible year, Amadio earned more ice-time playing further significant roles. He would play both special teams with success and began to assert himself him the 2014 NHL Draft rankings.

Heading into the 2014 NHL Draft, Amadio was projected to be a third-fourth round pick. In the final rankings from Central Scouting, he was ranked 68th among North American skaters. Deep into the third round, it was expected that Amadio could be selected at any time.

Such an honour to be selected by a great organization @LAKings , excited for a new beginning!

Becoming One of the Best in the OHL

In the season after being drafted, Amadio continued to make leaps and bounds in all facets of his game. Becoming one of the leaders of the team, he would be implemented into all key situations. By year’s end, he scored 24 goals and led the Battalion in points with 71, while pushing North Bay to the Eastern Conference Finals, where they were ousted by the eventual Memorial Cup champion, Oshawa Generals, in six games.

One year later and Amadio was now the caption of the Battalion. With much of his surrounding cast moving on to new opportunities, Amadio was really expected to lead the charge, both on and off the ice. And what an exemplary job he has done. Not only is Amadio leading North Bay in all offensive categories, but he continues to perfect his defensive game as well.

In this clip, you can not only appreciate the release and power of Amadio’s improved snap shot, but the accuracy of it as well, as he snipes home the puck over the goaltender’s shoulder. 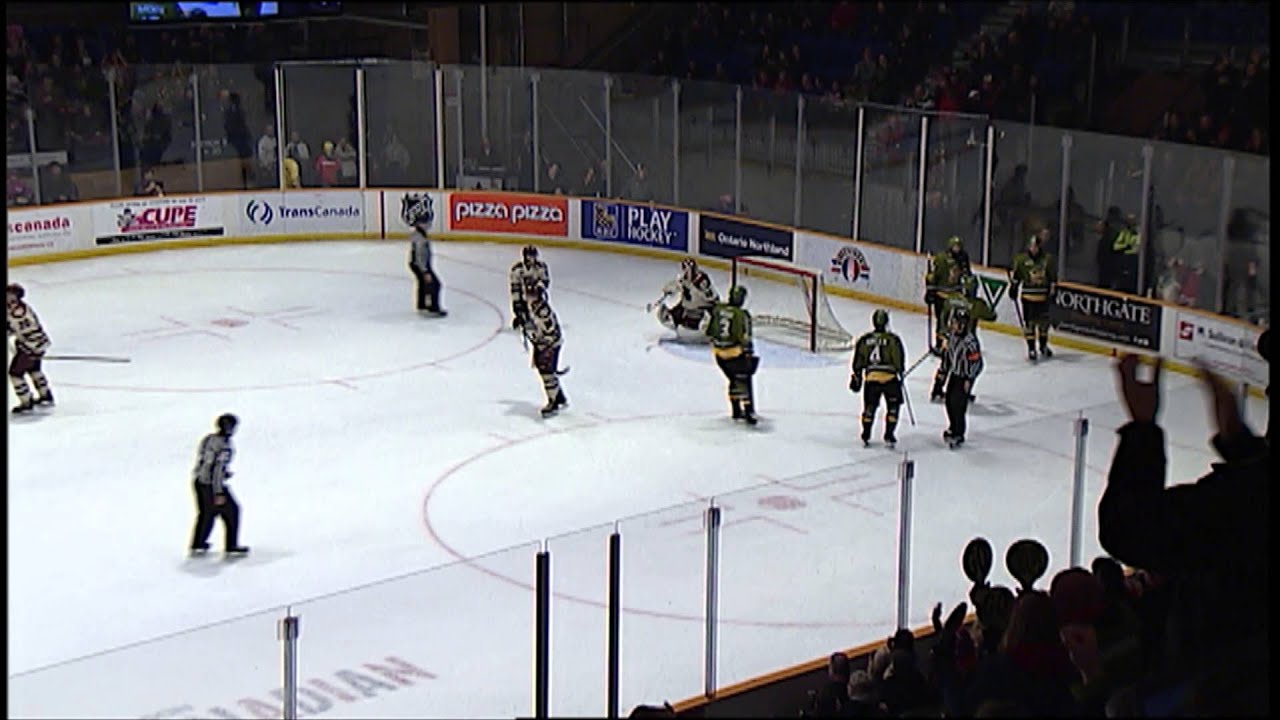 Through 57 games, Amadio has racked up 43 goals and 86 points. His goal total is second in the league to only Christian Dvorak, who has 44, and he sits fifth in the OHL in points. Amadio is currently just four goals back of the franchise record for goals in a season, set by Wojtek Wolski in 2005-06, when he scored 47.

When asked about Amadio’s consistent development over the past four years, North Bay assistant coach, Ryan Oulahen, had this to say.

The big thing with Michael is that over the course of his career he has continued to improve his overall strength,” Oulahen said. “He has been able to be harder on pucks, win 1-on-1 battles and most importantly, his shot has turned into a weapon. Michael excels with his vision of the ice and is able to put himself in great scoring chances. Add that to the improvement of his strength, you now are seeing an elite goal scorer.

A significance to Amadio’s game that really sets him apart among other prospects is his terrific all-around game, namely on special teams. As the Battalion’s top penalty killer, Amadio not only protects his own zone, but establishes an offensive presence that not many others that can do while remaining defensively responsible. Amadio currently leads the OHL in both shorthanded goals, with seven, and shorthanded points as well, with 13. He also remains on the top power play unit for North Bay, leading the team in goals and points on the man advantage, with eight goals and 27 points.

As a centerman, Amadio is relied upon to take all key face-offs for his squad, as well. As the season wears on, he continues to work on and improve his skills at the draw. As a result of his hard work, he has become the leader in face-off wins in the OHL, with 715.

As Amadio matures in his OHL career, he continues to grow each and every day. His work ethic is second to none, always working on areas of his game that may need slight improvements. The most notable enhancement to his game in 2015-16 has been on the offensive. Amadio has tremendous vision of the ice and awareness to understand when and where plays are developing. With that, he is able find and create open ice for teammates, as well as take advantage of any defensive lapses by his opponents.

Perhaps the most exciting thing for Kings fans is the maturing of Amadio’s shot into a scoring weapon. He has grown stronger over the years, and with that, his shot has become a powerful and accurate one. His wrist shot should be considered elite now, as he again shows the intelligence to change shooting angles in order to create holes in the goaltender.

Amadio was initially a defensive stalwart for the Battalion before developing offensively. He still remains loyal to playing a 200-foot game, using a smart stick to break up plays and having the patience to be certain that each breakout is clean. Again, Amadio use his vision of the ice to read plays effectively and shut down any potential opportunities for opposing teams.

At 6’1, 196 pounds, Amadio doesn’t shy away from engaging in puck battles, using his lower-body strength and stick to come away with pucks. Not to mention, Amadio possesses excellent leadership abilities, noted by his captaincy. He is a fan favourite for his work and dedication, and leads by example in the locker room.

What Does Amadio’s Future Hold?

In summary, Amadio is a very exciting, all-around center who should have a lengthy NHL career ahead of him. He excels in every aspect of the game, and really has no down sides. After completing his fourth OHL season, Amadio will likely spend the 2016-17 season in the AHL, with the Ontario Reign.

Amadio will likely spend approximately two years in the AHL, before making a permanent jump to the NHL. One note to take on Amadio would be to not get discouraged if his offensive numbers see a sharp decline in his first professional season.

A fair projection for Mike Amadio’s NHL career would be as a second or third line center, who can play both special teams effectively, as well as take some key face-offs. Offensively, you can expect Amadio to score around 20 goals and 50 points per season, once he has adjusted to the league.