Eric Staal, Zach Parise and Jonas Brodin also scored for Minnesota, which was coming off a 7-1 win over Montreal on Tuesday. Niederreiter added an assist and has four goals in the last three games.

Denis Malgin scored his second goal of the season for Florida. James Reimer stopped 21 shots for the Panthers, who are winless in their last four games.

The Wild had lost five of six games and were looking for a spark in Tuesday’s game against the Canadiens. With captain Mikko Koivu injured, Minnesota coach Bruce Boudreau moved Charlie Coyle to centre between Parise and Niederreiter. 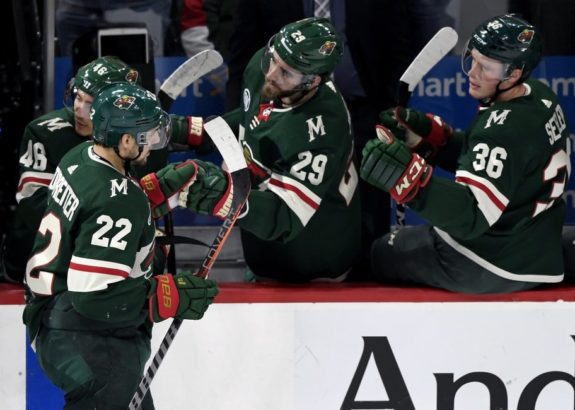 The line combined for three goals against Montreal, and they were on the ice for four of the five goals Thursday. Niederreiter, who opened the season without a goal in 14 games and had just three through 28 games, scored for the third straight contest as the Wild erased another early deficit.

Malgin scored 2:20 into the game on a rebound that Dubnyk kicked wide.

Niederreiter scored off a pass from Suter, tying the game before the first intermission. Niederreiter then crashed the net and tipped a shot by Suter past Reimer midway through the second for his sixth goal of the season.

Staal scored his 12th of the season on a nifty pass through the defence by Mikael Granlund. Minnesota scored twice in the first 3:51 of the third, with Parise scoring his 15th and Brodin his fourth of the season.

Florida has allowed five goals in three of its last four games.

NOTES: Koivu has skated with the team, but he missed his third game with a lower-body injury. … F Anthony Greco was recalled by Florida from Springfield of the American Hockey League and made his NHL debut. Greco had 12 goals in 24 games for Springfield. … Wild opponents have scored first in 21 of the team’s 31 games this season. Minnesota is 11-9-1 in those games. … Florida is one of two NHL teams (Vegas) that has not earned a regulation win at Minnesota’s Xcel Energy Center. The Wild are 10-0-1 at home against the Panthers, their longest active home point streak against any team. … Granlund’s assist was his 300th career point. He ranks sixth in scoring in team history.

Panthers: Home against Toronto on Saturday.