Jordan Greenway also scored his ninth goal for Minnesota, which handed the Blue Jackets their second straight loss. Newcomers Pontus Aberg and Victor Rask had assists for their first points with the Wild since being traded earlier in the week from Anaheim and Carolina, respectively. 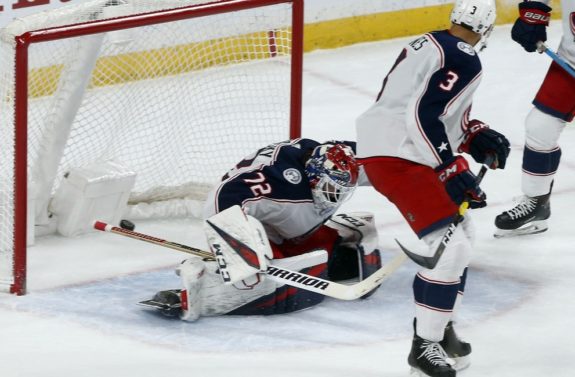 It wasn’t the way the Blue Jackets wanted to enter the All-Star break, especially after Friday night’s home loss to Montreal knocked them out of the top spot in the Metropolitan Division. Off to their second-best start in franchise history, the Blue Jackets entered the game 14-3-1 when coming off a loss this season.

But they couldn’t muster much offence against a Wild team that was 1-3-0 after a listless 3-0 loss to Anaheim, and scrapping to stay in the Western Conference playoff race. Minnesota outshot Columbus 31-20, including 15-6 in the second period.

Minnesota scored first for only the 18th time in 48 games when Greenway took a pretty pass from Eric Staal at 16:07 of the first, and fired a sharp one-timer from the left circle past Bobrovsky. Eighty-nine seconds later, Parise made it 2-0 when Aberg tried to clear the puck from behind the net. His attempt appeared to hit off a defender’s skate and went right to Parise, who scored from the slot.

Panarin scored on a wrister from the left circle at 3:07 of the second period. Dubnyk was screened by Nick Foligno on the shot.

NOTES: Columbus had only six shots in the third period. … Parise has scored 20 goals in nine of 14 NHL seasons. . The Wild improved to 13-2-1 when leading after two. . Rask’s introduction to the home crowd was a bit anticlimactic. He served a two-minute penalty when Minnesota was whistled for too many men on the ice at 2:20 of the first period.

Blue Jackets: Off for the All-Star break, then hosting Buffalo on Jan. 29.

Wild: At Vegas on Monday.

Kings Look for Redemption After Opening Night Loss to the Wild

Blues Who Have Point-per-Game Potential

Canadiens Must Stick with Edmundson over Mete for Now