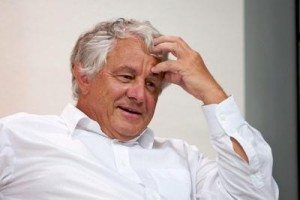 It is one thing when only a vocal small core of die hard fans of a franchise are calling for an upheaval of management. It is another when over 90% of the Facebook comments shown at the bottom of owner Hasso Plattner’s letter on the Sharks website are calling for the removal of GM Doug Wilson.

Even casual Sharks fans are voicing complaints about the Sharks management team and ownership group and it isn’t difficult to understand their frustrations. If you click on the link above, one part of the owner’s letter reads, “We got fortunate when we acquired Joe Thornton in a trade and had with Todd McLellan an excellent head coach.” First of all, what does the 2005 trade for Thornton and having McLellan as head coach have to do with each other? That sentence just reads incredibly awkward. In particular, the portion “and had with Todd McLellan” sounds like the German owner didn’t have much of a proofreading team. Plattner reaches out to Sharks fans extremely infrequently, you would think a better message would have been crafted. If the owner is sending out half-assed letters, what does that say about the rest of the organization’s ability to correctly identify problem areas of the franchise?

Speaking of the rest of the organization, neither Wilson nor COO John Tortora are held accountable for their decisions. Neither one comes off as transparent as they attempt to claim. First and foremost regarding Tortora, there was last offseason’s decision not to renew the contract of beloved television analyst Drew Remenda. The Sharks must be ecstatic that this unjustified move didn’t get more groans from the fan base. Tortora gave only a vague “want to take the broadcast in another direction” hogwash explanation as to why Remenda wasn’t brought back. The truth is Remenda wasn’t brought back because he was too openly critical of the team. That means the organization thinks they are better off with what many refer to as “yes men” that do whatever the bosses believe is best and lies to the fans instead of giving honest commentary. Of course Tortora will never admit that is why Remenda left because it is a dumb reason to fire a beloved commentator. Fans tuned into Sharks games because Remenda was a huge help in putting on an entertaining broadcast. Without him, the broadcast wasn’t as good, the team struggled and no longer sold out every home game this season. The reasoning behind Remenda’s dismissal isn’t just conjecture, this is direct from my sources who are past and present Sharks broadcast employees. Tortora’s decision and lack of reasoning for it is a total lack of accountability from the COO.

As for Wilson, the GM clearly upset Thornton, and Joe Pavelski when he made the comments about Thornton lashing out as captain to season ticket holders. Did Wilson apologize for making those comments? Nope. Never did. He stood by them and attempts to claim through his fake smile that his relationship with Thornton is just fine. Ummm, sorry Doug but not a soul believes what you are selling in terms of a rosy relationship with a player you have routinely thrown under the bus the past 12 months. Thornton told you to stop lying, and you should have heeded that advice, but for some misguided reason you haven’t. The loss the Los Angeles Kings last spring really changed something in Wilson. He has done a complete 180 from standing by his two biggest names in Thornton and Patrick Marleau to wanting them both gone. The same GM who says it isn’t smart to overreact to a small amount of games has done just that with last season’s loss to LA. As if the Sharks lost only because the top guys struggled the last few games and the injury to Marc-Edouard Vlasic had nothing at all to do with the outcome. These guys win as a team and lose as a team but in Wilson’s eyes his top scorers were the only ones to blame for the epic collapse. During the last home game of the season, many fans claim they could hear chants of “fire Wilson” throughout the arena.

Flip forward to the current offseason and highly thought of head coach Todd McLellan elected to leave the Sharks organization. It isn’t surprising why he would choose to leave, and yet he is keeping his family in San Jose. The easier route would have been to just remain as Sharks coach and not have to spend time away from his family. That is a clear sign of just how dysfunctional the Sharks front office has become. A highly regarded head coach is keeping his family in the Bay Area but still wants to leave to coach another team? Something must be seriously wrong with the organization for McLellan to leave the team but keep roots in the area.

In that same letter referenced above Plattner mentions the poor TV deal that “Sharks management signed awhile ago.” The tone of this statement sounds as if this is something Sharks fans are supposed to feel sorry for. But why should they? How bout some accountability from the Sharks management? Why don’t they issue a formal apology for signing such a bad deal? Even if key pieces of management who signed the deal are no longer with the organization, either Tortora or Plattner should issue an apology for the incompetence that went into signing such a bad deal. Plain and simple these are the things fans would appreciate but that Sharks management from ownership on down isn’t willing to do. They aren’t willing to admit mistakes, admit the truth, and apologize. They only want to spin everything in a positive light when clearly there are boatloads of things wrong with the organization right now. Fans just want the truth, and they can certainly handle it because they already know what it is, they just wish the higher ups of their beloved team would acknowledge that truth.

There is absolutely nothing rosy about the Sharks right now and the very least the front office team could do is admit that that a lot of unnecessary drama has gone on over the last year. As Thornton said about Wilson, the front office as a whole needs to “stop lying.”