After a long offseason, OHL hockey has finally returned. However, that offseason was shorter than usual for the Mississauga Steelheads, who will enter the 2017-18 season as reigning Central Division and Eastern Conference Champions.

It was the longest playoff run in Steelheads history, and the third Finals appearance for the city of Mississauga. The IceDogs were swept by the Guelph Storm in the 2003-04 Finals, and the St. Michaels Majors lost in overtime of Game 7 to the Owen Sound Attack in 2010-11.

As the Steelheads look forward to defending their conference title, they will have a roster that has the potential to dominate and return to the Finals in 2017-18. Although, many of their stars are still competing for a spot in an NHL training camp, so their status for the season is still up in the air.

The Steelheads will open the 2017-18 season with a banner raising ceremony on Friday, September 22nd against the Ottawa 67’s.

Which Steelheads Will Crack the NHL?

A number of Steelheads have been very high NHL Draft picks over the past couple of years. As a result, a great portion of their 2017-18 lineup remains at NHL training camps for the time being.

In New Jersey, Michael McLeod and Nathan Bastian continue to battle for a roster spot. The Devils have a few holes in their forward corps, and McLeod is thought to have a decent chance to earn at least a few games in the regular season. Bastian will likely be returned to Mississauga. 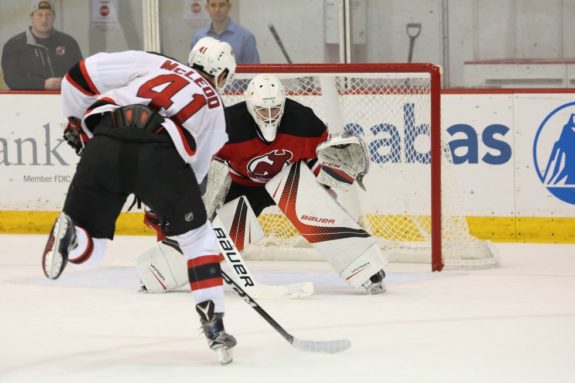 Owen Tippett, 2017’s 10th overall pick in the NHL Draft, has been a highly touted prospect by Florida Panthers’ management all summer and may be able to crack their opening night lineup. Nicolas Hague, a second-round pick by the Vegas Golden Knights, had a good rookie camp but should be back in Steelheads blue and white within the next week or so.

The last two of four 2016 NHL Draft picks on the Steelheads’ roster include: Jacob Moverare, who remains in Los Angeles with the Kings but should be back in Mississauga on the team’s top pairing; and Austin Osmanski is battling it out with the Buffalo Sabres but will return to the team in a key role as well.

A couple of free agent invitees looking to earn NHL contracts are Shaw Boomhower and Trent Fox. They have been impressive in camp with the Dallas Stars and Columbus Blue Jackets, respectively, but will be back with the Steelheads for the upcoming season. On September 19th, Boomhower was released from his tryout.

In all, McLeod and Tippett seem to have realistic shots to stick with their NHL teams for at least a trial period, while the rest should be back with the Steelheads.

First-rounder, 14th overall, Thomas Harley will crack the Steelheads roster and should find consistent ice time, giving the team great depth on the blue line. Harley is a two-way defenceman with offensive upside. Drafted from the Vaughan Kings of the GTHL, Harley racked up five goals and 24 points in 35 games. Already standing at 6’2″, the left-handed defender has plenty of room to fill out and is listed at 154 pounds. 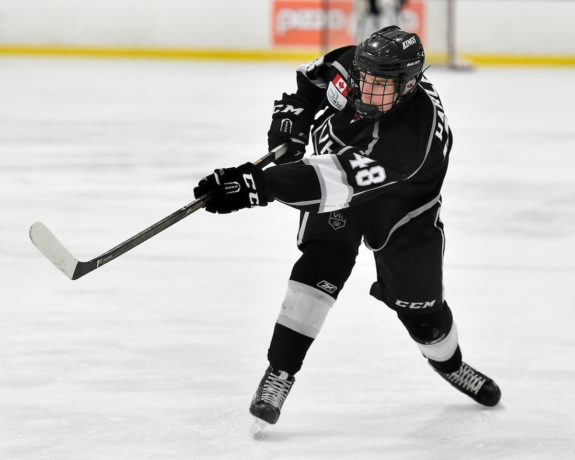 Thomas Harley has a chance to mke an immediate impact on the Steelheads’ blue line. (Photo by Aaron Bell/OHL Images)

At 30th overall, the Steelheads selected Keean Washkurak from the Waterloo Wolves out of Alliance. A smart, two-way center, Washkurak tallied 17 goals and 38 points in 32 games. Listed at 5’11”, 159 lbs, he has committed to the Steelheads, but may have a tough time maintaining a spot in the everyday lineup, as Mississauga could have up to 13 returning forwards.

Cole Schwindt, a fourth rounder, was drafted out of the Alliance’s Kitchener Jr. Rangers, where he added 12 goals and 27 points over 31 games. The right winger has signed with the Steelheads and will likely be a player who can jump in and out of the lineup, especially in case of injuries.

In the seventh round, 121st overall, the Steelheads selected Adam Varga from the Washington Little Caps U15. He spent time playing in three leagues last year, totalling 46 goals and 79 points in 48 games. Varga has committed to the Trout and at 6’2″, 159 lbs, he could become an impact player instantly. He also put up four points in four preseason games.

Goaltender, Matthew Dunsmoor, was drafted in the eighth round from the Guelph Jr. Gryphons of the SCTA. Voted the SCTA’s Player of the Year, Dunsmoor allowed just 1.80 goals per game over 20 starts. Although relatively small at 5’9″, Dunsmoor is a strong kid who comes in at 205 lbs. He has committed to Mississauga and will be the team’s third goaltender for the 2017-18 season, ready to be called up in case of injury.

In the 2017 CHL Import Draft, Mississauga drafted Albert Michnac with the 37th overall pick. Michnac, an 18-year-old center from the Czech Republic, scored 15 goals and 39 points in 65 games with the Guelph Storm during 2016-17. He will jump into a key role with the Steelheads right away. 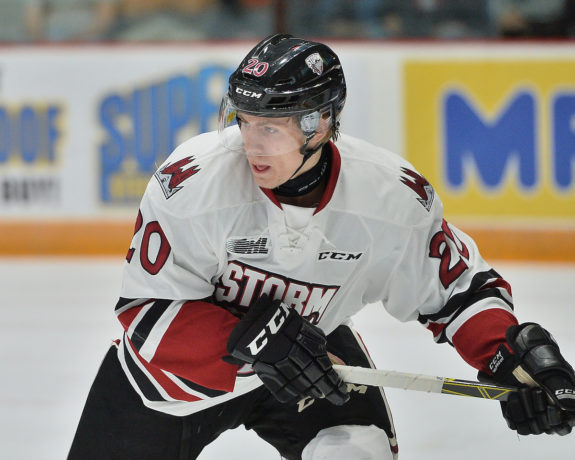 Albert Michnac was a first-round selection by the Trout in the 2017 CHL Import Draft. (Terry Wilson / OHL Images)

In the inaugural OHL U18 Priority Selection, the Steelheads selected 18-year-old, Cameron Gaylor, from the Don Mills Flyers in the GTHL. Gaylor, a 2018 NHL Draft-eligible prospect, added seven goals and 23 points in the 2016-17 season. He has committed to the Steelheads for this year, hoping to make a smooth transition to the OHL.

On August 2nd, the Steelheads made a move with the Kitchener Rangers that sent two second round picks in 2018 and 2021, as well as a conditional pick in 2023 in exchange for 17-year-old defenceman, Merrick Rippon. Originally a second round pick by the Rangers in 2016, Rippon spent the 2016-17 season in the CCHL with his hometown Ottawa Jr. Senators, where he added eight goals and 33 points in 59 games. A responsible, smooth skating defender with offensive upside, Rippon is eligible for the 2018 NHL Draft.

Later, on August 26th, Mississauga traded a fifth rounder in 2020 and a sixth rounder in 2018 in exchange for goaltender, Emanuel Vella. The 19-year-old has played in parts of three OHL seasons, totalling 22 games played. The 6’3″ native of Toronto will serve as the Steelheads’ backup for the upcoming season.

Key Departures From the 2016-17 Steelheads

Most notably, the Steelheads lost their general manager, James Boyd, in the offseason. Boyd was the Steelheads’ head coach and general manager for five years between 2011-12 and 2015-16 before stepping back from his coaching role to focus on being GM in 2016-17. Boyd has moved on, accepting a role as the Ottawa 67’s GM.

An offensive dynamo, Spencer Watson’s talent will be truly missed in 2017-18. Acquired in a trade from the Kingston Frontenacs, Watson spent one year in Mississauga, tallying 43 goals and 78 points in just 61 combined regular season and playoff games. The 21-year-old is set to move on to the AHL with the Los Angeles Kings’ affiliate, Ontario Reign.

Perhaps the most influential departure from last season is of defenceman, Vili Saarijarvi. The 20-year-old was phenomenal for the Steelheads during his short tenure. Following an injury plagued first-half, Saarijarvi added 16 goals and 46 points from the backend in 54 regular season and playoff games. 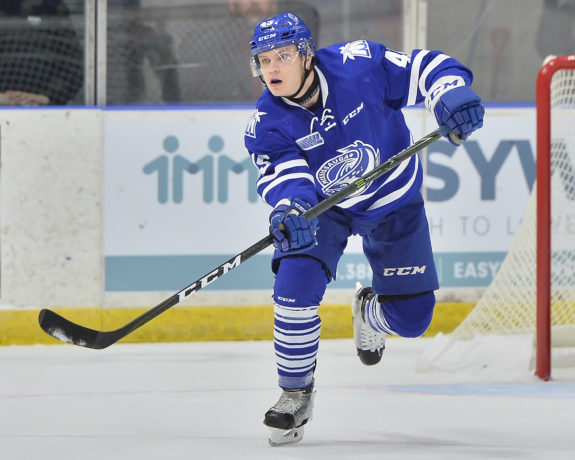 Vili Saarijarvi was a game-changer in his short time with the Mississauga Steelheads. (Photo by Terry Wilson / OHL Images)

Another reliable defender, Stefan LeBlanc has moved onto the AHL, signing a contract with the Montreal Canadiens’ affiliate, Laval Rocket. LeBlanc, 21, spent four seasons and 220 games with the Trout, setting a career-high in points with 37 during 2016-17.

Veteran leader, Marcus Dickerson has also left the team after three seasons for an opportunity with the USHL’s Waterloo Black Hawks. Dickerson, 19, played in 151 games for the Steelheads, tallying 8 goals and 13 points in his time.

Depth forward, Scoley Dow, will no longer be with the Steelheads in 2017-18 either as he has decided to play with the OJHL’s Georgetown Raiders. Dow, 18, played in 46 games in 2016-17, his only year in Mississauga, adding five goals and 12 points.

In all, the Steelheads look to have a very strong lineup for the 2017-18 season. Depending on whether McLeod and Tippett return, this team could potentially dominate the Eastern Conference. After swimming upstream for the majority of the first half of last year, Mississauga finally found their groove before tearing it up in the second half. 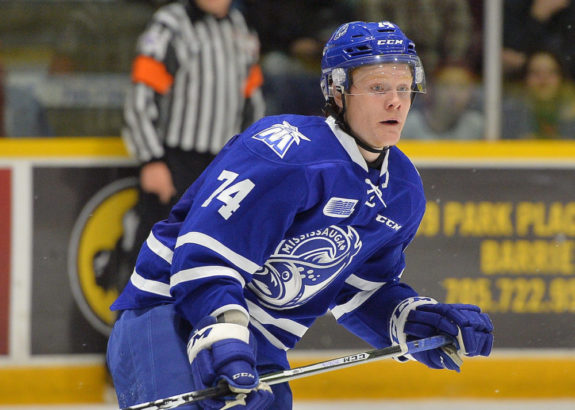 Owen Tippett would be a favourite to league the OHL in goals in 2017-18 if he returns. (Photo by Terry Wilson / OHL Images.)

While they have lost a couple of key components, they have also restocked on the fly. Rippon should be able to take over in Saarijarvi’s place, and the Trout boast a number of younger forwards who can step into depth roles and make an impact.

Up front, Mississauga could be deadly. With a solid mixture of veteran skill and talented youth, the lineup has scoring throughout all four lines. On the back end, Hague, Rippon, and Moverare should provide exciting two-way plays. And, of course, between the pipes will be Jacob Ingham for the vast majority of starts. The 17-year-old was very impressive in his rookie campaign and is considered one of the top goaltenders eligible for the 2018 NHL Draft.

Islanders Can Benefit From Shortened 2020-21 Season