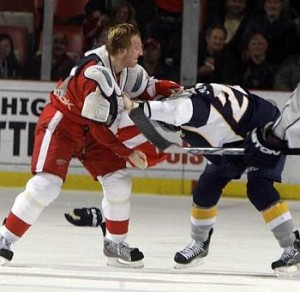 The shocking realignment announced on Monday has put the Nashville Predators behind a very big rock.  I have not seen information on the real vote, but if the Predators voted for this alignment, they should have their intelligence checked.  The conference that Nashville will be in also has Chicago, Detroit, Minnesota, Dallas, St. Louis, Columbus and Winnipeg.

The new realignment is also said to have the top four teams from each Conference make the playoffs.  This is an almost insurmountable task for the current Nashville team.  The design and makeup of this team must be reviewed before the realignment takes place.  Any question to the validity of that statement is answered by the current Western Conference playoff standings as of the end of the day on December 5th.  The top four (based on playoff seeding) are Minnesota, Chicago, Dallas and Detroit.  The 6th place Western Conference team is the St. Louis Blues.

In order for Nashville to be competitive in their new conference they have to consistently beat the high-powered offenses in Chicago and Detroit.  The Predators will also have to consistently beat the stingy defenses in Minnesota and St. Louis.  In planning to compete consistently in a conference against those teams, General Manager David Poile has a living nightmare.    The consolation prize is that Nashville will only have to find a way to be better than two of those teams each year to make the playoffs, however that does not seem to be much of prize.

The first challenge is determining which Nashville Predators team they now have.  The team has gone 2-5-1 in their last 8 games.  In the earlier 11 games before that span, the team went 8-1-2.  If statistics are any indicator what the team really is, I am a fan of goals per game and goals against per game.  Nashville ranks 18th in the league in goals per game and 15th in goals against.  Both are indicators of a mediocre team that lacks neither the offensive potency nor the defensive and goalie grit to be remarkable.

The problems on ice in Nashville, compounded by the backbreaking realignment amplify the decisions that must be made in regards to Shea Weber and Ryan Suter.  If the team locks up both of their star defense men to long-term large contracts, how much will be left for offense?  Additionally, the combination of Weber, Suter and Rinne are the three-headed monster that’s publically responsible for the 15th best goals against average in the league.  Assuming a total contract price, per year, of $21 million for all three, that’s the most overpriced “average” defense I can fathom.

Some very difficult decisions need to be made in Nashville.  The front office needs to plan, much more so than just this season.  One or two missteps could put this team behind the curve for years to come.  It is about more than making a push to make the playoffs this year, but rather about how to stay competitive for years to come.  David Poile’s tie must be feeling tighter since the realignment announcement was made.  As a finalist for general manager of the year the last two years, he’s proven his medal before.  The question remains, does he have the ability to put together a team for years to come?

1 thought on “Nashville Predators Better Plan for the Realignment”