It was do or die on Monday night and when their backs were against the wall, the Nashville Predators came out swinging. More specifically, Filip Forsberg showed up in a big way. The first line was producing but each member had a specific role in powering the Predators to force a Game 7.

Viktor Arvidsson was buzzing around the net and was a workhorse in the corners. Ryan Johansen played the most complete game of his life, with some sublime defensive moments coupled with minutes of offensive zone puck possession. Then there was Forsberg, who showed up by putting points on the board.

The Predators are heading back to Nashville for Game 7 by the grace of their top line, but Forsberg did a lot of the heavy lifting. Let’s dive a little deeper into the numbers to see just how good he was.

All Forsberg Does Is Score Big Goals

Forsberg was all over the scoresheet last night as he scored two highlight reel goals. His first was a beautiful power move where he gained an inside edge on Ben Chiarot and then muscled his way to the net. While putting Chiarot on his back, Forsberg was able to get a deceptively strong shot off that beat Jets goalie Connor Hellebuyck on the strong side.

It was a bit lucky that the puck came to Forsberg as he was behind the defense, but scorers make the best of the opportunities given to them. Overall, it was an excellent individual effort that highlighted a few of the reasons why Nashville loves him.

The second goal was even prettier, as the Winnipeg Jets made the terrible mistake of leaving Forsberg unguarded in the slot. Jacob Trouba dumped Forsberg in front of the net and then inexplicably left him to pressure Arvidsson in the corner. Arvidsson saw that this defensive miscue had left his fellow Swede all alone in the slot and made a quick pass out to him. Forsberg made the Jets pay by using the time and real estate to put the puck between his legs before firing it past Hellebuyck.

His assist was on Arvidsson’s empty net goal, which isn’t much to talk about. But it all lends itself to the point that Forsberg was involved in just about every goal that the Predators scored during Game 6. Even on Arvidsson’s first goal of the game, Forsberg was drawing the opposing center higher in the slot by opening himself up for a pass. Roman Josi was given a few extra seconds to take the shot because of this, which led to the great tip by Arvidsson. He dominated and led the Predators at even strength with eight shot attempts, five shots, six individual scoring chances created, and four individual high danger chances created, two of which were converted on.

Easy to See Forsberg on the Stat Sheet

While Forsberg’s individual impact on the score sheet was huge, his impact on the pace of the game was even bigger. The Predators played trap hockey after they scored their first goal. That’s about 58 minutes of defensive hockey that attempts to kill the opponent by boring them to death.

The fact is that most of the Predators did not often attempt offensive zone possession, as the scoring was left to the top two lines. Unfortunately, the second line is playing dismally and can’t score to save their lives but the first line made up for it. So, without further ado, let’s go the chart where all stats are at even strength. 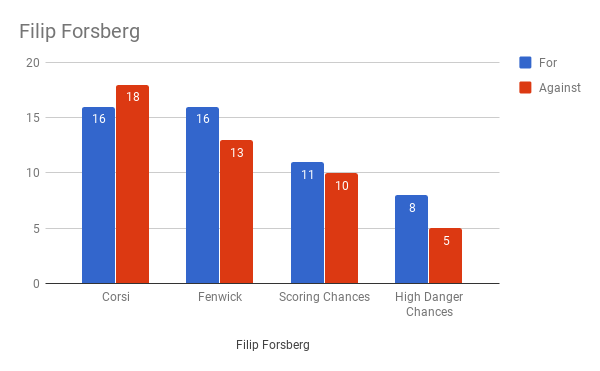 As the game drew on and the trap grew stronger, the Predators relied even more upon the first line for offensive zone presence. That’s why, despite having a negative Corsi, Forsberg was over 10% better relative to his team’s average. Same goes for his Fenwick and high danger chance ratio, although every Predator had a scoring chance ratio around 50%. Nevertheless, what separated the first line from the rest of the pack was their ability to get to Hellebuyck. After all, they had eight of the 10 high danger chances created by the Predators at even strength.

I’ll be honest, I hate the trap. It’s the worst thing to happen to hockey and produced the dreaded “dead puck era” that controlled the NHL for much of my childhood. Seeing the Predators use it scares me because I feel like it’s destined to fail if the top six cannot put points on the board.

While Forsberg seemed to will his team to victory in Game 6, I’m not sure it will work in Game 7 or beyond. Especially with how fast teams are playing, the slowest team of the final five is probably the Washington Capitals, who can score in just about every way possible.

Before I get ahead of myself, the Predators will have to go through the Jets in Nashville. They’ll have the benefit of the last change, and will hopefully use it to shelter some of their underperforming offensive talents. The road ahead isn’t easy, but if the Predators can get a similar performance out of Forsberg, I’d feel pretty safe in predicting their victory.