The right wing, who leads the Devils with 14 goals, had not scored in his last 13 games against the Kings and had only two goals in 18 meetings. Both goals Thursday beat Jonathan Quick on his glove side. 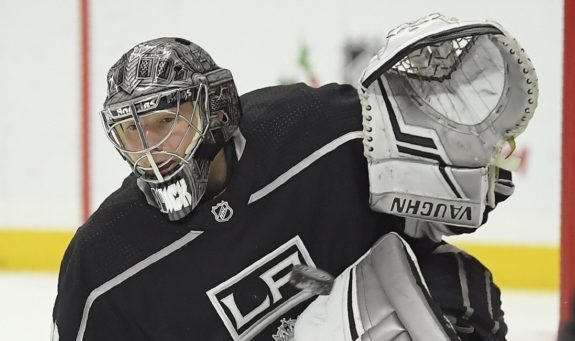 Taylor Hall had three assists while Travis Zajac and Will Butcher each had a goal and an assist. Nico Hischier and Blake Coleman also scored for the Devils, and Keith Kinkaid made 29 saves.

Brendan Leipsic, Adrian Kempe and Kyle Clifford scored for the Kings, who have dropped four of five and are last in the NHL with 21 points. Quick stopped 29 shots.

The Devils opened the scoring with six minutes remaining in the first period on the power play when Palmieri took a pass from Hall and beat Quick. The Kings evened it two minutes later as Leipsic scored his first goal with the club and third of the season on a wrist shot from just inside the right circle that went through Kinkaid’s legs. The left wing was claimed off waivers from Vancouver on Monday and was playing in his second game for Los Angeles.

Zajac put the Devils up 2-1 just 25 seconds into the second when he put a loose puck past a sprawling Quick for his ninth. The Kings evened it again six minutes later when Kempe took a pass from Drew Doughty and tapped it past Kinkaid for his fourth. The assist by Doughty gave him 334 for his career and made him the franchise leader among defencemen, surpassing Rob Blake.

Palmieri beat Quick to his glove side again midway into the second to give the Devils the lead for good with a snap shot. Butcher made it a two-goal lead for the Devils when he took a pass off the boards from Miles Wood and fired a shot from near the blue line that ended up deflecting off the stick of Kings defenceman Dion Phaneuf for his second.

Clifford drew the Kings to 4-3 late in the second with his fifth when Kinkaid was unable to clear the puck. Hischier then got his sixth when he was able to redirect Sami Vatanen’s shot past Quick.

Coleman added an empty-net goal for his ninth.

NOTES: RW Nikita Scherbak’s debut with the Kings was pushed back another game due to visa delays. The 23-year-old Russian, claimed off waivers Sunday from Montreal, could be on the ice for Los Angeles’ next game Saturday. … Zajak’s goal was only the ninth time since 2000-01 that the Devils have scored in the first 25 seconds of the second period. … Kempe has two goals in his past three games.