After several years of financial uncertainty, the New Jersey Devils were saved on August 15th, 2013 when Joshua Harris and David Blitzer, also co-owners of the NBA’s Philadelphia 76ers, took control of the Devils and their seven-year old arena, the Prudential Center.  Also entering the organization were Chief Executive Officer of the team and the arena, Scott O’Neil, and President of Business Operations, Hugh Weber.  Despite the turnover at the top of the hierarchy one man was left untouched, Lou Lamoriello, the Devils President/General Manager since 1987.  With the Devils new owners and new leadership came a shift in the way the organization would conduct business on and off the ice.

The optimism about the change could be felt the moment they were introduced at a Prudential Center press conference.  From adding more members to the Fan Experience Team, a dedicated group of representatives that work with the Devils season ticket holders, to infusing much needed financial security, it became clear the Devils were heading in a new and more secure direction.  However, after the Devils Army entered the arena for their home opener against the New York Islanders on October 4th, 2013, they would be in for quite a surprise.  After Damien Brunner opened the scoring for the Devils, the fans realized their new leaders were serious about change.  Blaring from the arena sound system was not their traditional “Hey” song (“Rock and Roll Part Two” by Gary Glitter), but Bon Jovi’s “This is Our House.”  The fan reaction that followed would have led one to believe the Islanders had actually opened the scoring.  The goal song that followed Devils goals dating back to their first Stanley Cup Championship in 1995 (with a hiatus from 2006-2008) was about to change for good (and for the better) due to a trend in recent years.  To determine on your own what that trend was, compare the crowd reaction during the goal song from the following two videos below: 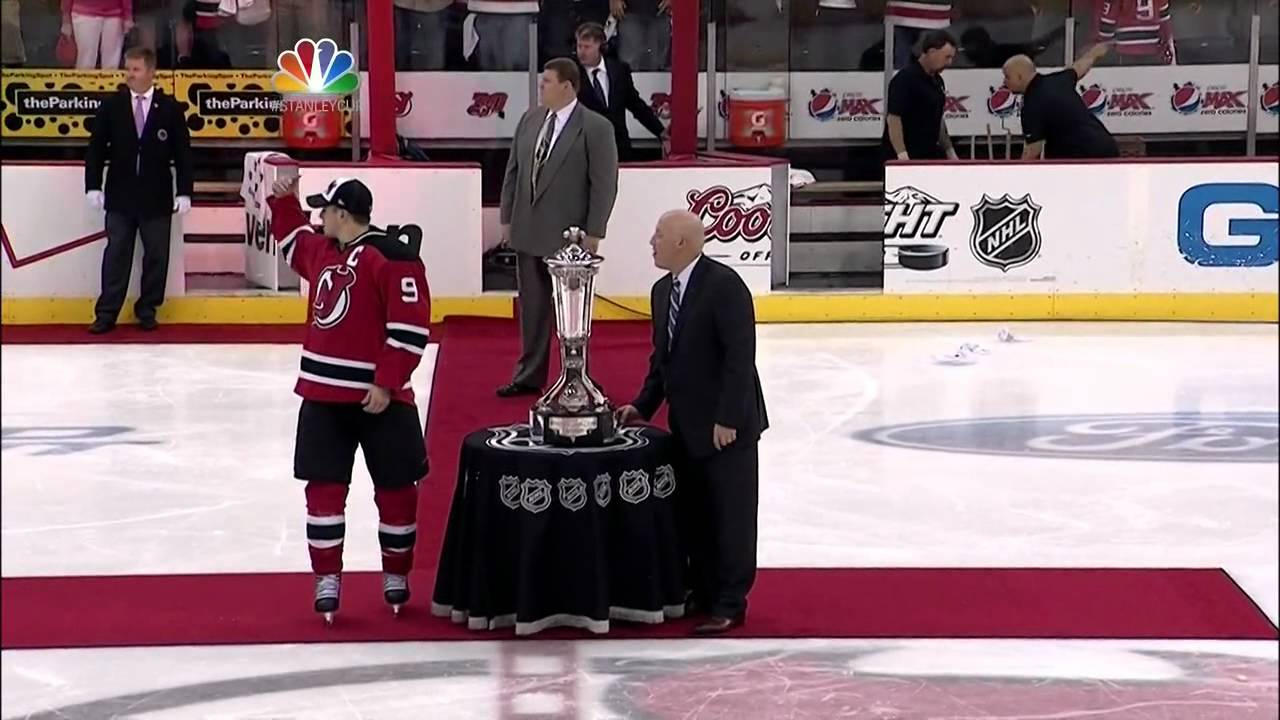 The organization wanted to create a more fan friendly environment and show that the Devils respected their opponent on both sides of the boards and glass.  After a fan vote, “Seven Nation Army” became the new Devils goal song and it was supposed to debut on November 2nd for the Devils battle with the Philadelphia Flyers.  A 1-0 Flyers victory meant the song’s official debut didn’t take place until November 10th, a 5-0 New Jersey victory over the Nashville Predators.

Subtle changes have taken place during the season from different music during warm-ups (not all songs are from the Dainius Zubrus mix anymore, unfortunately), concessions, and a mobile app that allows Devils season ticket holders to upgrade their seats at the game.  A larger change was the sponsorship with the 76ers and partypoker.com that will help the Devils bottom line for many years to follow.  However in the last week the new ownership has really endeared themselves to their loyal fans.  First, they infused a breath of fresh air with a different approach in terms of rewards for returning season ticket holders.  Then, just as the fans finished reading their invoices, came the revelation that left the rest of the NHL in a state of unjust anger.

Less than 24 hours after it became official that Martin Brodeur would finish this season with the only NHL team he has ever suited up for, the invoices and changes in perks came flooding into the accounts of the Devils season ticket holders.  To learn about the benefits for the upcoming season, click here.  This is a shift from previous seasons which featured three distinct categories (Value, Experience, and Access).  The old “Value” category would give renewed season ticket holders a choice between a food/beverage credit, merchandise credit, parking credit, ticket upgrades for a select number of games, dinner at the arena restaurant for a select amount of games, or a credit towards an event at the Prudential Center outside of a Devils game.  The amount of the credit or number of games was based upon the price the season ticket holders paid for their seats.

The old “Access” category featured a list of events season ticket holders could attend based on tenure such as a team BBQ (a meet-and-greet with the players and coaching staff), a team skate, watching the Team Awards Ceremony, and much more.  The last category, “Experience”, had a list of unique events and season ticket holders would rank them 1-10.  They were only entitled to one “Experience” event but examples included a locker room tour, watching warm-ups in the penalty box, a suite for a game, a ride on the zamboni, and more.  Their top rated event was not guaranteed.

For this upcoming season, Devils season ticket holders are guaranteed more player access events, a better chance to win prizes the earlier they renew, and a unique rewards system based upon points that eliminates the ranking system for the “Experience” event under the old system.  Season ticket holders can accumulate points based upon tenure, the price they pay for their seats, and their renewal date.  They can use these points to “buy” addition player events, a trip to a road game, and more prizes.

This is a breath of fresh air for season ticket holders and a change that will be happily welcomed.  They are now guaranteed access to events of their liking once they have a certain amount of points instead of the old ranking system in the “Experience” category that didn’t guarantee a desired reward.  There is still an incentive to renew early and in full but the new owners also eliminated the finance charge on the 3 and 12 month payment plans.  Team success is a combined effort on the ice and in the stands and the new owners are determined to create a home-ice advantage at the Prudential Center similar to the one that helped the Devils win seven home playoff games on their way to the 2012 Stanley Cup Final.

5 Minutes for Fighting: For the Return of the Stolen First-Round Draft Pick

Then the stunner was announced.  During the summer of 2010 the Devils signed Ilya Kovalchuk to a 17-year $102 million contract that was quickly rejected by the NHL.  The Devils eventually were able to sign the star Russian to a 15-year contract with a value of $100 million.  The NHL punished the Devils for salary cap circumvention with the original contract and the Devils were forced to lose their 2011 third round pick in the NHL Entry Draft, a fine of $3 million, and their first round draft pick in one of the upcoming four drafts.  The Devils didn’t surrender their first round pick in 2011, 2012, or 2013 and would have been forced to forfeit their pick in the 2014 NHL Entry Draft.  Holding out was a smart move for Lamoriello and the Devils because the NHL reduced the fine in half and gave the Devils the 30th overall pick in this year’s upcoming draft.  The Devils are not allowed to move or trade the pick.

After Kovalchuk abruptly “retired” and dashed off to the KHL prior to the 2013-14 season the topic of a penalty reduction began to float.  A month later Harris and Blitzer took control of the organization and, as Tom Gulitti reports, they appealed to the NHL to reconsider the penalty.  The penalty was controversial to start but the new ownership was determined to give the Devils the best chance to win in upcoming seasons by working to get the Devils a top-round draft pick they should have never lost in the first place.

Co-owners Harris and Blitzer proved right from the start their commitment to keep the New Jersey Devils a successful team on and off the ice.  They bought an organization that prides itself upon loyalty, excellence, and tradition.  They are doing their part to uphold the high expectation that is expected from this organization.  They have added staff to work with season ticket holders, enhanced the season ticket holder experience to fill the Prudential Center with a loud and passionate fan base, and returned their team’s lost first-round draft pick to the organization.  With secure finances, a solid foundation, and a renewed hope for the team, Harris, Blitzer, O’Neil, and Weber are working hand-in-hand with the Devils most loyal fans to bring Lord Stanley’s Cup back to the Garden State.  They truly are committed to continuing the Devils winning tradition.