Czech it out: MacKinnon is back

In a sports fan’s eyes, there is an unwritten rule that when their team underachieves,  franchise players take the blame. Depending on whether or not the rest of that player’s team places the blame on his shoulders is another story. Fans can speculate, journalists and bloggers can speculate; so let us speculate, shall we? MacKinnon’s performance in game one of the 2015 IIHF Men’s World Hockey Championship was nothing short of what Av’s fans expected from the sophomore sensation before the curtains closed on the Av’s dismal season in April. I won’t argue, in Prague the talent around MacKinnon is undoubtedly of a higher caliber than it is in Denver; however, there is no reason for fans not to have been delivered a similar performance night in and night out this past NHL season. Compared to the speed MacKinnon has shown us this May and that of which he showed us all last year where he won the Calder trophy and took his team to the playoffs, MacKinnon’s performance in the most recent NHL season was unfortunate. Thus let the speculation on the strength of MacKinnon’s mental toughness begin. 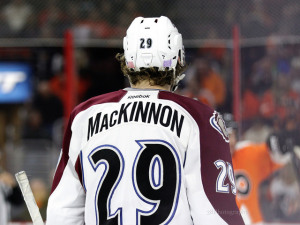 Being a Role Player vs. Being the Leader

In Halifax, where MacKinnon co-lead the Mooseheads to their first ever Memorial Cup title, MacKinnon had incredibly solid play from Canadiens prospect goalie Zach Fucale and future Tampa Bay winger Jonathan Drouin. He had guys beside and behind him that he could count on to be there when he was off his game. If the offense wasn’t performing, Fucale would bail them out. If MacKinnon was having an off night, Drouin would spin circles around the defense and eventually put up enough points with his teammates to take the win. If you watched any Mooseheads games during the tenure of these three trendsetting players, you know exactly what I’m talking about. Enter MacKinnon into the big leagues. Fresh off the Memorial Cup victory and a wonderful QMJHL career now in the books, MacKinnon picked up where he left off and was incredible during his first season as a pro, unanimously earning Rookie of the Year hardware.

So what happened this year? With few roster changes occurring during the off-season, and no significant injuries to blame, the Avs dropped from 4th in goals per game in 2013/2014 to T-22 in 2014/2015. Call it what you want, here is what I’m calling: a severe sophomore slump. At 19 years old, it is crucial MacKinnon puts more weight on his shoulders sooner than later. Right now is the time for MacKinnon to become the leader of an Avalanche squad that has mountains of potential. It is crucial that MacKinnon sees himself not among peers but above the players he skates beside; he must assume the leadership role now. Furthermore, management must recognize that he is a player that deserves captaincy, perhaps a move that would enable MacKinnon to play with the speed and aggressiveness he showed his fans for seasons prior to this one. Nathan MacKinnon must rise up and be Big Nate.