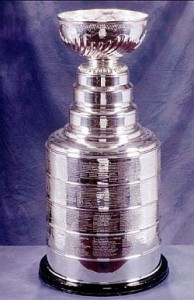 Hockey fans know the Stanley Cup Finals as a tale of two cities. Pure domination when games are played in one [Boston] versus some of the tightest, well played hockey games in the other [Vancouver].

Non-hockey fans who get their news of the series based upon major “sports networks” see this series as the team with the biter, the divers and the dirty player against that other team.

Game 5 reminded the hockey world how awesome and hard fought the Stanley Cup Finals can be.

As the series switched from its two game stay in Boston and Versus back to Vancouver and NBC, viewers were treated to one of the most exciting 1-0 games since game one, minus the biting.

The Boston Bruins peppered Vancouver Canucks goaltender Roberto Luongo with 31 shots on goal, some of which he made saves on which begged the question, had he shown up even remotely on his A-game in Boston, could this series have ended Friday night? On the other side of the ice, Tim Thomas solidified his Conn Smythe resume by stopping 24 of 25 shots, as he pulled out his bag of tricks to keep his team in it. Should Boston not prevail in the Finals, Thomas is certainly a leading candidate for those honors, as he has a stellar 1.20 goals against average despite having been shouldered with three losses during the Finals.

The post-season is known for making heroes out of unlikely players and the Finals are no exception.

A year ago, Raffi Torres was shipped from the Colombus Blue Jackets to the Buffalo Sabres in a move that Buffalo had hoped would be the final cog in a deep playoff run. The change of scenery was almost a complete disaster for Torres, who amassed a mere 7 points between his regular season and playoff stats with the Sabres. His play was so disappointing, it led to Sabres head coach Lindy Ruff to bench the winger for the final 2 playoff games. A year and a team later, Torres has anchored the Canucks’ checking line and added 7 points in the playoffs alone, none bigger than his goal which gave the Canucks the early 1-0 series lead.  The goal came after Ryan Kesler narrowly avoided an offside call, hit Jannik Hansen with a crisp cross ice pass, who then fed Torres for a tip-in on a abbreviated 2-on-1 with just 19 seconds remaining in regulation.

The Game 5 winner which came off the stick of Maxim Lapierre, who before Friday night, had only one goal in the 2011 Playoffs, played for three teams during the 2010-11 regular season. Lapierre started the season with the Montreal Canadiens, playing 38 games and amassing 8 points (5 goals/3 assists) before being traded to the Anaheim Ducks on New Year’s Eve. 21 games and a mere 3 assists later, Lapierre was traded at the Trading Deadline to Vancouver. During the final 19 games of the regular season, Lapierre scored only one goal but had shown excellence in being a checking forward.

Boston’s offensive explosion in Games 3 and 4 were spearheaded by three unlikely sources. First, 21 year, seven-team veteran Mark Recchi put up monstrous numbers during the younger days of his career but has since taken more of a leadership role while still contributing a considerable number of points for a player of his age (43). He amassed 48 points during the regular season and put up 4 points alone in Game 3, his 2nd period goal would prove to be the Game Winner of an 8-1 drubbing of the Canucks. Rookie Brad Marchand added three points, including a pair of goals, in Game 3 and another in Game 4. Michael Ryder had the other three point night in Game 3 and also a goal of his own in Game 4.

The drama, the story-lines, the unlikely heroes, all could be possible had either one of these teams not made the post season, but this match-up has certainly met all the expectations that were built heading into it.

Say Vancouver still beat the San Jose Sharks, but the Tampa Bay Lightning topped the Bruins. Would Alex Burrows have found out what flavor Martin St. Louis or Steven Stamkos put on their gloves in Game 1? Would the suffocating 1-3-1 defensive system which Guy Boucher implemented for the Bolts keep the Sedin twins at bay nearly as well as the Bruins have done thus far? Would the seemingly ageless Dwayne Roloson have continued to silence the skeptics and erase the memories of having a stint on Long Island with the New York Islanders? Sure it had the potential of an offensively explosive series, but could it create the drama and intensity that this series has done so in the first 5 games, maybe but unlikely.

The same could be said/asked had the San Jose Sharks upset the Canucks out West. Could Joe Thornton silence the skeptics and FINALLY deliver a team he leads to a Stanley Cup? Could the Bruins dominate the hot and cold Sharks offense? The list goes on and on with possibilities, but they won’t be answered for now.

All we can do is enjoy the heck out of the 60 minutes (at least) of hockey.

We can all watch intently, hoping for some of the best hockey these two teams can muster. Sure, Vancouver fans will hope for their first ever Stanley Cup clinching victory, Boston fans will cheer their hearts out inside TD Garden, they’ll pack the streets and bars, and try to muster the type of energy the city hasn’t really felt since the Red Sox won the World Series in 2007.

We’ll hope for outstanding hockey. We’ll hope for that playoff passion to boil over with some competitive, clean feistiness, with big hits, great self sacrifice, and some players to recreate their childhood dreams of carrying their team on the biggest stage in all of hockey. 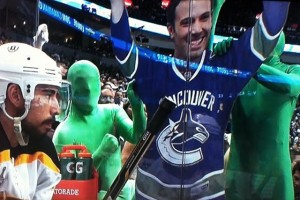 So Hockey Gods, some of us call upon you. Please allow the Bruins and Tim Thomas better the Canucks and Roberto Luongo. Allow the Green Men to escape from their seats at the TD Garden unscathed like the last two games, because if Vancouver wins Game 6, we may never see them in one piece again. Allow for the Boston faithful to file out of the Garden singing the melodies of The Standells’ “Dirty Water” as they know their team will be heading to Vancouver for a Wednesday night, winner-take-all.

A Game 7 is the scenario every kid dreams of growing up. It is the type of situation which hockey fans without a rooting interest are begging for because Wednesday night would be the last game until a long three month layoff resumes when camps open in September. It is the perfect scenario which could draw in non-hockey fans, boosting the ratings on NBC to even higher than they were for the series opener.

Give us drama, give us a hard fought game, and if possible, give us another overtime Stanley Cup winner for millions of kids across the US and Canada something to emulate and dream to become.