The role of a captain in the NHL is an important one. The right captain in place could rally his troops and conquer anything and the wrong one can damage a team. A captain is also one who is willing to sacrifice himself for the greater good of the team and be the vocal, and at times stoic, leader of a locker room.

Wearing a “C” on your sweater is an honor to an NHL team and shouldn’t be taken lightly. A captain is always remembered and the first to hoist the Stanley Cup. It is an unquestionable important role on any team.

I have comprised a list of the top ten best captains in the NHL today. So, without further ado, let’s kick off the list at number ten.

Lecavalier has actually gotten his captaincy stripped from him once before, but has redeemed himself to become a top captain. Lecavalier was originally named captain in 2000, but was stripped before the 2001-02 season began due to poor performance and just not being ready.

In true captain fashion, Lecavalier kept fighting and playing eventually helping the Lightning win a Stanley Cup. He has been a permanent fixture in Tampa Bay since arriving in 1998 and is the most deserving player on Tampa Bay’s roster to become a captain.

Mark Messier, Brian Leetch… Ryan Callahan? It seemed odd at the time, but the Rangers made the right choice in naming Callahan captain.

Then Ranger head coach John Tortorella said that it was an easy decision for him and when you win over Tortorella, you must be doing something right. Callahan is a stoic leader in stark contrast to Tortorella’s style, but the Rangers will soon find a new head coach and Callahan will still be the much needed leader for the Blueshirts.

Sure, Callahan hasn’t gotten the Cup like Messier did before him, but with a team like this, they are in good shape for the future.

Sometimes a leader is someone who will defend his teammates at all costs and that’s where Eric Staal falls in. Staal, a Triple Gold Club member, isn’t afraid to drop the gloves when needed and would hit his own brother if need be.

People may disagree with this choice given his infamous knee-on-knee hit shortly before the Kings won the West last season.

However, Dustin Brown is a very popular player among Kings fans and his own teammates, so, it was a no-brainer why Brown was named captain.

Kings fans voted him as the team’s most popular player this season as he led his team to the Western Conference Final only to be eliminated by the Chicago Blackhawks and their captain who is yet to be named on the list.

Brown’s charity work has been commended by the NHL in the past. Brown was nominated for the Mark Messier Leadership Award and won the NHL Foundation Award in 2011 for his charitable work. Brown donates $50 for every hit he makes in a game, which he donates to a Los Angeles children’s hospital. With Brown being among the league leaders in hits, he makes a healthy donation each year.

Fans love a player with a tough exterior and Brown has got just that. A perfect combination of grit and a heart of gold is what makes Dustin Brown among the best captains in the game today.

Henrik Zetterberg had some quite the sweater to fill when he took on the “C” for the Red Wings. Steve Yzerman and Nicklas Lidstrom were the best leaders the Red Wings had before Zetterberg, but he is doing a fine job since taking on the role.

Zetterberg is among the best two-way players in the NHL today and he makes all the little moves that work. Zetterberg was a big part of the Red Wings playoff run this year coming within one game of beating the eventual Western Conference champion Chicago Blackhawks.

Not only is he a leader on the off, but he is one off the ice as well. Zetterberg was announced as the 2013 NHL Foundation Player Award, given out to the player that applies the core values of hockey to enrich the lives of people in his community. Zetterberg won the award thanks to his foundation, the Zetterberg Foundation, that helps provide clean water for an Ethiopian village.

A great on ice leader and great face for a franchise, Zetterberg is one of the best.

Daniel Alfredsson has been the face of the Ottawa Senators for years now and there’s not doubt why he has been the Senators longtime captain.

Although Alfredsson has never won the Stanley Cup, he is sure to go down as one of the best captains of all-time. Alfredsson has the qualities that makes a captain: talent, leadership, and humanitarian. While Alfredsson numbers won’t exactly wow you anymore, there is no question what he means to this Senators team.

The last two seasons the Senators weren’t expected to do much, but Alfredsson and his Senators made the playoffs both seasons. Having a leader like Alfredsson on a young Ottawa team makes everyone around him better for the future and with Alfredsson’s future uncertain in Ottawa, he certainly instilled his qualities into his teammates.

For as much criticism that Sidney Crosby gets, one thing is true, he is a great captain. Crosby entered the league as a superstar in waiting and became a captain shortly after. Since then, the Penguins have not looked back. In his second season as captain, Crosby avenged his team’s loss in the Final to the Red Wings a year before. Crosby became the youngest captain to win a Stanley Cup.

Crosby skill and perseverance is what makes him the only captain the the Penguins should consider at this time.

Now some of you think that I may have placed Shane Doan a bit too high, but let me explain. The Coyotes have been on, pardon the pun, thin ice for some time now due to poor attendance and no ownership. Through all of that uncertainty and poor results at times, Doan has been unbelievably loyal to the Phoenix Coyotes.

In the times of uncertainty, Shane Doan has persevered and led the Coyotes at one point to three straight playoff appearances. Doan has had to put up with the Wayne Gretzky regime and dwindling attendance and yet he still was a big piece in putting together some talented Coyote squads.

While Doan has never won a Cup, and probably won’t unless he leaves the Coyotes, he is still among the best captains in the game today. I firmly believe that without Doan’s leadership, the Coyotes situation would’ve been resolved long ago and Phoenix would have been without a team long ago.

While his stats won’t exactly jump out at you, it’s his leadership and his ability to help his team ignore the continuous distractions and almost make the Stanley Cup Final last season. Doan should be included on lists for best captains in the NHL.

In a Boston Bruins franchise that has seen some great captains through their illustrious history, current captain Zdeno Chara will go down as one of, if not, the best.

Zdeno Chara came into Boston as the captain and the Bruins are not regretting that decision. Chara has become one of the best defenseman in the league constantly being named in discussion for the Norris Trophy. Chara makes all of the little moves that help win games, such as Chara’s glove save in Game 4 against the Penguins.

Chara’s size and strength is very intimidating to opponents. He isn’t afraid to drop his gloves for his fellow teammates and not many people tend to win against a player of his hulking figure.

Chara’s work off the ice is just as impressive as he is on the ice. Along with Jason Pominville, Chara is a “team captain” of the You Can Play foundation, a foundation built to promote equality in sports. Chara also climbed Mount Kilimanjaro all in the name of the Right to Play foundation, designed to promote sports in impoverished countries around the globe.

Normally Zdeno Chara would be the best captain in the NHL, except for one player.

Toews’ tenure as captain started at a hotel following a fan convention, when Stan Bowman told Toews that he would be the new captain of the Blackhawks, the youngest ever. The ever humble Toews just simply said, “Im honored, and I’ll make us proud”. Little that Toews knew, he would make the Blackhawks proud right from the start.

In Toews’ first season as captain, Chicago made its first trip to the playoffs in six seasons and led the ‘Hawks to the Western Conference Final. Just another season later, Chicago won its first Stanley Cup since 1961. 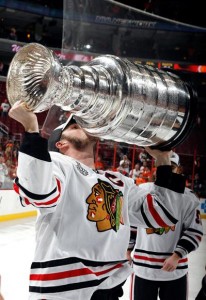 The Blackhawks’ Jonathan Toews personifies what it means to be a captain. Talent, humble, and a born leader. Blackhawks management wanted to make Toews a captain in his rookie year, but opted to wait until that fateful meeting in a hotel.

Toews’ former teammate John Madden used to bring his son into the locker room and told him to be more like Toews if he wanted to succeed as a player.

“I’d bring my 11-year-old into the dressing room. He liked Kaner, because Kaner is like a kid, and he liked me because I’m his dad. But I’d tell him to watch Jonny, how he is, how he handles himself. If you want to be a hockey player, that’s who you should try to be like.”

Toews reminds me of another player who received the “C” at a young age, Steve Yzerman. Both players were great two-way players and won the Selke Trophy for best defensive forward. Both are Stanley Cup winning captains who conduct their manners in the same way and both wear the #19.

Yzerman praised Toews as a player when he said back in 2011,

One of the first times I got to watch him play was in 2007 in the World Championships in Russia. Even though he was still with North Dakota at the time, he played very well there. When we began scouting for the Canadian 2010 Olympic team, we had penciled him in very early and by the time we named the team it was pretty unanimous that he was worthy of being in our top 13.

Talent, success, humility, and respect from his elders, that is the makeup of a perfect captain and Jonathan Toews is the best captain in the NHL today.