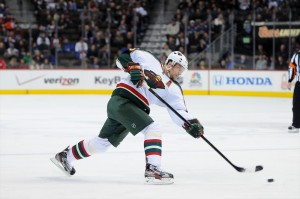 The natives are getting restless. Clearly the Wild are not making a post-season run. Again. And fans here, well, they tend to frown upon that fact.

See, Minnesota nice only lasts as long as the fans like what they see on the scoreboard. They’ll boo their own boys’ right out of the barn to get their point across.

That is why the Minnesota Wild better not just be sitting on the couch, with or without their old man, glued to the TV watching friends, former teammates, and foes fight it out for the Stanley Cup.

Because Minnesota hockey fans are just that; fans of Minnesota hockey. So, if the Wild aren’t performing, failing to meet expectations (pretty sure scoring the fewest goals of any team since the ’04-’05 lockout is proof enough), fans won’t blink an eye about shifting their attention to the 35,324 boys and 8,361 girls who play youth hockey or the 6,200 boys and 3,900 girls playing high school hockey (all stats from 2010-2011 season). With five D1 men’s college hockey teams in the state (the Minnesota Golden Gophers just 7.4 miles down I-94W from the Xcel Energy Center) there is no shortage of hockey games or teams for fans to support.

Take this past March for example, 19,883 fans filled the Wild’s X to watch a semifinal high school hockey game in the Boys’ State Hockey Tournament.

If that many people come out to watch high school hockey, beating out Wild record attendance numbers, the Wild have their work cut out for them. Something Dany Heatley acknowledged in the St. Paul Pioneer Press, “Playing in this rink is something I really enjoy,” he said. “This is a great sports town, and I’ve enjoyed that part of it. I think we all want to have a good summer and give this town something to cheer for next year” (Ben Gosseling/Pioner Press).

Listen carefully and you can hear a collective, “YES!” echoing throughout the state; the sound of impatient hockey fans who are tired of not making the playoffs.

This summer, while the rest of Minnesota is planning trips to the cabin, fishing, and sending their kids to hockey camp, the Wild need to get out their cross-trainers, jump on their bicycles, and dust off their SweetHands.

There will be lots of eyes watching next season (maybe not 19, 883 pairs of eyes, but enough eyes for the Wild to feel boring into the back of their helmets) when the Wild, whoever those players happen to be (prospects called up, players traded from other teams, returning veterans, etc. ), hit the ice.

No matter what the Wild do (or don’t do), off-season efforts will not go unnoticed.

There is no off-season in Minnesota.