Pekka Rinne is the Nashville Predators’ nomination for the Masterton Trophy which “is given to the National Hockey League player who best exemplifies the qualities of perseverance, sportsmanship, and dedication to hockey”. He also is a front-runner for the Vezina trophy, a trophy awarded to the best goalie, and has been for much of the season, a trophy awarded to the best goalie. Does Rinne stand a chance to win either award? He has lead the Predators to one of their best seasons in their history, but that might not be enough. 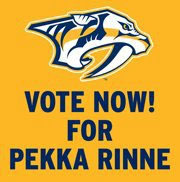 Pekka Rinne for the Masterton Trophy

The Masterton trophy doesn’t get all the attention that some other NHL trophies do, but it ought to. It was created to honor Bill Masterton in 1968. An exceptional center for the Minnesota North Stars, Masterton is the only player in league history to die as a direct result of an injury during a hockey game.

Winning the Masterton Trophy requires exceptional play, a criterion that Rinne certainly has met. But it also requires that the player’s great season comes on the heels of tragedy. Rinne missed more than half of the last season, 51 games, due to hip surgery and related complications including an infection. Plus, to pile on the misery, a knee injury this year sidelined him for eight games. Is this enough to bring more Finnish-flavored tears to the members Professional Hockey Writers’ Association?

Let’s first see how Rinne would stack up against past Masterton winners. In the last five years, winners have come back from missing the playoffs and a whole year to tend to a wife with cancer, a goalie playing in the playoffs with multiple sclerosis, a severe concussion and fractured vertebra, and so on. Pekka Rinne’s hip and knee problems don’t seem to that level of severity.

But maybe the competition this year is just weak enough.

One strong candidate is the Pittsburgh Penguins’ Masterton nominee: defenseman Kris Letang. Letang suffered a stroke due, in part, to a hole in his heart. He missed the majority of the last season, only to become one of the top scoring defensemen in the league this season. Another strong nominee is Montreal Canadiens defenseman Andrei Markov. The tendons in Markov’s leg were sliced by Carey Price (more about him later) in a collision in the first game of the 2009-2010 season. After missing a pile of games over several years, Markov is still performing at a high level at age 36 with a matching number of assists and a +19 rating this season.

I just don’t see Pekka Rinne’s story as more compelling than these, even if his perseverance is as strong as any player in the league.

Pekka Rinne for the Vezina Trophy

The general managers vote for the winner the Vezina trophy, and they aren’t interested in stories of woe or perseverance. The aforementioned Price is first (or tied for first) in the four biggest stat pools for goalies. He is the only goalie clocking in at under two goals against average (per sixty minutes of play) with 1.92, while Rinne sits in third place with 2.10. For save percentage Price is the clear league leader with 0.936 while Rinne comes in fifth just one percentage point back. Rinne and Price are tied for the most wins at 41, but Rinne’s four shutouts to Price’s nine makes for a big deficit to overcome.

One way to double check the strength of a goalie’s numbers is to check the strength of the defensemen right in front of him. Montreal’s Markov (Masterton nominee) and P. K. Subban for the Canadiens form one of the best defensive duos in the league. The relatively low number and quality of shots Price actually faces as a result of the work of his skilled teammates may drive up Price’s statistics. Maybe his nine shutouts make a statement both about his abilities and his defense’s abilities. Interestingly, when the Price and Rinne stared each other down across the ice one week ago, Rinne came out ahead with a 3–2 overtime win, a Predators speciality.

The rest of the article on defensive pairings paints the picture all Predators fans know: that the best defensemen are found in Nashville. Rinne has just as much support in front of the crease as any netminder in the league. Shea Weber and Roman Josi are likely one of the top blue line combo in the league. With that in mind, and Price’s out of this world numbers, I don’t see Rinne hauling in a pile of individual trophies this year. But a tall acrobat like Rinne might be just enough to take the Predators to the only trophy really that matters, Lord Stanley’s Cup.

Peter Denton is a hockey fan. He is a current resident of Nashville and loves the Predators (as a former resident of Michigan he loves the Red Wings too). When he isn’t writing for THW or ALDLAND, he is writing theoretical physics papers.