UNIONDALE, N.Y. — Jake Guentzel scored the decisive goal in the shootout to lift the Pittsburgh Penguins to a 2-1 victory over the New York Islanders on Monday night.

Guentzel also assisted on Derick Brassard’s tying goal in the third period, helping Pittsburgh improve to 3-0-1 in its last four games. Casey DeSmith had 25 saves through regulation and overtime. 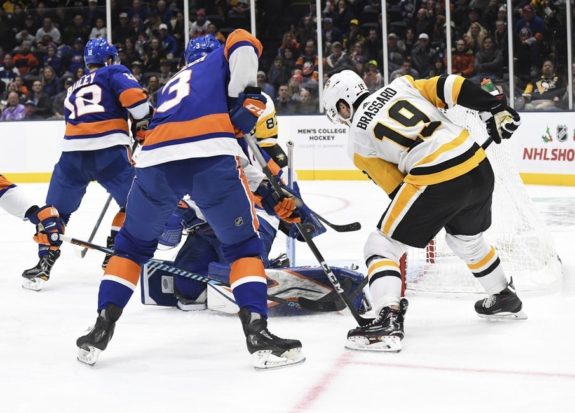 Penguins star Phil Kessel beat Robin Lehner in the first round of the shootout, but Josh Bailey scored on New York’s third attempt to keep the tiebreaker going. Valtteri Filppula was denied by DeSmith before Guentzel closed out the win for Pittsburgh.

DeSmith improved to 6-1-2 in his past nine starts.

Anthony Beauvillier scored in the second period for the Islanders, and Lehner finished with 23 stops.

New York had a power-play chance in overtime when Brassard was penalized for tripping Filppula. But the Islanders came up empty.

Beauvillier put the Islanders ahead with his eighth goal 6:32 into the middle period, converting a pass from Josh Bailey.

Brassard responded 2:13 into the third, knocking the puck past Lehner for his fourth goal of the season.

The teams played a scoreless first period that had plenty of drama. The Islanders failed to score on three power plays, and then killed off a four-minute penalty on captain Anders Lee.

DeSmith made his best save of the period when he denied Brock Nelson in the closing seconds on a break with Lee just out of the penalty box.

The teams split their four meetings this season.