Predators Weekly is my series on how the Nashville Predators performed the previous week. Generally published on Tuesdays, Predators Weekly isn’t simply a recap of games, but rather my takes on said games and the themes that emerged throughout the week. Let me know in the comments below your thoughts on how the team performed this week, your views on the week’s themes and any other ideas or questions you have about the team.

Since the last Predators Weekly, the team embarked on a pivotal three-game California road trip against the Anaheim Ducks, Los Angeles Kings and San Jose Sharks. Win all three and they’d create momentum for a late-season push and playoff run. Lose all three and their chance to win the Central Division would all but disappear and they’d stumble into the postseason. Thankfully, they emerged from the road trip having won two of the three games.

With a 41-27-5 record and 87 points, they remain in second place in the division, three points back of the Winnipeg Jets and five points up on the St. Louis Blues in third place. With nine games remaining, they don’t have the luxury of letting off the gas, but instead need to be focused on putting forth complete efforts in every game. Let’s discuss the three games of the California road trip in the week that was.

The Week That Was

As I mentioned, the Predators won two of their three games over the past week. That is a wonderful result considering the California road trip is notoriously difficult for teams. It was also somewhat of a surprising result based on how they started the road trip with a 3-2 defeat to the Ducks. 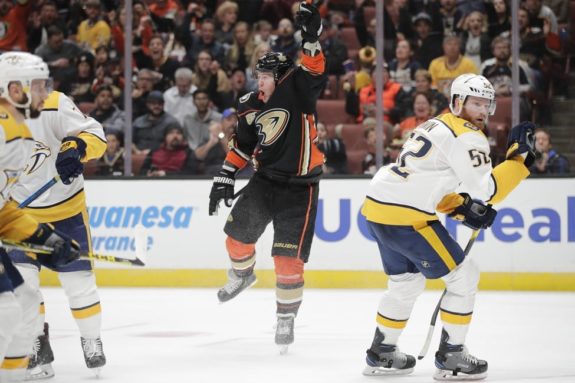 The Predators dropped the ball against the Ducks. (AP Photo/Jae C. Hong)

Although the Predators outshot the Ducks 30-18, Anaheim’s goaltender John Gibson was stellar in net while Nashville’s Pekka Rinne struggled with an .833 save percentage (SV%). The fact that the Predators only lost by one goal was a minor miracle after they were down 2-0 in the first period and 3-0 at the 14-minute mark of the second. It took two third-period power-play goals, both by Filip Forsberg, for the team to make it a close game. Considering how much they’ve struggled on the man advantage this season, it created forward momentum as they faced the Kings two nights later.

The Predators did an excellent job at not going down early against the Kings. A first-period goal by Viktor Arvidsson at the 15-minute mark put them up 1-0. However, the Kings tied it less than three minutes into the second period. There was no further scoring until Craig Smith scored with less than four minutes left in the period and Colton Sissons iced it to put them up 3-1 less than three minutes later.

All-in-all, it was a good game for the Predators. They controlled shots by a 34-26 margin and Rinne stopped all but one shot. In a game in which the Predators were the better team, it was the expected outcome, even if they dropped the ball against Anaheim. This victory set them up for their marquee matchup with the Sharks.

If the Predators were expected to win the first two games of the road trip, the one against the Sharks was a toss-up at-best. The game lived up to its hype with the Predators narrowly controlling shots 30-26. They jumped out to a 1-0 lead just over a minute into the game thanks to a Sissons goal, and the lead remained through the period.

The Sharks’ Timo Meier tied it up early in the second only for the Predators to retake the lead thanks to Arvidsson’s 30th goal of the season. The Sharks once again tied it up late in the second before the Predators scored two goals in the third, one each by Forsberg and Arvidsson, to secure the victory by a 4-2 score. In total, it was a strong performance against one of the league’s better teams.

If you couldn’t tell by my scoring recaps from this week’s games, the Predators’ top line – the JOFA Line – of Ryan Johansen, Forsberg and Arvidsson, was stellar. In their three games, the line combined for six goals and 10 points, including two power-play goals.

The line, which is relied upon to provide a majority of the team’s offense, lived up to expectations this week. However, the trio was actually split up against the Ducks as head coach Peter Laviolette moved Arvidsson down a line with Nick Bonino and Mikael Granlund and replaced him with Wayne Simmonds in an effort to get Simmonds going. The results weren’t good.

The Predators scored no even-strength goals, although Forsberg and Johansen combined for three points. However, at five-on-five, the new top line of Forsberg, Johansen and Simmonds struggled with just a 36.4 shots for percentage (SF%) and a 28.6 scoring chances for percentage (SCF%).  Meanwhile, the Arvidsson/Bonino/Granlund line thrived with both a 66.7 SF% and SCF%. Perhaps this discrepancy was partially due to the matchups each line faced, but either way it was enough for Laviolette to go back to the typical lines versus the Kings. 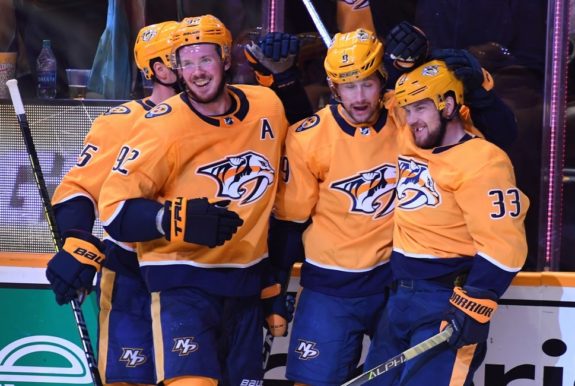 The Predators’ JOFA line of Ryan Johansen (#92), Filip Forsberg (#9) and Viktor Arvidsson (#33) has been on a roll of late. (Christopher Hanewinckel-USA TODAY Sports)

Although the Predators can’t rely exclusively on that line to carry them into and through the playoffs, they do need the line to produce. During the 2017 Playoffs when they went to the Stanley Cup Final, that line went up against opponents’ top lines and won the battle more often than not. Therefore, it only means good things that the line is clicking like it did on the California road trip.

As an added bonus, lines two through four seem to be falling into place, as well. Bonino and Granlund have played well together, Calle Järnkrok/Craig Smith/Sissons have chemistry on the third line and even the fourth line of Brian Boyle, Frédérick Gaudreau and Rocco Grimaldi is producing. If it seems like one player is missing, it’s true. Kyle Turris has been a healthy scratch the last two games after struggling for much of the season. Although he should be centering the team’s second line, the team is playing better with him in the press box.

Simmonds Struggling to Fit In

But Turris isn’t the only Predator who has struggled recently. Simmonds, who the Predators acquired at this season’s trade deadline, hasn’t done much since arriving in Nashville. In eight games, he has one assist, seven penalty minutes and has attempted 12 shots while averaging 14:23 per game. 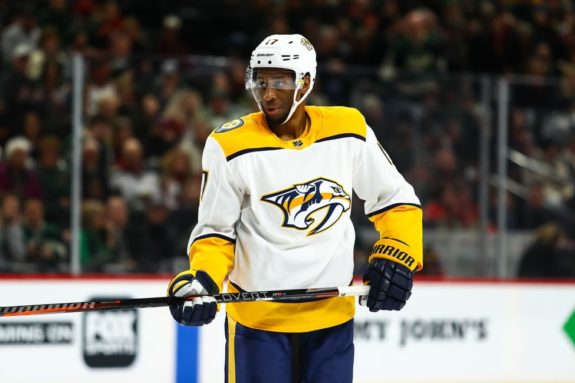 At five-on-five, he has struggled to fit in, playing on the top three lines and has yet to find a consistent home. He has mostly played on the second line but, as I mentioned above, he and Arvidsson switched places on the top two lines against the Ducks in an effort to kick-start Simmonds. A problem I think it occurring is that he doesn’t have the footspeed to keep up with Nashville’s fast-paced, transition-style of offense that relies on creating turnovers at the blue line and quickly getting the puck up ice for odd-man rushes in the offensive zone.

Consider the Predators’ top forwards: Arvidsson, Forsberg, Johansen, Smith, Järnkrok and Granlund are all fast and excellent skaters. The forwards they have who aren’t the fleetest of foot: Boyle, Austin Watson (when not suspended) and Cody McLeod are relegated to fourth-line roles, although in the case of McLeod, it’s also due to a lack of offensive skills.

Perhaps the solution to getting the most out of Simmonds at five-on-five is to use him on the fourth line. It would mean he doesn’t have to generate offense off the rush, which would be beneficial because he’s been good once the team sets up in the offensive zone. He has strong positioning, plays a good two-way game and knows what to do in front of the net. However, the Predators didn’t acquire him for his five-on-five play. 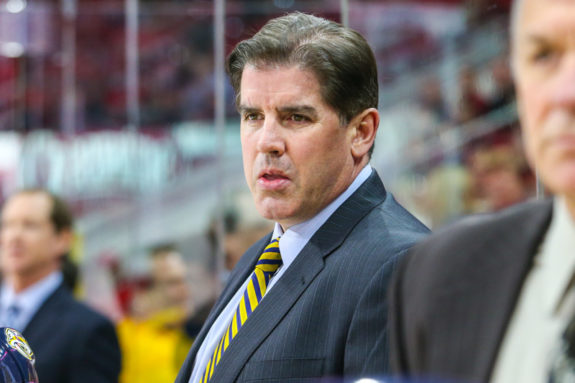 Head coach Peter Laviolette has to figure out a way to get Simmonds going. (Photo Credit: Andy Martin Jr)

News, Top Performers and the Week Ahead

*All stats from Hockey-Reference and Natural Stat Trick