Thursday’s matchup between the Philadelphia Flyers and Vancouver Canucks will be a tale of two squandering teams. Apart from the Flyers’ 10-game winning streak earlier this season, they’ve been a team that’s lost more games than’ve won. The Canucks, on the other hand, have been a team on the ropes the past few seasons, and this one has been no different. They sit sixth in the Pacific Division with 44 points, yet still find themselves tied for the second wild card spot in the Western Conference after a 6-3-1 surge in their past 10 contests. 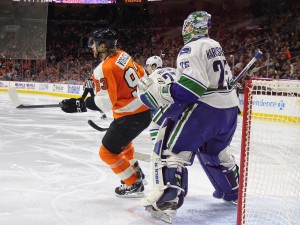 Jake Voracek is one of the few bright spots on offense of late for the Flyers. (Amy Irvin / The Hockey Writers)

Things haven’t gone so well for the Flyers in their past 10 games, as they’ve gone 2-5-3. It’s safe to say that the wheels have gone off the rails as the 10-game winning streak is firmly in the rear-view mirror, as the team’s main struggles have been a dried up offense. Their offensive production was a staple for the Flyers during their winning streak but has seemingly become their Achilles’ heel as they simply cannot find the back of the net. In addition, their power play, which was once as high as second ranked in the NHL, has fallen off drastically as well and has dropped to ninth overall with a 21.9-percent success rate.

Yet despite these struggles offensively, the Flyers are in sole possession of the second wild card spot in the Eastern Conference playoff race. While they hold this place now, it will be pertinent for them to turn things around quickly or they will eventually find themselves on the outside looking in at the playoff picture.

The Flyers have a grand opportunity to begin that turnaround on Thursday, as they host a Canucks team that doesn’t travel well. They are a dismal 5-13-2 on the road and if the Flyers have any hope of turning things around, their schedule gave them a wonderful chance to take advantage of that tonight.

1) Based on the lines at Wednesday’s practice, Dave Hakstol looks to shuffle up his forwards line again, as he desperately tries to spark his team’s offense. Travis Konecny is the latest to get the promotion to play with top-line center Claude Giroux on his right wing, as the experiment with Matt Read at that spot the last three games has come to an end.

2) Despite the Canucks 6-3-1 record over their last 10 games — thanks to a six-game winning streak — they have dropped their last two, both road matchups. The Canucks aren’t doing themselves any favors as they head into Philadelphia where the Flyers often play their best hockey.

3) Thursday’s matchup will be interesting given the current situation for both of these clubs. The Canucks are a middle of the pack type of team, featuring the 25th best offense and the 19th best defense in terms of goals for/against, respectively. Whereas, despite their glaring struggles recently, the Flyers still bring into the game the league’s 10th best offense but the 26th worst defense, respectively. If I were a betting man I’d say this one could turn into a high-scoring affair rather quickly.

4) Along with the shakeup of forward lines, Flyers head coach Dave Hakstol had sophomore star defenseman Shayne Gostisbehere practicing on the “extra” defense pair with Nick Schultz at practice yesterday. If Hakstol sticks to his guns, this will be the second time the Calder Trophy runner-up will find himself as a healthy scratch. However, with Mark Streit not eligible to come off long-term injured reserve until Saturday, it will most likely be Nick Schultz who watches from the press box tonight.