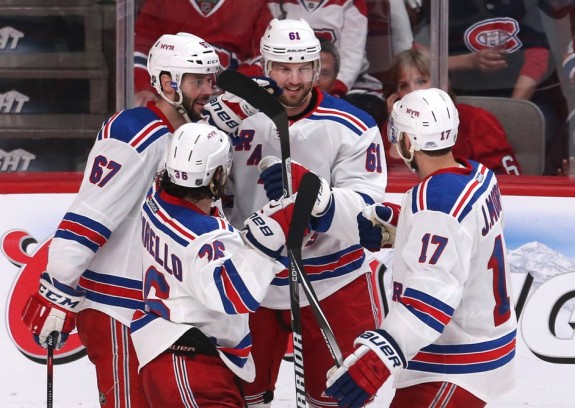 The Bell Centre: the “House of Horrors” for the New York Rangers who had registered just one win in Montreal in the last nine attempts, and for Henrik Lundqvist, who hadn’t won in La Maison des Habs since March 17, 2009.

This was the major story-line for the Rangers coming into the 2014 Eastern Conference Finals, for the best road team in the league, they had to find a way to do it in the one place that they’ve had trouble.

However, after Saturday’s 7-2 drubbing of the Montreal Canadiens, that story-line has officially been put to rest. Any notion that the Rangers couldn’t play in the Bell Centre are now a thing of the past, and something that shouldn’t be an issue from this point forward.

It’s now “Ancient History,” according to forward Brian Boyle, who has been stellar for the Blueshirts so far this postseason.

Ancient History indeed, as the Rangers dominated in every area of the game yesterday, and took the crowd out of it so early that half of Montreal had evacuated before the midway point of the third.

It was quite a win for the Rangers, who took a 1-0 series lead, and are now one win closer to the Stanley Cup Finals.

While they still have a long way to go, there are many positive signs in that victory for the Rangers moving forward.

He had last played at the Bell Centre on January 15, 2012, with his last win there coming three years before that.

It had gotten to the point that former head coach John Tortorella, and current head coach Alain Vigneault resorted to playing their backups (Martin Biron and Cam Talbot respectively) every time they ventured up north to the sea of red, just to spare the King from drowning in his own moat.

Yet last night, he finally took back his castle, and continued to expand his empire by finally taking over Montreal and making it his own.

Lundqvist continued to play at an other-worldly level as the Rangers (believe it or not) won their 4th straight playoff game, making 20 saves on 22 shots and completely taking highly-offensive players such as P.K. Subban and Max Pacioretty out of the equation, something that will be key for New York the rest of the way.

Following the game, Lundqvist addressed the elephant that was so forcefully shoved out of the room and told never to come back.

“Last time we played here, we had a different team and I think I’ve grown as a goalie as well,” he said. “But every time you play a game, you have to show yourself and your teammates that you can play. So yeah, we got a great start here.”

A great start indeed, and Lundqvist who is now 9-6 with .929 save % and 1.99 GAA this postseason, was once again at the forefront of that winning effort that has New York just 3 wins away from heading back to the Stanley Cup Finals for the first time in 20 years.

It may have come at a time in the game where it didn’t necessarily mean anything for the outcome, however, it was a major moment for the Rangers team who hope to make a legitimate run for the Stanley Cup.

In the third period with the Blueshirts up 6-1, and en route to a near perfect Game 1 win, forward Rick Nash came of the half-wall on the powerplay and snapped a shot from the face-off dot that trickled under the arm of Peter Budaj and into the back of the net, for his first of the postseason.

It may not have seemed like much during the game, but by looking at his face and the reactions of his teammates after the goal, it may prove to be a tremendous moment for the Rangers heading into the deep stretch of the playoffs.

Nash, who led the team in goals during the regular season with 26, had not put the puck in the net through the team’s first 14 contests of the postseason, something that became a main story-line, and continued to wear on the star winger.

The goal capped off a brilliant Game 1 performance by the whole team, and helped to pave the way for more success throughout the rest of the series.

Prior to this series, the two biggest story-lines surrounding the Rangers were their lack of success in Montreal, and the lack of production from Rick Nash.

With the goal, the Rangers put both to rest, and can now focus ahead to the opportunity that lies in front of them.

Following the goal, there was a visible sense of relief on the face of Nash, who has actually played well for New York in the postseason, despite the negative media attention.

He has been a key member of the Rangers unbelievable penalty kill unit, has been hard on the forecheck in the last few games, and has even thrown the body around, recording more hits in the first 14 games of the postseason than he had in the entire regular season combined.

He has been a factor for the Rangers in all aspects of the game, except for the goal column – and unfortunately for him, being in the bright lights of New York, where you are expected to be a top end goal scorer, anything less is unacceptable.

Now that the weight of ten pianos has been lifted off of his back, we may finally be able to see Nash break out of the shell, and go on a tear helping the Rangers offensively for the rest of the series.

With the small forwards that he will match-up against on the Habs end, it provides him an advantage with his size and strength to be able to power through the defenses of Montreal. Now that he has regained some confidence by putting the scoring drought behind him, we may see a completely different player the rest of the way.

I expect Nash to be a force for New York the rest of the way, and for Rangers fans, this is something to be very excited about.

If the team can make it to the Eastern Conference Finals without their best goal scorer producing like he can, imagine the team if #61 does finally break out and perform like expected.

It’s a scary thought for opposing things to think about, and just another major positive to take away from the Game 1 win.

It seems as though all things went right for the New York Rangers in Game 1 Saturday, and for a team who has been known to struggle offensively at times, this was a breakout game for them as well.

Seven different players scored for the team in the game, including the big guns such as Martin St. Louis, Brad Richards, Nash, and Derek Stepan.

It was the first time the Rangers have mounted that kind of offensive effort in a playoff game sing 2007, when they defeated the now-defunct Atlanta Thrashers 7-0.

It was a confidence builder for many on the team, as in addition to Nash, Stepan has also struggled to find the back of the net as of late. It was a total team effort, and in a way not too well-known for Rangers fans, was a game won just as much on the offensive side as the defensive side of the puck.

Everyone should expect that the Canadiens will come out much stronger in Game 2, in order to avoid heading to New York in a 2-0 hole, and so it shouldn’t be expected that the Rangers will put up those kinds of numbers once again, however, it was definitely a good thing to see the team look so dominant in an area where they have been so lackluster at times during the season and playoffs.

The Rangers still have a long way to go, and by no means will this series be easy (it’ll only get harder from here), but with the effort in Saturday’s game. the Blueshirts certainly started off on the right foot.

They came together once again as a team and got the job done, and they did it in dominant fashion.

Perhaps more importantly, they too a 1-0 lead in the series, playing in a place that had cursed them so many times before.

The ghosts are gone, and the House of Horrors is no more. All that’s left now for the Rangers is to just keep playing solid hockey and keep their dreams alive.