After Mike Condon stole two points for the Ottawa Senators against the San Jose Sharks in San Jose last week, it was Martin Jones’ turn to return the favor as the series shifted to Ottawa. Despite the Senators taking the late lead and San Jose taking only a slight edge in shot attempts, the Sharks for the second night in a row stole two points from an eastern Canada team.

Sharks winger Joonas Donskoi was a surprise scratch with speculation rife on his injury status or lack there of. But the roster that head coach Peter DeBoer iced overcame tired legs, plenty of penalties, overtime and a four-round shootout to earn another pair of points when even one point looked in doubt.

Hearing Donskoi scratching is at least partially health related – although he hasn’t exactly been tearing it up, either. #SJSharks

After a lengthy pre-game ceremony honoring Chris Neil’s 1000th game in the NHL, the two teams were both sloppy to start the contest, and each got an early powerplay further throwing the rhythm out of whack.

Joe Pavelski got the San Jose Sharks on the board moments after a Senators penalty expired on a behind-the-back pass from Logan Couture to Pavelski who one-timed the puck past Condon. Ottawa answered back just 64 seconds later after the Sharks’ opening goal.

Kyle Turris’ face-off win in the Sharks zone started the play. Then Ryan Dzingel fed Bobby Ryan at the right dot for a one-time blast to tie the game at 1-1. The goal was Ryan’s first tally in 17 games.

Neil drew a cross-checking penalty at 16:26 of the middle frame and the best scoring chance came for the Senators shorthanded, forcing Martin Jones to stand tall to keep the game tied. Ottawa threatened at the 12-minute mark with Brent Burns off for hooking. The Senators had a few good looks, but the San Jose penalty kill would bend and not break.

After a big hit from Micheal Haley, Brent Burns made a power move to the net and fooled Condon who gave up the post, allowing Burns to record his 13th goal of the season.

Haley's effort leads to the goal for the Sharks. Burns powers through the D and gets one past Condon. 2-1 Sharks. OTT might challenge

With 2:32 left in the second, Mark Stone made a fantastic pass from behind the net to find a breaking Kyle Turris who one-timed the puck past Martin’s glove-side to again tie the game.

The march to the penalty box continued as the second period came to a close. Marc-Edouard Vlasic gave Erik Karlsson an extra shot in the corner as play left the San Jose zone. Not wanting liberties (read: a missed spearing call) taken with their captain and best player, Turris came off the bench on a line change and made a beeline for Vlasic. Turris and Vlasic dropped the gloves, but Turris received a fighting major, a 10-minute misconduct, and the instigator penalty, to put the Sharks back on the power play.

The third period moved along with the two sides trading chances until the 7:50 mark when Mike Hoffman cross-checked Logan Couture in the back of the head in front of Jones. This was a major penalty that the referees did not miss and the ensuing five minutes of power play time was successfully killed off by the Senators, despite a handful of good chances on Condon, including a Patrick Marleau goal that was waived off after the play was ruled offside.

Hoffman gets 5 minutes, and a likely meeting with @NHLPlayerSafety

The Senators took the lead for the first time in the game after Joe Thornton was called for a high-sticking infraction at 15:16. Ottawa would again lean on the offensive talents of Karlsson who carried the puck to the left of Jones and fooled Paul Martin deep in the Sharks’ zone. Karlsson hit Dion Phaneuf right between the face-off circles and the former Calgary Flames defender’s wrist shot beat Jones with under four minutes to play.

But the San Jose Sharks have made a habit of late-game madness. Burns’ cross-ice feed to Chris Tierney allowed the Sharks’ center to beat Condon stick side and get the game quickly tied 3-3 with 2:28 left in the game. Both teams traded good chances as the third period came to a close but extra time was needed to decide this game.

The Sharks had the best chances of the overtime period. Mikkel Boedker used his speed to cut to the middle of the ice and get netminder Condon down and out but fired the puck wide. The Senators finished the extra time on the penalty kill after a too-many-men call but the Sharks’ road futility on the power play continued until time expired.

For the second time in as many nights, it came down to the shootout to award the extra point. Only one goal was scored in the shootout, and Kevin Labanc’s goal would be the golden one, giving the Sharks the unlikely victory. 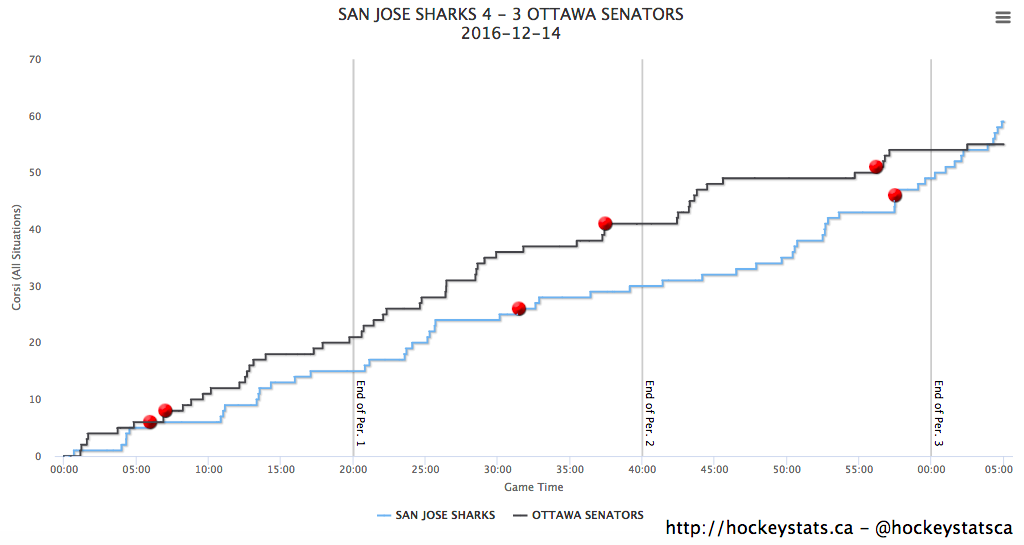