Walking down the tunnel of the BMO Harris Bank Center following the Rockford IceHogs’ 3-1 loss to the Grand Rapids Griffins on Jan. 18, you could feel the anger and the frustration brewing. It was a situation all too familiar to the guys in the locker room; they played just well enough to lose a tight game. The message relayed that night was that things needed to change and they needed to change fast.

“It seems like it’s the same conversation,” interim head coach Derek King said after the loss to the Griffins. “We play good enough, we’re in the hunt and then we make a mistake and it’s in the back of our net. We’ve got three-quarters of the team working hard and the other quarter is not. The shocking thing is that it is guys who have been around and know how to play the game and maybe even prospects looking to make the next jump. It’s not acceptable.”

This was the most emotion King had shown after a loss since taking over for Jeremy Colliton in early November. In his nearly three months as head coach, King has seen a team plagued by inconsistency and offensive struggles.

“If I can bring some new bodies in, we’ll try,” he added. “Maybe shake it up or try something different. Sometimes when there’s not a lot of guys around, you’ve got one extra player, there’s no urgency in your game. If you have a bad game, you have a bad game and there’s nobody else to take your spot. You can see that now and that’s got to change.”

King wasn’t the only one to vent that night, as forward William Pelletier was furious over the result. “We’re frustrated and angry,” the gritty Pelletier said. “We just have to find a way to finish the game and get some wins. Some guys – and I don’t want to blame anybody – we need a 60-minute effort from.”

The following night, King benched forwards Nick Moutrey and Henrik Samuelsson and elected to dress seven defensemen against the Chicago Wolves. The move paid off with a thrilling overtime victory over their rivals.

Epic Comeback Could Spark a Turnaround

On Jan. 25, the IceHogs found themselves down 3-1 to the Manitoba Moose with two minutes to go in the third period. Then Dylan Sikura scored from just inside the blue line and Jordan Schroeder tied the game with just 3.2 seconds left on the clock. They went on to win in the shootout and that sense of angst and frustration coming out of the IceHogs locker room just a week earlier was replaced by relief and jubilation. 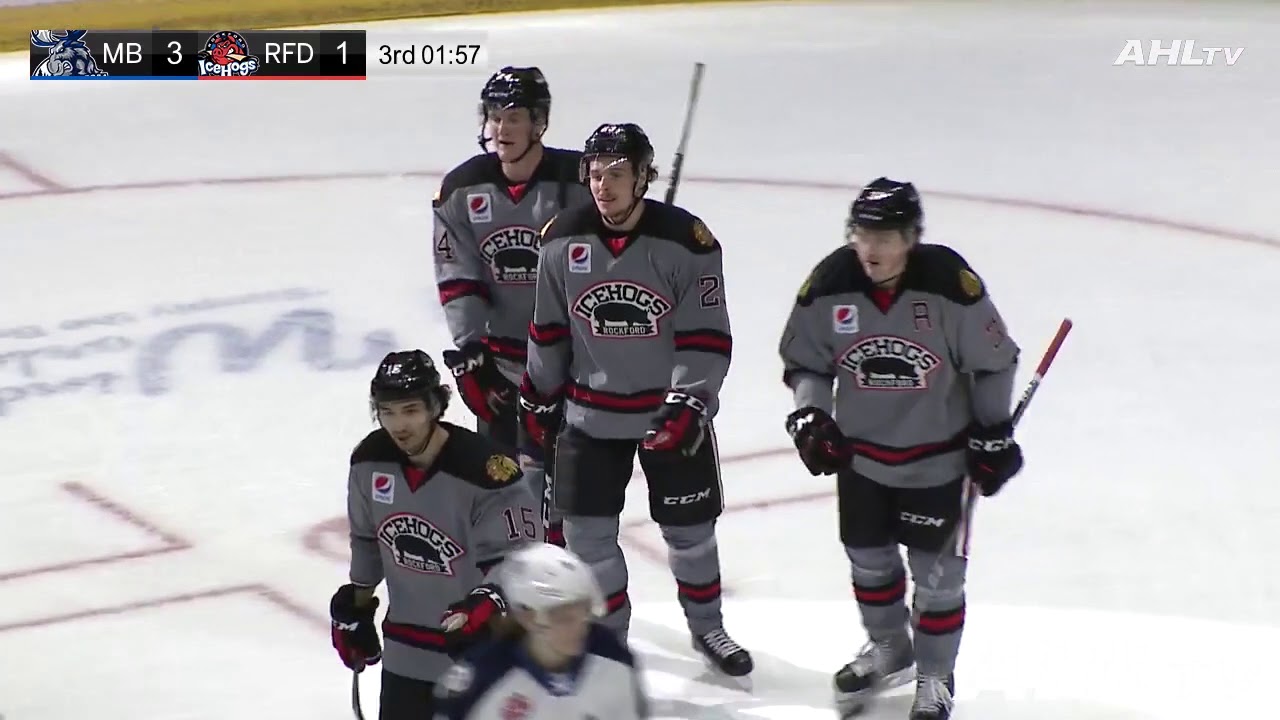 “As a team, you have to play for each other,” said King. “Hopefully they know that they can count on each other to get the job done. Maybe this is the game we turn the tide and start getting some wins so we can get back up in the standings.”

Sikura, who has four points in his last three games and has been one of the few consistent offensive players this season, expressed his sense of relief after the game.

“Maybe the mood around here has been a little down because we haven’t been getting the results we’ve wanted,” he said. “Sometimes it’s hard to preach stuff when we’re not getting results so it was nice to get that win and hopefully, we can use it for momentum.”

The following night, they beat the first-place Iowa Wild in one of their most complete games of the season. King was quick to acknowledge there has been a change within the team that could lead to more success down the road.

“It’s funny. These guys are starting to coach themselves,” revealed King. “I just stand back there now and this is the way it should be as a head coach, I think. I just roll them. You have to match up a line with another line and that’s all you have to think about. These guys are coaching themselves. They are talking about what we need to do and what they are doing wrong and its working. They’re accountable to each other now. I don’t know why it took so long, but it’s like it just snapped or clicked.”

IceHogs Have Been in this Situation Before

Last season, the IceHogs struggled for a good portion of the schedule before turning it on late. They punched their ticket to the Calder Cup Playoffs on the final weekend of the regular season and rode their hot streak all the way to the Western Conference Finals. The turnaround began when the team received an influx of veteran players like Lance Bouma, Adam Clendening, Chris DiDomenico and Cody Franson. This current IceHogs roster could use a similar influx of talent if they want to go on another run.

While players like Sikura, along with guys like Anthony Louis, Jacob Nilsson and Luke Johnson have provided some solid play, there is a lack of veterans on the roster. Terry Broadhurst, Andrew Campbell and Jordan Schroeder have provided the leadership this season, but they could use a couple more players who have experienced the grind of a long season before.

The IceHogs have also had some bad luck in the injury department. Matthew Highmore was lost to a shoulder injury in October and is unlikely to play again this season. His energy and ability to score have been sorely missed. Tyler Sikura has been out with a thumb injury and there is no timetable for his return. He is another player whose effort is never questioned and provides some jam to the lineup.

In the past, the NHL’s trade deadline has meant subtraction from the IceHogs’ roster. When the Chicago Blackhawks were perennial Stanley Cup contenders, prospects were moved in order to help the roster in Chicago.

This season should be different as the Blackhawks are at the bottom of the standings are looking to move veterans for draft picks and prospects. Depending on what deals are made, the IceHogs could get a boost in talent.

They will be getting defenseman Henri Jokiharju, at least for the time being, as he was reassigned to the IceHogs on Thursday. The 2017 first-round pick has played well during his first NHL season but has hit a wall of late. The Blackhawks want him playing more meaningful minutes and they feel he can do that in Rockford. He will be a welcomed addition to a pretty solid crop of defenders.

Can This Team Pull Off Another Late Run?

The IceHogs earned the fourth and final playoff spot last season with 88 points. They currently sit in seventh place in the Central Division with 46 points. They are five points out of the last postseason berth and will need to jump over three teams. They are on-pace for 76 points right now and will have to earn 42 points over their last 30 games to equal last season’s 88 points, which may not be enough this spring.

“It’s good getting those points heading into the break,” Broadhurst said. “We know where everything is at, standings-wise, so we’ve got to take one day at a time. We have to try and get points every game and start climbing the ladder. I think what we are doing now is working.”

The IceHogs will play 17 of their final 30 games at home, including six out of their first seven games out of the All-Star Break.

“Obviously, we’ve had a bit of a tough stretch of late but I think we’ve been doing good things and just have not been rewarded,” Johnson said of the team’s current state. “It’s good to see us stick with it and get rewarded for it. Every point is crucial for us now. We are fighting to move up in the standings and for a playoff spot. It’s like playoff hockey for us now.”

If the IceHogs are to make another magical run to the postseason, then they will need to find some offense. They have scored just 105 goals this season, the fewest in the AHL. Goaltending has not been an issue, as only nine teams have given up fewer goals than the 130 the IceHogs have up to this point of the season. The trio of Colin Delia, Anton Forsberg and Kevin Lankinen have been rock solid all season long.

The games have become more important and the intensity will be increased over the last 30 games. The IceHogs are hoping to build off two big wins to put together another post-All-Star break run. They believe they have the players to do just that and, in due time, we will find out if they are right.