The San Jose Barracuda Week That Was

The San Jose Barracuda skated in a trio of contests this week. All the scores were lopsided and only once in San Jose’s favor. Despite the poor results this week, the Barracuda are still first in the AHL in goals allowed (91) and second in penalty killing proficiency at 86.6%.

The Barracuda finished the week with a 19-11-1-3 record and a winning percentage of .618, sitting in third place in the Pacific Division and fifth in the Western Conference.

The Bakersfield Condors had a hard luck night in San Jose. Nikita Jevpalovs, Adam Helewka and Ryan Carpenter all scored first period goals before Jesse Puljujarvi recorded his first AHL goal with one second remaining in the opening frame.

For much of the game, it seemed San Jose could do no wrong.

Marcus Sorensen would record a pair of goals, and Barclay Goodrow and John McCarthy would score on Condors netminder Nick Ellis. Barracuda goalie Mantas Armalis saved 22 of 23 shots to give the MLK Day crowd at SAP Center a big victory before the Barracuda headed out on a seven-game road trip.

Quote of the Game: “That was a clinic,” said head coach Roy Sommer after the game. “We were hitting on all eight cylinders, and they were sputtering. You have games like that. You don’t like being on the other end of them, but it sure is fun being behind the bench for them.”

The Barracuda kicked off the road trip with a long run down I-5 to face the Gulls. Unfortunately, the Gulls were rude hosts on their Star Wars Night with a sellout crowd.

Jordan Samuels-Thomas and Scott Sabourin scored first-period goals for the Gulls. San Jose found the ice tilted against them most of the night, even with Tim Heed and Barclay Goodrow back in the lineup from a stint with the Sharks.

The Gulls continued to jam the neutral zone in the second period, as the Barracuda got slight more zone time but only Nick Sorensen of the Gulls found the back of the net, beating Troy Grosenick at 14:17 of the middle stanza on the power play with Dan Kelly in the penalty box.

Patrick McNally scored a strange goal that went through the net. As play continued, Alex Gallant took a massive run at Samuels-Thomas and was ejected for boarding. All that happened at 13:32 of the third in the boxscore, as play continued after the goal. Additionally, Gallant received a two-game suspension for the illegal hit.

Kalle Kossila’s first goal in the third period was a goal of the year candidate no matter what league you watch. Kossila was behind the San Jose net with no pressure and executed the famed “Michigan Goal” made famous by Mike Legg.

Kossila drew a penalty while attempting to shoot on the empty net after Barracuda bench boss Roy Sommer pulled Grosenick. Kossila was award a goal for his efforts, recording a pair of nontraditional goals in the Gulls victory.

The Barracuda have had issues with the Reign’s size and experience over the last two years. The Barracuda’s top-ranked penalty kill was carved up for three goals in this game which got out of hand in the third period.

The first period saw the Reign jump to an early 2-0 lead on goals by Sam Herr and Paul LaDue before John McCarthy put back a Ryan McNally point blast past Jack Campbell to cut the Reign’s lead in half. Marcus Sorensen’s deflection of a Jacob Middleton shot from the point tied the game at 8:33 of the middle period.

Newcomer Bryan Moore had two good looks in his first game with San Jose to get the Barracuda goals in the second period. His best chance was a partial breakaway down the left wing that almost squeaked under Campbell, who was unsure where the puck was.

The Reign would rain down goals on San Jose the rest of the way, scoring five goals in the last 28 minutes of the game, including four in the third period. San Jose was outshot 33-26, and Mantas Armalis took the loss.

Ryan Carpenter Up With Sharks 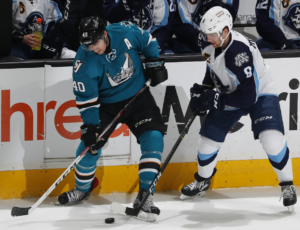 The dependable and steady game of Ryan Carpenter is missed on the Barracuda, but his recent call-up to the San Jose Sharks is turning some heads. “Carpy” recorded a goal and assist in three straight games for the Sharks. The Hockey Writers caught up with him after Sharks practice this past weekend for a quick interview.

The Hockey Writers: You’re drawing back into the lineup tonight. How Is this call-up going with you?

Ryan Carpenter: “It was nice to get into back to back games in, feel like you’re getting into a little bit of a rhythm and getting more comfortable. It was nice to be able to contribute and get a goal. However I can contribute, if it’s scoring, being hard to paly against, drawing penalties or being good on face-offs, try to do the same thing tonight.”

THW: How does your game adjust from the AHL to the NHL level?

He's got number one! Congrats to Ryan Carpenter of the @SanJoseSharks. #NHLFirsts pic.twitter.com/zFZdzcCD1p

RC: “Try to be even more responsible. Try to play the same way, try to play hard but here play simpler. Not necessarily a scoring role here. Would like to contribute that way [by scoring], but maybe play less minutes but be hard to play against each shift.”

THW: Sharks coach Pete DeBoer said the fourth line is something he’s still tinkering with and looking at. Does that motivate you to elevate your play?

RC: “Anytime I get a chance to play I feel like it’s a chance to show you that can contribute and help the team win. Anytime in the line-up that’s kinda how I take it kind of like a mini tryout one day at a time. It’s been nice to get a couple games in. Some of them were unexpected with some guys sick or hurt, but I’m just going to do the best I can.”

The Barracuda road trip continues on Jan. 25 as San Jose travels to face the Stockton Heat. The squad will then pack their bags and head east with stops next week to face the Milwaukee Admirals and Grand Rapids Griffins. The ‘Cuda do not play another home game until Feb. 8 against the San Diego Gulls.