Brayden Schenn will return to his home town of Saskatoon, Saskatchewan to make one final run at the Memorial Cup. 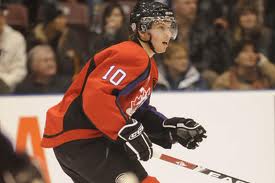 “It gives us a better opportunity to achieve our goal (of a WHL championship)” said Saskatoon Blades General Manager/head coach Lorne Molleken.

The 5th overall draft pick of the 2009 NHL entry draft will add exceptional talent and veteran presence to an already impressive team; the Saskatoon Blades are currently 1st in the Western Hockey League standings with a 31-9-0-1 record. It’s expected that Schenn will centre the Blades first line alongside former World Junior teammate Curtis Hamilton and the Blades top scorer Josh Nicholls.

Ironically the Saskatoon Blades next game is against the Brandon Wheat Kings on Tuesday, January 11th. Brayden Schenn will not take part in the game due to recovering from a shoulder injury that occurred at the 2011 World Juniors in the quarter-final match-up between Canada and Switzerland. It’s reported that Schenn is still 10-14 days away from returning to the ice.