Remember that 11 year old boy from Minnesota who scored the $50,000 shot in a hockey contest, but didn’t get the prize money because his father admitted that his twin brother was supposed to take the shot? Dad, what were you thinking? One of the perks of having identical siblings is being able to pull off moves like that! Nate and Nick Smith could have gotten away with the money, but Mr. Smith thought that teaching his sons a lesson about honesty would be more rewarding…When the insurance company announced they would not give the family the money, I’m sure dad was second guessing the terms and conditions of the honesty policy.

To watch a news clip of the Smith story, click here:

As a triplet, I was fortunate enough to play collegiate basketball and volleyball with both of my sisters. We were never able to pull off such a genius maneuver as Nate and Nick because we were always on the court at the same time. Although, people still ask us whether 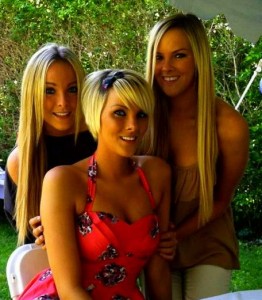 or not we have ever switched boyfriends or gone on dates for each other, and the answers to those questions will remain a mystery.

It’s no mystery, however, why athletic siblings seem to hold an advantage over the competition. Growing up together, they push each other. If you watch any multiples play sports together, a common observation is how well siblings know each other and connect on the court/field/ice. And if siblings play against each other, the competitive fire in one drives the other to be better, stronger, faster.

Although siblings have played in the NHL, only a handful have been multiples…five to be exact. Three of the five sets are from Sweden, one is from Canada, and another from the United States. Let’s take a look at these stud siblings.

Rich and Ron Sutter: Rich and Ron were the first set of twins to play together in the NHL. These Canadian twins started their professional careers together with the Lethbridge Broncos in the Western Hockey League. In 1982, Rich was drafted 10th overall by the Pittsburgh Penguins. Ron, who was drafted earlier than his older brother (technically), was selected 4th overall by the Philadelphia Flyers. From 1983-1986, they landed on the Flyers together. Rich and Ron are actually two of six brothers to play in the NHL- Bryan, Brent, Darryl, and Duane Sutter also played in the league.

Patrik and Peter Sundstrom: The Swedish born twins spent their professional careers playing in the NHL and in Sweden. Patrik was drafted in 1980 by the Vancouver Canucks and Peter was drafted in 1981 by the New York Rangers. Both played part of the 1989-90 season together for the New Jersey Devils. Another hockey family, Patrik’s son, Alexander Sundstrom, is a prospect for the Devils.

Chris and Peter Ferraro: Chris and Peter were only the second set of twins to play together in the NHL. Since they laced up their first pairs of skates they were inseparable and would play together for most of their careers. Chris and Peter caught the attention of the public early, playing together for their prep school and junior hockey teams. At the University of Maine, they won an NCAA Division 1 championship together. In 1994, both wore the red, white, and blue during the 1994 Winter Olympic Games. In the 1992 NHL Entry Draft, The New York Rangers selected Peter in the first round and Chris in the fourth. They played the 1995-96 season with the New York Rangers; in 1997 they played with the Pittsburgh Penguins; in 2001 they played with the Washington Capitals.

To read more about the Ferraro brothers, read the following link.

Daniel and Henrik Sedin: Dan and Hank are unquestionably the most famous twins to play together in the NHL, and they are arguably the most successful as well. These identical Swedish twins have played together throughout their careers. Dan and Hank were drafted second and third by the Vancouver Canucks in 1999. They play on the same line, Hank in center and Dan on left wing. Hank is the team captain and is known more for his playmaking while Dan serves as alternate captain and is known for his scoring ability. They also represented Sweden and took home gold at the 2006 Winter Olympics.

Here’s some of that twin magic between Daniel and Henrik:

Henrik and Joel Lundqvist: In the 2000 NHL Entry Draft, Henrik was selected by the New York Rangers and Joel was selected by the Dallas Stars. Their teams faced off against each other on December 14, 2006; Hank won that battle 5-2. Although the Lundqvist brothers haven’t played together in the NHL, they played together professionally in Sweden. Not only did these brothers win a championship together for the Frolunda Indians in the 2004-05 season, but they also win a medal for the sexiest set of hockey twins, unofficially of course.

Undoubtedly, these five sets of twins have been asked the infamous question, “Who is the better player” throughout their careers. It took my sisters and me 25 years to realize that providing people with the most democratic answer caused the least amount of fighting afterward. “We are all strong at different aspects of the game” seemed to be a boring response, but it definitely prevented the hair pulling, bickering, and silent treatment it used to cause. I wonder if these brothers learned the same lesson. If not, then it should be mandatory that whoever asks that controversial question follow the pair around and watch the strife it most likely causes. At least we would know for sure who the better fighter is.