The Ottawa Senators managed to stave off elimination on Wednesday with a hard-fought 1-0 victory over the Montreal Canadiens. The win kept the cinderella Senators’ remarkable run going but they face an uphill climb: Coming back in a series after being down 0-3 is no easy task, but given the run the Senators went on to make the postseason, if there is a team who can overcome the deficit, it is this team. 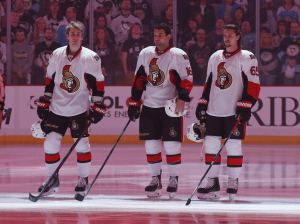 Over the last few months the hockey gods have smiled on the Senators. They’ve been able to count on production from rookies, stumbled across the hottest goaltender in the NHL, and rallied as a team throughout some emotional circumstances with their management. Heading into the playoffs, everything was going in the Senators direction, until they ran into Carey price and quickly found themselves down 0-3.

To battle back in this series the Senators will not only need to win the next three games, but will also need Price to lose four consecutive games; something Price has not done all season.

With their season on the line in a 0-0 hockey game late into the third period, it was not a veteran Sen who stepped up to the plate, but rather a rookie. Mike Hoffman, one of two standout rookies down the stretch, buried the game winning goal late in the third to secure the win and keep his team alive.

While the Senators still have a pulse in their first round series, there is still an underlying problem that needs to be addressed: The team’s veterans have been virtual no-shows through the first four games, and that is a big reason why they found themselves down 3 games.

When Ottawa needed a hero, it was a rookie who stepped up. Being able to count on your rookies is key to longevity in the postseason, but their contributions go for not if your big-time players are not contributing.

Bobby Ryan has yet to show up to the party registering 0 points through 4 games, while Kyle Turris and Milan Michalek have just 1 point each. The only Senators’ player to have scored more than once in the first round is Clarke McArthur who has two goals in four games.

Erik Karlsson, Mark Stone and Patrick Wiercioch are all tied atop the Senators scoring race with 3 points, however, only one of those three has managed to find the back of the net.

While Carey Price is likely a lock for the Vezina and a contender for the Hart, Anderson is one of the best playoff goaltenders around. In his 25 games of earlier playoff experience he boasts a .930 save percentage, which ranks him second behind only Tim Thomas amongst goaltenders with at least 25 games.

Anderson, who has stopped 75 of 77 shots in his two games, will need perfect showings throughout the next three games as he looks to outduel Price. Having Andrew Hammond lay claim to the crease over the last few months, has allowed Anderson enough time to completely heal from his injury and gives the Senators the advantage of a fresh netminder to finish out the series.

Having the rookies support the teams offence has been great to watch, and the goaltending has been stellar; however, if Ryan, Turris and Michalek don’t find the back of the net, the Ottawa Senators improbable run to the playoffs will end soon in an early first round exit. Game five is the perfect time for them to step up, make their appearance at the dance and give the Canadiens something to worry about heading into game six.