Although there was a lot of hype surrounding Crosby’s first NHL game, the outcome wasn’t one that Sid would like to remember.  Crosby picked up his first point in the NHL (an assist on a power play goal by Mark Recchi), but the Penguins would lose the game by a 5-1 score to the Devils.

In the middle of his 3rd NHL season, Crosby recorded a Gordie Howe hat trick. After assisting on Evgeni Malkin’s goal and scoring one of his own in the first period, Crosby completed the hat trick by fighting the Bruins’ Andrew Ference. Crosby would add another assist later in the game, and the Pens beat the Bruins 5-4 in a shootout.

The “new NHL” after the lockout quickly became centered around two rookie superstars, Crosby and Washington’s Alexander Ovechkin. The rivalry between the players and the teams only increased as time progressed. 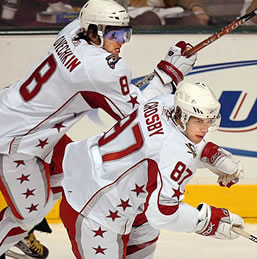 In the first game between these rivals, Crosby got the better of ‘Alexander the Great.’  He scored a goal and added an assist in a 5-4 Penguins win.

This edition of the Penguins/Flyers saga might not be as remembered as much as other games in the rivalry. Even Jordan Staal’s highlight reel goal at the end of the game got more attention in retrospect than Crosby’s performance (check out the link to the goal, you won’t be sorry).

However, Crosby’s performance in this mid-December contest resulted in a career-high five assists and a career-high six points in an 8-4 Penguins win.

Crosby ended his stretch of 25 consecutive games with a point in style. In the Penguins’ 6-3 win over the Thrashers, Sid scored two goals and added two assists. Pittsburgh won 16 of the last 19 games of Crosby’s streak.

With the defending Stanley Cup Champions facing the possibility of losing the first two games at home to the Senators, Crosby did everything he could to even the series at one game apiece. First, Crosby tied the game at one by scoring a goal in the first period.

With the game still tied at one in the third period, Crosby dove across the goal line to keep the puck out and the game tied.  With less than five minutes remaining in regulation, Crosby fought off Ottawa’s Jason Spezza behind the net, and set up the go-ahead goal. The Game Two win would catapult the Pens to a six-game series victory over the Senators.

Crosby started out his tenure as Penguins’ captain with a bang. After being held scoreless in the first game of the season, Crosby went on to record at least one point in the next 19 games. Although the Penguins struggled during the streak, Crosby scored 11 goals and added 19 assists in the 19 games.

It only took Crosby three games for him to record his first goal in the NHL. The goal, scored against the Bruins’ Hannu Toivonen, came on a rebound in front of the net late in the second period. The goal gave the Pens a 6-4 lead, but they wound up losing the game 7-6 in overtime.

It is safe to say that in Crosby’s first seven years in the NHL, no team (and no team’s fans) have disliked Crosby more than the Flyers. In his second career game in Philadelphia, Crosby got the last laugh against the Flyers.

After scoring a goal and adding an assist in the third period, Crosby had a breakaway in the last minute of overtime. Sid the Kid fired a wrist shot past Antero Niittymaki to give the Penguins the win. The goal was Crosby’s first NHL overtime goal, and his first game-winner as well.

The much anticipated playoff matchup between Crosby and Ovechkin finally materialized in their 4th season in the league. In Game Two, the two superstars put on a show, as both Crosby and Ovechkin recorded hat tricks. The Capitals won the game 4-3, and took a 2-0 lead in the series.

After his second NHL season, Crosby become the youngest captain in NHL history. When the Penguins made the announcement, Crosby was only 19 years and 297 days old. The Penguins hadn’t had a captain since midway through the 2005-06 season, when Mario Lemieux retired.

In one of the most anticipated regular season games in recent memory, Crosby’s return to the Penguins lineup after missing over ten months with a concussion was one of the best games in his career. Crosby registered 2 goals and added 2 assists in a 5-0 win over the Islanders.

In only the second shootout of his career, Crosby had a chance to win the shootout against Jose Theodore and his boyhood team, the Montreal Canadiens. With his dad in attendance, Crosby faked a forehand shot on Theodore, and roofed a backhander that knocked the water bottle off the net. Even after seven seasons, Crosby’s shootout goal is one of his most replayed highlights.

After making the playoffs for the first time in his career in 2006-07, Crosby experienced his first taste of playoff success in Game Two against the Senators. With the game tied in the third period, Crosby scored the game winning goal to tie the series at one game apiece. The Penguins would ultimately lose the series to Ottawa in five games.

After losing the first two games in Washington, the Penguins won the next three, only to lose Game Six and set up a deciding Game Seven in Washington. The Penguins won the game in a rout, with Crosby picking up two goals and an assist. Sid effectively sealed the series when he stole the puck from Ovechkin and scored on a breakaway early in the third period.

On the last day of the regular season, Crosby started the game with 49 goals. Two goals and five points later, Crosby reached the elusive 50-goal mark for the first time in his career. Crosby’s 51 goals for the season tied for the league lead with Tampa Bay’s Steven Stamkos, earning him his first Rocket Richard Trophy.

The Penguins steamrolled through the 2008 playoffs, going 12-2 in the first three rounds. In Game Five of the Eastern Conference Finals against the Flyers, Crosby picked up two assists en route to a 6-0 shutout win. The Penguins reached the Finals for the first time since they won the Stanley Cup in the 1991-92 season.

In the second-to-last game of his rookie campaign, Crosby put an exclamation point on the season by recording three assists in a 6-1 win over the Islanders. The three assists gave him 100 points on the season, and he became the youngest player to record 100 points in a single season. Crosby added two points in the last game of the year, and his final stat line in 2005-06 read: 39 goals, 63 assists, and 102 points.

After Crosby’s stellar junior career, the 2005 NHL Draft became known as the “Sidney Crosby Sweepstakes.” Pittsburgh won the draft lottery, and selected Crosby with the first overall pick in the 2005 NHL Draft. Crosby became the third Penguin to be selected first overall, after Mario Lemieux in 1984 and Marc-Andre Fleury in 2003.

Crosby’s streak of 25 consecutive games with at least a point was the best stretch of his career. Not only did the Penguins have an extended winning streak that coincided with Crosby’s point streak, but the numbers Crosby put up during the run were mind-boggling. In the 25 games, Crosby scored 26 goals and added another 24 assists.

Since Crosby has dealt with a number of injuries throughout his career, he has rarely put together a full season that was MVP-caliber from start to finish. However, 2006-07 was one of those years. As a 19-year-old, Crosby scored 36 goals, added 84 assists, and recored 120 points. Among the hardware Crosby received at the NHL Awards were the Art Ross Trophy as the league’s leading scorer, the Lester B. Pearson Award as the players’ choice as MVP, and the Hart Trophy as the MVP as voted by the writers.

In the first ever Winter Classic on New Years Day, 2008, the scene was set for a great day in NHL history. With the snow falling at Ralph Wilson Stadium, the game between the Penguins and Sabres ended up in a shootout. As if it was a Hollywood script, Crosby scored the shootout winner against the Sabres’ Ryan Miller.

In the 2010 Olympics, the Cole Harbour, Nova Scotia native gave all Canadians a moment they will remember for the rest of their lives. After the United States forced the Gold Medal Game to go into overtime, Crosby scored the Golden Goal to give Canada their second Men’s Gold Medal in Hockey in the last three Winter Olympics. The fact that the victory took place in Canada only added to the pressure, and made the win more special.

In Game Seven of the Finals against the Red Wings, Crosby injured his knee early in the game, and only played one shift in the third period. Fortunately, his teammates picked him up and Maxime Talbot’s two goals gave the Penguins the Stanley Cup. At 21 years old, Crosby became the youngest captain at the time to hoist the Cup.

8 thoughts on “Sidney Crosby: 25 of His Greatest Moments”