Columbus hockey is going through a rough patch despite having no actual NHL games played. 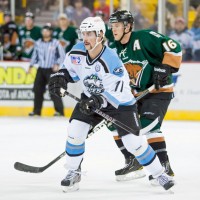 Newly-acquired top-line center Brandon Dubinsky, an Anchorage native, signed on with the Alaska Aces of the ECHL during the lockout.   He was leading the team in scoring – with eight goals and four assists in 12 games – when he suffered a broken hand blocking a shot in a 6-4 victory over the Las Vegas Wranglers.   Thankfully, it was nothing too serious.  He’s expected to make his return to the lineup in about six weeks.

Ryan Murray, the Blue Jackets’ top pick in the 2012 draft, was not so lucky. Selected second overall in last year’s draft, Murray was expected to start the season with the Blue Jackets.  That is, before the lockout put a stop to the NHL season altogether.  Now his season has also come to an end.

Playing with the Everett Silvertips of the Western Hockey League, Murray injured his shoulder in a November 16 game against the Victoria Royals.  The Saskatchewan-born defensemen will need to undergo surgery to repair the injury. Murray’s season comes to a close with two goals and 15 assists for 17 points in 23 games.  In his 191-game WHL career, Murray registered 22 goals and 99 assists for a total of 121 points along with 111 penalty minutes and a +51 plus/minus rating.

“Well, the timing is terrible. It sucks that I’m going to miss the World Juniors and that I’ll never get that opportunity again. It’s really hard to find a positive in this. I’ll keep on the rehabilitation and do the best I can to get ready for next season. But that’s the best I can do right now.” – Murray, to Aaron Portzline of the Columbus Dispatch 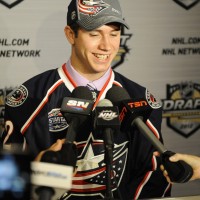 Murray has a bronze medal from the 2012 World Junior Ice Hockey Championships. He was planning on representing Team Canada once again in this year’s tournament in Russia.  He still plans on going, but can only watch from the sidelines.

Columbus also received some bad news from the league late last week, when the NHL announced the cancellation of all games through December 14 as well as the All Star Game. The mid-season showcase was slated to take place at Nationwide Arena on January 26-27. According to  the Columbus Dispatch, losing the game will cost the city an estimated $12 million in revenue and up to $50 million in media exposure.

“We feel badly for NHL fans, and particularly those fans in Columbus,” said NHL deputy commissioner Bill Daly. “We intend to work closely with the Blue Jackets’ organization to return the NHL All-Star events to Columbus and their fans as quickly as possible.”   With the 2014 Olympics in Sochi, Russia, the next opportunity for an All-Star Game will be in 2015, which the Columbus Sports Commission is already targeting.

As bad as all this may seem, there is a silver lining.  A bright one, in fact.

Hosting an All-Star Game after an extended lockout, in the midst of a shortened season, is probably not ideal timing.  Delaying it until 2015 could have a few benefits for Columbus.

First, the NHL will have been back for a while.  Even if the 2012-13 season is lost entirely, the league would presumably have played a season-and-a-half, with the 2014 Olympics in there as well.  Many of the lockout-lost fans will have found their way back to the game by then. 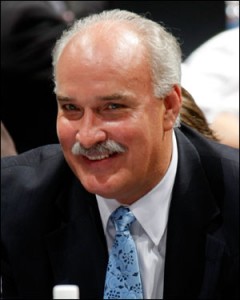 Second, the Blue Jackets will be better.  With only one winning season in their eleven-year existence and steadily-declining attendance, the team can certainly use the time to improve.  Instead of coming off a season where they finished with the worst record in the league, the 2014-15 Blue Jackets can expect to be considerably better. Their young roster will have time to develop and mature together.

Further, the addition of former Blues President John Davidson at the helm will help stabilize their ship; his influence will undoubtedly improve the Blue Jackets.

The potential of a cancelled season also brings one more potentially-significant positive to the organization:

Thanks to their losing record and lack of playoff appearances, the Blue Jackets are in the best spot for the 2013 draft.  If there’s a draft lottery like the one that followed the lost season of 2004-05, the Blue Jackets will have the best chance at nabbing the top pick – likely Nathan MacKinnon of the Halifax Mooseheads.   Aaron Portzline reported that, if the same system from 2004-05 is used, the Blue Jackets would be in a great position to pick first overall, statistically speaking:

All 30 clubs were given a chance to win the No. 1 overall pick, but the lottery was weighted for the clubs that had struggled in recent seasons. Three balls were given to all 30 clubs (90), and one ball was taken away from each time a club made the Stanley Cup playoffs in the previous three seasons and each time a club had earned the No. 1 overall pick in the previous four seasons. No team could have less than one ball.

There would be a total of 50 balls in the hopper and the Blue Jackets would have five of them, two more than anybody else in the league. Five balls? Yes. The Blue Jackets have all three of their own — no playoffs, no No. 1 overall picks — plus the first-round pick of the New York Rangers (Rick Nash trade) and Los Angeles Kings (Jeff Carter trade). That’s a 10 percent shot at winning the No. 1 overall pick, something the Jackets — despite their struggles — have never won.

Things might be looking pretty bleak right now for fans in Columbus, at least for 2012-13.

On the bright side – and, yes, there most certainly is one –  this will be a better team when NHL hockey resumes.  Whenever that may be.