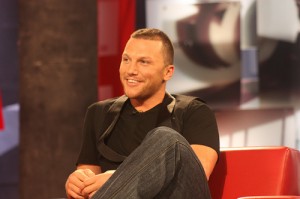 Sean Avery, the league’s super pest. He makes his living by getting under the skin of his opponents. You either love him or hate him and you only love him if he is on your favorite team, and sometimes that is not even the case. The hatred felt by the league and fans towards him is so intense that many people feel he should be banished from the sport entirely. There are some that don’t even know who he is yet hate him anyway because it has become fashionable. But what exactly has Sean Avery done to deserve this? In this article, we will examine why he is hated so much and why the National Hockey League is a joke for allowing and condoning the bias to take place when so many other “unclean” players have been allowed to suit in in this sport.

The first player in league history to receive a suspension of more then twenty games when he was given twenty three games for his stick swinging incident on Donald Brashear. After being roughed up by him earlier in the game, McSorely proceeded to follow Brashear around on the ice before swinging his stick at his head. Brashear then felt to the ice and smacked his head causing him to suffer a concussion. This is surely one of the most classless acts in hockey and probably the third most brutal attack on a player in league history. He was not only suspended but charged and convicted of assault with a deadly weapon and served eighteen months probation. When his sentence was complete he was allowed back in to professional hockey without repercussions, although never suiting up in an NHL game ever again.

The second most brutal act in hockey history occurred when Chris Simon, then of the Islanders swung his stick at the throat of the Rangers’ Ryan Hollweg after being checked. The stick missed and only caught Hollweg in the chin, resulting in a minor injury and some stitches, but what if he had made contact just a couple inches below? Serious injury, possibly even life threatening could have been a result. Simon would then go on to be suspended for a league record twenty five games and is fined before being welcomed back with open arms by the league after serving his sentence. But just a few short months later, Simon would commit yet another brutal act. As the Penguins’ Jaarko Ruutu lay on the ice, Simon viciously stomped on his leg with his razor-sharp skate and then skated over to the bench and sat down like nothing happened. He is suspended even longer then his previous one for this, another league record of thirty games. To show how much of a joke the league is, he is allowed to come back yet again, where he is traded to the Minnesota Wild before finishing his career there shortly after.

In March of 2004 the league was stunned and appalled when Todd Bertuzzi committed the most atrocious act ever to occur on the ice. A game prior  to the incident, Avalanche forward Steve Moore checked Bertuzzi’s teammate Markus Naslund, giving him a concussion. In the post game, Bertuzzi came out and said that there would be “a price on Moore’s head” and just a few days later when the two teams met again, Bertuzzi acted on his threat. Moore hit the ice for a shift late in the game and Bertuzzi chased him around the rink until he got to open ice where he proceeded to roundhouse punch Moore on the side of the head and then jump on his back, slamming his head into the ice, cracking three vertebrae in his neck and ending the career of a young, up and coming player.

Bertuzzi could have been charged with assault and battery but ended up settling a lawsuit with the Moore family. Bertuzzi would go on to be suspended for only twenty games, fined, and suspended from any international play during the lockout; a mere slap on the wrist if you ask me. Then, a year later, instead of being in prison, Bertuzzi is continuing his career in the NHL. He has since played for several teams, most recently this season with the Calgary Flames where he collects a paycheck while Steve Moore sits in a wheelchair, watching the sport he loves on television, rather then playing his childhood dream sport for real. Is Todd Bertuzzi the league’s whipping boy? Is he a target for the referees every time he steps onto the ice? Is he booed unmercifully in every arena that he visits? The answer is no to all three. Still think that Sean Avery is the biggest disgrace in the NHL?

Number sixteen first gained negative notoriety while playing for the Los Angeles Kings. In practice he apparently ticked off head coach Andy Murray so much that he was made to do pushups right there in front of everyone. Avery celebrated by scoring a goal in the next game and doing three pushups in his goal celebration. This would further annoy his team. After wearing out his welcome he would be traded to the New York Rangers where he would stay relatively calm until he shoved Devils’ goalie Martin Brodeur after being shoved by him himself. In the next season’s playoffs, he would cause the league to go into panic mode when he screened the same Brodeur in a way that was so creative that it just had to be illegal. He turned his body towards Brodeur and waved his arms in his face trying to block his vision, but not once ever coming into physical contact with him. The next day the league changed the rules so it wasn’t allowed anymore. Next in the saga, Avery signs with the Dallas Stars where he supposedly pisses off his teammates so much that fans still blame him for not making the playoffs, even though he only played twenty three games. But during that short time Sean Avery did something so horrible that it ended up having him miss exactly half a season. Avery called Dion Phaneuf’s girlfriend his “sloppy seconds”. Those two words were so terrible that he was suspended indefinitely by the Stars, fined, and forced to enroll in an anger management course. He is also ridiculed by analysts and fans around the league. Those two words were so inappropriate that it couldn’t be tolerated, yet the NHL Network and TSN certainly had no trouble playing the video clip over and over again every chance they got. Now Avery plays for the Rangers again, getting a second chance from Glen Sather. He is targeted by the referees nonstop and can’t even finish a check for fear of being called. Does Avery play the game on the edge? Does he run his mouth and piss people off because of it? Does he throw a late hit every once and a while? Yes, but has he ever gone out of his way to hurt someone like the multiple examples given above? The answer to that is no.

Yet how come he is still considered to be the biggest disgrace to the league? Since when does talking too much triumph trying to kill someone? After making the “sloppy seconds” remark, Avery was banished from the league for over forty games and forced to attend anger management classes. That’s pretty ridiculous when you look at other sports and see a player like the Giants’ wide receiver Plaxico Burriss shooting himself in the thigh with an illegal hand gun and he may even be playing football next season. Also look at the other examples above, I will let the videos speak for themselves. I’m not trying to say that Sean Avery is the classiest guy in hockey and should be nominated for the Lady Byng award, because that isn’t the case. But I think it is time for people to take the blinders off and see who really are the biggest disgraces in the National Hockey League.

9 thoughts on “So, You Hate Sean Avery?”