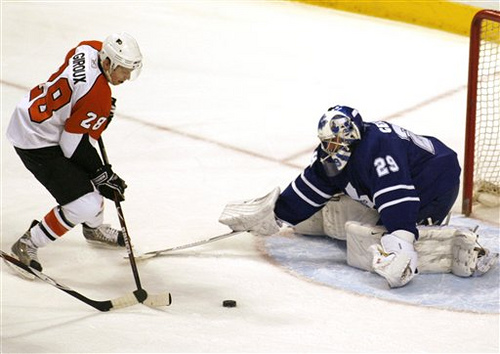 As the Philadelphia Flyersheaded into the 2009 NHL playoffs, most around the league, the fans and the media were focused on the teams four 30 goal scorers andsix 20 goal scorers.  Chances are none were too focused on the 5’11” 172 pound rookie that played only half the season in the NHL, Claude Giroux.

Giroux, a native of Ontario, was drafted in the first round, 22nd overall by the Flyers at the 2006 NHL entry draft.  It was at that draft where the team’s general manager at the time, Bob Clarke, forgot Grioux’s name at the podium to announce the pick .   After his performance in this year’s playoffs, it is certain that NHL general managers will remember this kid’s name.

Although he became a top draft pick, Giroux wasn’t always a highly touted prospect.  Giroux was bypassed in the Ontario Hockey League’s (OHL) draft, and was thus a free agent.    While deciding where he would like to play, the Gatineau Olympiques of the Quebec Major Junior Hockey League, (QMJHL) offered Giroux a try-out prior to the 2005-06 season.   Giroux played very well during training camp and won a spot on the Olympiques roster.

Not wasting any time showing his offensive ability, Giroux seized a key role on the team immediately.  He would score two points in his first game, and three-points in only his third game.   Giroux’s offensive performance would continue throughout the year as he climbed up the list of the league’s scoring leaders, even surpassing the highly touted Angelo Esposito.  By the end of his rookie year in the QMJHL, Giroux would amass 39 goals and 103 points in only 69 games.    As a rookie in the playoffs, Giroux would also add 5 goals and 20 points in 17 games.  Named rookie of the monthtwice during the season, Giroux’s rookie performance resulted in his stock rising for the NHL draft, ultimately resulting in his selection in the first round by the Flyers.  Giroux would also be named to the QMJHL’s All-Rookie Team at the conclusion of the season.

Girouxreturned to the QMJHL for his second season in 2006-07.   He continued his success offensively, finishing the season fourthin the QMJHL with 112 points, improving to 48 goals (20 on the powerplay) in only 63 games.  He also boasted a league-best shooting percentage of 26.1.

Unfortunately, Giroux would get his first disappointment of the season and his junior career to date being one of Team Canada’s final cuts for the World Junior Championships.  His cut was not based on his performance in camp, he played well, it was due mainly to the volume of experienced players returning from the previous year’s gold medal-winning squad including the likes of Steve Downie, Ryan O’Marra, Andrew Cogliano, Sam Gagner and Bryan Little.

His second disappointment would come at the end of the season when the Olympiqueswere eliminated in the first round of the QMJHL playoffs.  Girouxwould get his first taste of pro hockey, appearing in five games with the Philadelphia Phantoms of the American Hockey League (AHL), registering two points (one goal, one assist) and six penalty minutes.

Girouxwould put the disappointment behind him and would arrive at the Flyers training camp for the 2007-08 season.   Unfortuantely for Giroux, the Flyers were coming off their worst season in franchise history and had signed some high priced free agents like Daniel Briere and Scott Hartnell, added an offensive forward in Joffrey Lupul in a trade from Edmonton, andwas not in position to have another young player on the team at the time.  He would return for his third season with Gatineau.   Giroux “only” put up 106 points, including 38 goals, in 55 games.

Making his second attempt, Giroux would earn a spot on Team Canada’s roster for the 2008 World Junior Championships, scoring 2 goals and 6 points in 7 games, helping the team earn its 4th consecutive gold medal.

During the season, Giroux would also be called up, on an emergency basis, to the Flyers for two games who were decimated by injuries at the time.  While he didn’t score any points, he certainly did not look out of place and showed flashes of his amazing play making ability with some great passing.   At the conclusion of the regular season, he was a QMJHL First All-Star Team pick as well as a Canadian Major Junior First All-Star Team selection.

In the 2008 QMJHL playoffs, Giroux absolutely exploded.  He would score 51 points in 19 playoff games, leading his team to the President’s Cup by defeating the Rouyn-Noranda Huskies and placing him next to Mario Lemieux as the only players to score 50 points in less than 20 playoff games in the QMJHL.

Giroux had dominated the QMJHL that May and was now ready for the next step in his hockey career.

Giroux had a quiet training camp with the Flyers for the the 2008-09 season and was assigned to the team’s AHL affiliate Philadelphia Phantoms.  After a slow start, he was named the AHL Rookie of the Month for December for his 8 goals and 14 points in 8 games. He was finally called up to the Flyers after the Christmas roster freeze scoring his first NHL point, an assist on a Jeff Carter goal against the Canucks, on the last day of 2008.    It would take him some time to score his first goal, however.  He suffered a mild concussion during the next game when Cory Perry of the Anaheim Ducks elbowed him in the head, causing him to miss the next five games.  Finally, on January 27, 2009, Giroux scored his first NHL goal against goaltender Tomáš Vokoun and the Florida Panthers in a 3-2 loss.

Giroux had a solid season for a rookie in the NHL finishing with 9 goals and 27 points in 42 regular season games.  It wasn’t the numbers that endeared him to the fans and the organization, however, it was his willingness to battle, his intense hockey training and his poise on the ice.  He didn’t look like a rookie the majority of the time.  He also was asked to play center, taking important faceoffs andshouldering the defensive responsibility with players like Briere, Carcillo and Powe on his wings.

In the playoffs, Giroux completely arrived.  Not only was he the best Flyer in the series, there were times he appeared to be the best player on the ice, even when Crosby and Malkin were out there.  He finished with 2 goals and 5 points in the series, tied with Mike Richards for the team lead.  He was also a +2.   He knows how to use his small size to protect the puck.  He has great defensive instincts and doesn’t shy away from physical play, in fact, he even initiates it.  The play that many of us will remember from this year, however, is the great assist on a Simon Gagne goal in game 3.  Giroux  also scored his first playoff goal in that game and had a fight with Tyler Kennedy.  A Gordie Howe hat trick?

Looking like a star in the making, I think I speak for all Flyers fans, and even hockey fans in general when I say I can’t wait to see what Claude Giroux does next!

7 thoughts on “Claude Giroux – A Star in the Making?”