This is a terrific Guest Post by Chris O’Neil. We hope that Chris will be joining us soon, just not sure who he’ll be covering.

Hockey Training : What NHL Players do in the Off Season

With the conclusion of the 2009 NHL entry draft and the early July ‘free agent frenzy’ comes the inevitable debate over which franchises have set themselves up best for next season and beyond. One thing is for certain when wading through the mire of hockey forums, newspaper columns and TV postmortems: the NHL off season is in full swing. The summer is the part of the hockey season where the General Managers make the headlines more often than the players do as they compete to acquire that missing piece or pieces they feel will put their team ahead of the pack next season. That National Hockey League players are truly a commodity is surely exemplified best in the off season.
Everything from statistics to accolades to leadership abilities are measured to determine the market value of a hockey player. A contract is signed, fans argue over whether the General Manager signed the right player and come October the player begins the attempt to fulfill the promises made during those contract negotiations. 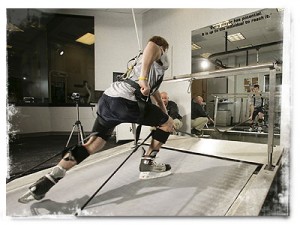 On Hockey Training: One question that is not asked often in the off season is: what are the players doing? While everybody knows that the players are training for the next season and hitting the links, quite often hockey fans do not fully understand what the life of a hockey player is like in the off season. With my off season training experience limited to a CIS off ice program I enlisted the help of Ryan Van Asten to get a feel for what an average summer for the players might look like. Van Asten is a strength and conditioning coach for Hockey Canada and has been getting the Canadian Olympic Women’s hockey team ready for the 2010 Vancouver games and also performed fitness testing for the Calgary Flames for two seasons

A few decades ago NHL training camps were the place where hockey players got into shape for the season after a long relaxing summer. If a player were to do this today he would not make it past the first day of physical testing. If the player were lucky enough to make it past the first day, he would likely fatigue faster and get injured more easily. So what do the players do to prepare for a grueling training camp and an even more grueling eighty two regular season games with the possibility of a dozen or more playoff games? The first group of athletes I asked Ryan about were those players that are on teams that do not make the playoffs or are eliminated in the first round. For those players, their season is over in mid to late April at the latest. I asked Ryan what their off season would look like in the five months from May to September when training camp begins:

“Every player no matter when they finish needs to take some time off. This transition phase can be anywhere from 2-4 weeks. During this phase the athlete will perform static recovery and transition into active recovery. Rehab of injuries, etc. After this transition phase, the athlete will move into a phase of preparation and gradually build on their fitness throughout the summer. The difference is that some players will have a long training period than others who go further in the playoffs. If you go to the cup finals, you need rest and recovery, injury rehab. Once that is finished then they can start training. But they have to start training at the level other athletes started two months prior. They will be behind slightly in terms of off-ice training. That being said they also had an extra couple months of on-ice work. The age of the athlete is also important. Older athletes who have been training longer may not need as much volume of work in the off-season as a rookie.”

When players arrive at camp they are subjected to a battery of tests. With the exception of injured players, Van Asten indicates that every player is expected to be in peak physical condition. Peak physical condition is measured against scores on the same tests from the previous season. Players are expected to match or exceed their previous season’s hockey training fitness level. Since the salary cap era has limited the amount of money teams can spend on players training camp is not only a competition for a roster spot, but can be the difference between making fifty thousand dollars in the AHL or five hundred thousand dollars in the NHL. Most recently off-ice training took centre stage in contract negotiations between Kyle Wellwood and the Vancouver Canucks. When Wellwood was cut loose by the Toronto Maple Leafs at the end of the ‘07-’08 season it was due, in large part, to his off ice work ethic. Upon his arrival in Vancouver, his physical appearance not only barely allowed him to pass his physical but earned him the nickname “Well Fed” as well as countless home made signs and light hearted barbs from teammates, fans and media alike. After subsequently being waived again (with no takers in any of the 29 other markets) Wellwood was called back up and managed to have a streaky season that was ultimately deemed successful. When it came time for contract negotiations and eventual arbitration hearings, off ice conditioning was a main point of contention and heavily influenced contract negotiations. Wellwood eventually agreed to the arbitrators ruling of a one point two million dollar salary; a mere two hundred thousand dollar raise on last year’s qualifying offer. How much he may have earned had his conditioning not been in question, not to mention how much better he may have performed in mid – season would likely have garnered him a bigger raise even if his statistics and performance were identical as the Canucks would have less ammunition in a salary arbitration hearing.

So I asked Van Asten what exactly would a summer look like for a professional hockey player:

“the way I would run a program (and many NHL strength coaches run their programs) would be two hockey training sessions a day, 4 days a week, plus a couple of recovery/regeneration sessions.” An example of one day would be:

Monday PM – Warm-up, pre-hab, Strength/Power training, maintenance work, cool-down” typically players will train twice a day like this on Monday, Tuesday, Thursday and Friday with Wednesday and Saturday being recovery and regeneration days. Although players routines do vary, Van Asten indicates that, “the nuts and bolts of most programs are the same and every athlete does about the same amount of work.”

Even the most ardent hockey fitness enthusiasts aren’t immune to a few summer drinks and barbecues but while that may work for the average person, a professional hockey player has to be very careful with his intake. Failure to monitor diet and alcohol consumption so could adversely affect off ice conditioning. When I asked Ryan about the nutritional demands of a professional hockey player in the off season he provided me with some very specific requirements. “ nutritional demands of an athlete training twice a day are a little bit different than your average person. Nutritional intake is dependent on their current status:

– Each meal must include lean protein

– Each meal should include vegetables

– 25-35% Calories from fat (unsaturated and saturated)

Post-workout nutrition (may include);

I will note that alcohol, high fat foods, processed foods and refined sugar are nowhere on that list and would negatively affect a player’s progress.

One of the summer indulgences that does not make Van Asten’s list is alcohol. The biggest off ice ‘scandal’ in the 2009 off season has been that of Patrick Kane allegedly assaulting a taxi driver while apparently intoxicated. I do not pretend that hockey players, particularly young hockey players, are immune to a few big nights out. But what happens if a young hockey player decides to take too much advantage of a summer ‘off’ and a lot of money in the bank? The biggest detriment to a player’s off ice conditioning would be alcohol and not just because of potential scandals that can question a player’s character and reputation. While it is highly unlikely that a player would be training while drinking in the off season, the day after a big night out would certainly be adversely affected. Every article I researched for this article indicates that a few big nights out will adversely affect a player’s training. A person’s liver will be compromised in its ability to release glucose into the person’s blood stream. With less glucose in the blood stream, a person’s body will produce less energy and the person will have less physical endurance. Alcohol also reduced the ability for a person’s body to convert food into energy, builds up lactic acid and promote dehydration which adversely affect aerobic ability. For a hockey player, these affects of too much alcohol could make building up strength and endurance much more difficult and could potentially negatively affect their fitness testing in training camp if the player is not able to reach strength and conditioning goals set out prior to the off season. To the extent that poor physical testing in training camp affects a player’s well being depends on his contract status but I’m sure no good can come from a poor off-season work ethic for any player.

Hockey is not a sport played in the gym or on the track. In the NHL the best hockey players may not always have the best fitness test scores or off ice work ethic. After all if they can get it done on the ice who cares how high they can jump or how fast they can run? For most NHL players though, especially those ‘on the bubble’, off ice training can be the difference between a roster spot and riding the busses in the minors. Hard work off the ice can resonate well with coaches and management as it indicates a player’s commitment to improving in all areas which is always desirable to a coach when deciding on who he will keep on his roster. To a player on the bubble gaining a roster spot is just the beginning and his off – ice hockey training work ethic can help make the most of the situation. With a roster spot comes the opportunity to improve as a professional and compete for the big salaries that can set a player and his family up nicely for the rest of his life. Good off ice habits will protect the player from injury ensuring that he can make the most of the opportunity and can also help that player ward off fatigue to be more consistent throughout the long season giving him every change to prove that he belongs and increase his market value. In the coming weeks we will see our favorite teams hit the ice, take their fitness tests and compete for roster spots. On the 2009 – 2010 NHL season’s opening night, every rep, every kilometer, every bit of discipline utilized during the summer will play a big role in who is wearing an NHL jersey, who is on the top line and who is in the press box when the puck drops.

5 thoughts on “Hockey Training: What NHL Players do in the Off Season”