The Nashville Predators’ roster is a bit of a unicorn in the NHL. No, it’s not perfect. However, whatever weaknesses exist in the nightly lineup are only so in relation to the rest of the team. The majority of Nashville’s “bottom” forwards would comfortably slot into a middle-six or, in some cases, a top-six role. Look at Pontus Aberg, for example. The young Swede watched many Predators games from the press box in Nashville. In Edmonton, he’s fitting in on their second line, sharing plenty of ice time with Leon Draisaitl. A player who had essentially no place in Nashville’s roster is being viewed as a potential difference maker for his new team.

All this is to say, the Predators are not set up to lose hockey games. However, after a sluggish first period in Rogers Place, the home side boasted a nice 2-0 lead. The Predators looked disorganized offensively and, worse, completely lost defensively. Connor McDavid beat Mattias Ekholm – who is probably sick of looking foolish at the hands of McDavid – to score a somewhat controversial goal. Later, Draisaitl beat Pekka Rinne with a shot he saves probably nine times out of ten. All in all, David Poile’s record-breaking night looked to be in jeopardy after just twenty minutes.

To start the game, Peter Laviolette placed his newest player, Ryan Hartman, on the first line. Alongside Ryan Johansen and Filip Forsberg, I fully expected Hartman to shine. After all, he shares plenty of similarities with Viktor Arvidsson, who typically occupies that spot on the lineup. Early into the contest, however, it was clear that Hartman’s skills should be applied elsewhere. Slowly, he transitioned back into his previous role on the team’s fourth line. This paved the way for Arvidsson to return gallantly alongside Johansen, who has the potential to be truly unstoppable when he “turns it on,” so to speak.

To put a long story short, the line took over. With Johansen’s vision and puck handling, Forsberg’s possession ability, and Arvidsson’s screening and positioning, few NHL lines are as dangerous. They put on a show in the second period, notching the equalizing goal with just nine seconds remaining before intermission. At that point, I’m not sure who was more in disbelief: myself or the Edmonton Oilers. The Predators seem incapable of losing hockey games.

As a whole, here’s how the game’s possession played out:

Although Nashville produced the majority of the shot attempts throughout the game, their real victory is told elsewhere: in the realm of shot quality. It’s one thing to hurl pucks toward an NHL goaltender for sixty minutes. It’s quite another challenge to produce high-quality chances that really challenge opponents. Fortunately for Nashville, they had no problems in this area last night. With an advance apology at the color combination, here’s a look at both teams’ performance, in terms of shot attempts (CF%), scoring chances (SCF%), and high-danger chances for (HDCF%): 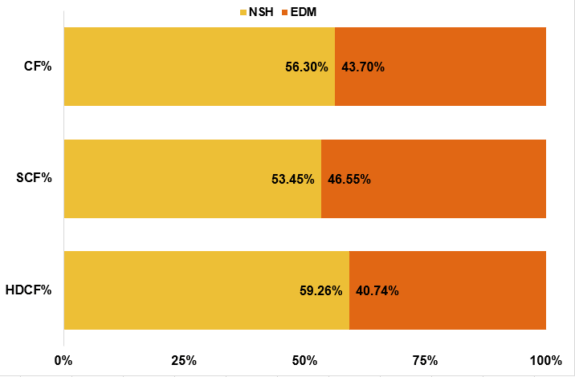 Unequivocally, the Predators dominated puck possession. Especially in the category of high-danger chances – those that really challenge goaltenders – Nashville produced nearly 60% of the total chances at five-on-five.

Those chances Edmonton did produce, at least beyond the second period, were no match for Rinne. He has a knack for looking shaky early on in games, and then standing on his head to keep his team in later on. It’s a strange approach, but it’s hard to argue with six consecutive victories.

The main reason for the recent success of the Predators is the contributions by depth players. Their star defensemen and top-six forwards certainly make headlines, but games are often won on the backs of the more modestly-paid. Nick Bonino’s third line, in particular, has been a story for Nashville as of late. In the past six games, Nick Bonino, Calle Jarnkrok, and Scott Hartnell have combined for twelve points. That’s an incredible level of production from a third forward line.

Last night continued an interesting trend for one Predators player in particular, though. Colton Sissons, even if he’s not tearing up the score sheet, is quietly shutting down opponents alongside Austin Watson, and, more recently, Ryan Hartman. Watson has actually performed at least as well as Sissons lately, but I’d argue the role of a defensive center is more difficult than that of a winger.

Against the Oilers last night, Watson and Sissons produced the first- and second-highest unblocked shot percentage of all players on the ice. It gets better. Who were these players squared up against for the majority of their evening? You guessed it: Connor McDavid.

While toe-to-toe against arguably the most talented hockey player in the world, Colton Sissons produced the second-best Fenwick percentage of any player during the game. That kind of performance earns more than the title of “secret weapon,” and borders on “game-changer.”

With the slightly unconventional 4-2 victory, Predators’ general manager David Poile entered a class of his own. Poile now boasts 1,320 NHL victories, the most for any general manager in league history. His career is certainly worthy of admiration. After serving as the Washington Capitals’ GM for fifteen years, Poile took over the role for Nashville, and has remained throughout the franchise’s entire twenty-year history.

Although he took home some silverware last season, between the Clarence Campbell Bowl and League’s General Manager of the Year award, there is an elephant in the room. The elephant’s name is Stanley, and he’s only been seen in Nashville once. Unfortunately for Predators fans, he was being hoisted by the Pittsburgh Penguins as they celebrated their franchise’s fifth NHL championship.

As with any general manager, David Poile will not be content until the Stanley Cup displays his players’ names.

With his expertly crafted roster, now potentially the league’s best, this year presents the best chance of his career so far. With the team’s sixth consecutive victory in Edmonton last night, the Predators seem poised to do real damage in this year’s postseason. Time will tell, but Nashville is the NHL’s new team to beat.