Brendan Shanahan, the NHL’s head disciplinarian, has become the most controversial figure of the 2012 playoffs. Several puzzling decisions regarding supplementary discipline have left a bad taste in the mouths of hockey fans everywhere. In an attempt to explain his decisions further, Shanahan took to the airwaves Monday. In his interview with WFAN NY, Shanahan discussed the reasons behind the 4 choices he’s had to make so far. The explanations offered paint a bleak picture of the NHL’s future.

That’s because the only real explanation given for the varying amounts of punishment seems to be injury. If a player was injured on the play, repercussions will be more severe than if he wasn’t. The NHL’s failure to understand the glaring problem with that mindset is alarming.

It would seem that intent simply does not matter to the NHL. There have been 3 clear examples of this fact in recent days. 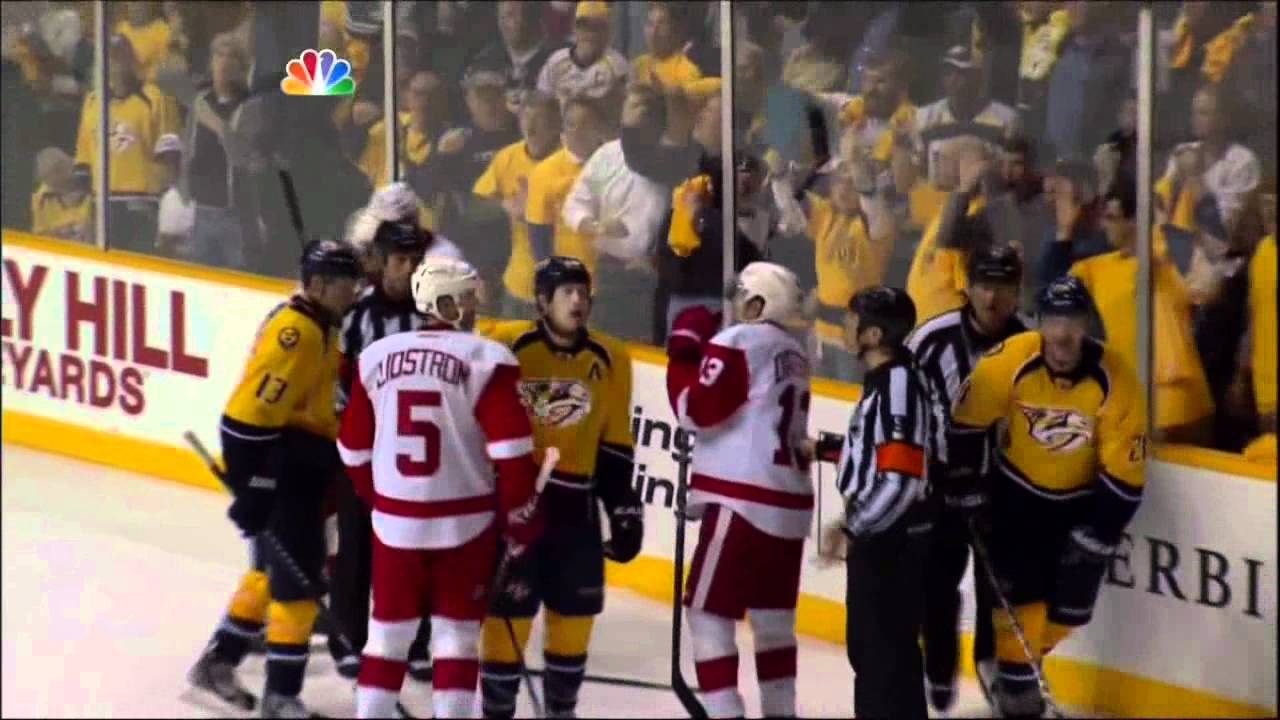 Did Shea Weber intend to injure Henrik Zetterberg when he slammed his head face into the glass at the end of game 1? I’m not sure what other intent there could have been, yet it doesn’t matter because Zetterberg wasn’t injured.

“I was very close to a 1-game suspension on that. When I talked to Detroit [GM Ken Holland], he basically said that the player was fine.”

Weber was assessed a $2,500 fine for the incident. A drop in the bucket for a player making $7.5 million a year. 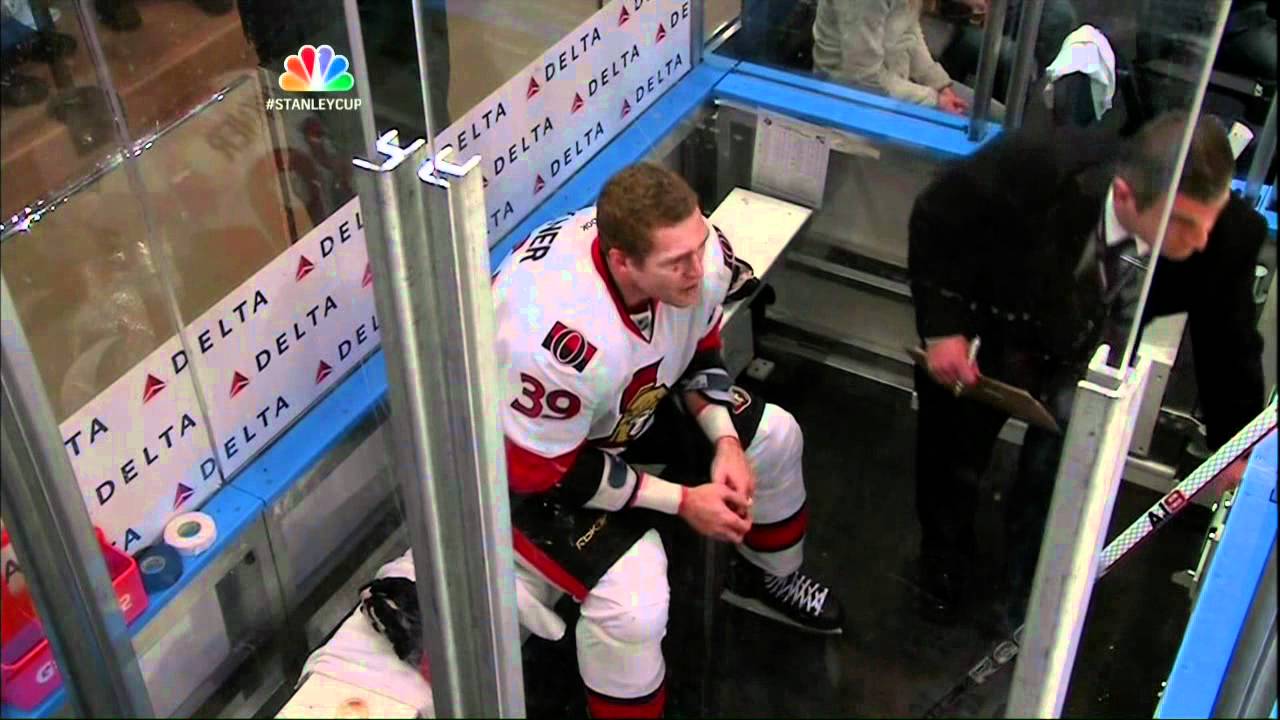 Did Matt Carkner intend to injure Brian Boyle when he skated across the ice, sucker punched him, and then continued to pummel him while he lay defenseless on the ice? That’s the sole reason he was in the lineup, to exact revenge for what the Senators thought were unsportsmanlike plays by Boyle the game before. Clear motivation, crystal clear intent. Carkner received a 1 game suspension.

Did Carl Hagelin intend to injury Daniel Alfredsson when he recklessly elbowed him in the head? It seems pretty obvious that he didn’t. Yet Alfredsson’s (supposed) concussion on the play resulted in a 3 game suspension for Hagelin.

“So Boyle stands up, is fine, doesn’t miss a shift. Whereas unfortunately with an elbow to the head … I do think Carl Hagelin’s a good kid, but he looks right at Daniel Alfredsson, skates at him and elbows him right in the head. Alfredsson has to leave a big game, an important game and doesn’t come back.”

Alfredsson, by the way, passed baseline tests this morning and is a game time decision. Given the stage, I’d say it’s pretty likely he’ll play.

And while I’m not accusing the Ottawa Senators or Daniel Alfredsson of lying in order to worsen punishment for their foes, such actions do have a huge potential for happening when the motivation for them is handed out on a silver platter.

It’s the same problem the NHL faces with calling dives along with penalties. Why wouldn’t a player embellish when his only risk is putting his team 4-on-4, with the possible upside of getting a powerplay? The same type of “Why?” question can be applied here.

Why wouldn’t a team exaggerate an injury  in order to cripple their opponent further? Teams want to win. They can’t be expected to be honest all the time, especially in the heat of the competitive playoffs.

By placing the decision so squarely on whether or not an injury is sustained, the NHL has made a grave misstep. Teams now have the knowledge that they can influence Shanahan’s decision-making process quite simply.

It equates quite nicely to a court of law. If Person X accidentally fires a gun and it kills someone, and Person Y attempts murder and fails, Person X will receive the harsher punishment in the NHL courthouse. There’s a reason that’s not the way it really works; It’s stupid.

Intent should be everything to these decisions. In a fast paced physical game, accidents will happen. Yes, trying to make players more responsible for their bodies is a great initiative, but to punish them more for accidents than intentional attacks is mind-bogglingly unintelligent.

The problem seems to be that intent is more difficult to prove. The NHL would rather not spend the time or make the effort to prove intent, and would much prefer to simply look at medical reports instead. They don’t trust players enough to be honest about intentions (which they shouldn’t), but they trust them enough to be honest about their injuries. They’re taking a shortcut that lacks any kind of logic.

That’s not even taking into consideration the fact that, even without the potential for lies, injuries are unpredictable from person to person. Commit the same act twice and you’re likely to receive 2 different results. Every player is different. Everybody responds differently to different actions. The NHL has now quite clearly said that you’re responsible more for how your opponent responds to your action than you are for the action itself.

If I punch 2 people in the face, one suffers a broken nose and one just a bruise, does it make either of the actions worse than the other? According to the NHL it does, and if that doesn’t seem silly to you, there’s a problem.

Take Duncan Keith’s hit on Daniel Sedin just prior to the start of the playoffs. Keith was suspended for 5 games because Sedin suffered a concussion that continues to keep him out of the lineup. If Sedin had walked away from the exact same hit perfectly fine, would Keith have only gotten 2 or 3 games, and is the NHL honestly okay with that? Because such a situation is entirely possible, and they will run into circumstances where 2 very similar hits result in very different responses from the victim.

The current formula only rewards teams for being dishonest and punishes players for how their opponent responds. It’s ludicrous, and must be scrapped completely. Until it is, this uproar of discontentment wont die down. The entire hockey community is in arms, and until the NHL responds with some common sense, things will only get worse.