So, even though they pulled off a blockbuster trade one year ago, the Lightning and Rangers could be in talks to make another major deadline deal in 2019. While Tampa Bay doesn’t necessarily have to make a deal, they have enough picks and prospects to convince New York to send them just about anyone on their roster.

At the 2018 Trade Deadline, the Tampa Bay Lightning and New York Rangers made a blockbuster deal to send Ryan McDonagh and J.T. Miller to the Lightning. (Brad Penner-USA TODAY Sports)

With this in mind, there are two players that the Lightning’s first-year general manager Julien BriseBois should seriously consider acquiring at the 2019 Trade Deadline: Mats Zuccarello in a major deal and/or Vladislav Namestnikov in a minor one.

Zuccarello Would Shore up the Lightning’s Roster

As the NHL’s top scoring team this season, there are few holes you can poke in the Lightning’s lineup. Even though their roster is solid, it can always use an experienced, offensively talented player like Zuccarello to help fill in the gaps for the postseason. He is the sort of player who could play any role in their forward core, from a top-line scoring winger alongside Steven Stamkos to a third-line energy winger with rookie Anthony Cirelli.

While he may not have the most impressive stats this season, having only posted nine goals and 35 points, this may be due to him playing on a struggling Rangers team than a real decline in his abilities. If he were put into the Lightning’s lineup, he could catch fire like J.T. Miller did after he was acquired at the 2018 Trade Deadline.

Having played in 60 playoff games, Mats Zuccarello has the postseason experience necessary to help the Tampa Bay Lightning win it all. (Danny Wild-USA TODAY Sports)

The real question is, what would it cost the Lightning to bring in Zuccarello? As a pure rental, he would likely garner a high-pick and a B-tier prospect, so maybe something along the lines of a 2020 second-round pick and defenseman Ben Thomas. While that isn’t a small cost for Tampa Bay, it wouldn’t break the bank either, like they did when they brought in Ryan McDonagh and Miller last season.

A Namestnikov Reunion Could Work for Lightning

If the Lightning were looking to only bring in a pure depth forward at the deadline, there really is no player in the world better suited for that role than Namestnikov. As Tampa Bay’s first-round pick in the 2011 Draft, Namestikov honed his professional career with the franchise, having worked with head coach Jon Cooper and multiple current roster players for the better part of six seasons.

When the Lightning traded Namestnikov to the Rangers, it appeared that he was going to shine in a bigger role with the rebuilding franchise. Unfortunately, he was unable to recapture the magic he found in Tampa Bay, quickly sliding down New York’s depth charts. By the 2019 Trade Deadline, he had only managed 19 points while being a healthy scratch multiple times throughout the season. 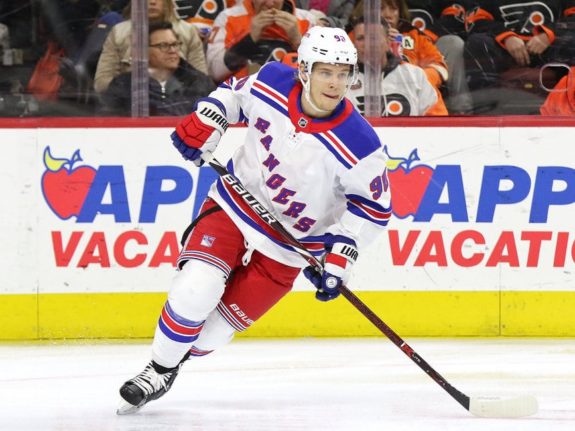 After playing in the Lightning’s system for six seasons, Vladislav Namestnikov was traded to the New York Rangers at the 2018 Trade Deadline. (Amy Irvin / The Hockey Writers)

This means that the Rangers might be looking to part ways with Namestnikov and the year remaining on his $4 million contract. By taking on this contract, the Lightning may be able to sweeten the pot and swap a bad contract of their own, giving them a little bit of cap wiggle room while sending a veteran to the rebuilding franchise.

Ironically, after they sold high on him last seasons, the Lightning could bring Namestnikov back when his value is low, giving them a depth player who could just as easily slot into Cooper’s system today as he did when he was traded to New York last season. This would make the 26-year old center the perfect depth addition since he knows the franchise better than just about anyone in the NHL.

Given where they are at right now, the Lightning really shouldn’t make a big trade at the 2019 Deadline. However, a smaller depth deal to bring in Zuccarello or Namestnikov might be exactly what they need in order to shore up their roster before the postseason.

Related: Lightning Could Use Panarin, but Is It Worth It?

While it may not be as fun as the blockbuster they pulled off one year ago, a trade like this could be just as important for both the Lightning and the Rangers. For Tampa Bay, they could get that last depth player they need to push them over the top for the Stanley Cup. For New York, they could get more picks and prospects to help them in their rebuild.