They’ve only been together for two games, but the Senators’ Kid Line is already a fan favourite. Mark Stone, Curtis Lazar and Mike Hoffman make up a forward trio of speed, skill and of course, youth.

What Have You Done For Me Lately?

The line hadn’t even played one shift together, but once word got out that Stone, Lazar and Hoffman would be on the same line, everybody was more than pleased.

Hoffman-Lazar-Stone will be a popular line. #Sens

And much like before the game, it didn’t take long for the line of youngsters to create some excitement and offence.

Stone’s goal, assisted by Lazar, was during the first shift the line had that game. After that, they couldn’t buy a goal. And not for a lack of effort or chemistry, or chances. Don’t believe me? The following video was an ongoing occurrence that night.

Then it was off to Boston for a Saturday night tilt with the Bruins, and wouldn’t you know it, the Kid Line had an impact again.

This line of Stone, Lazar and Hoffman is looking to be one that we could be seeing a lot of in the future. Their play has certainly helped make a case to keep Lazar in the NHL and also to keep Hoffman and Stone in the lineup.

It’s taken Paul MacLean a while to get his lines sorted the right way, but maybe he’s found something with these three.

More Ice Time for the Kids

Though Stone, Lazar and Hoffman are playing well together, they don’t seem to be getting the ice time they quite deserve. Against both Boston and Chicago, Lazar and Hoffman have been given just over 12 minutes of ice time. Take away the power play minutes Stone gets with the first unit, and he’s also barely making ends meet.

It’s a bit strange that we haven’t seen the Kid Line getting enough action, seeing what MacLean had to say about ice time before the season even started.

What’s obvious is the two goals in two games that they’ve been able to muster. What might go a bit more unnoticed is the fact that Stone, Lazar and Hoffman have been driving up pretty decent possession numbers as well. 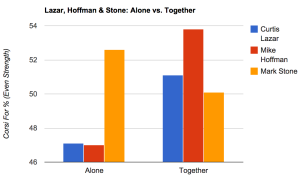 On average, together, the three have a CF% Rel of 8.92 and each one is 50% or above in CF. Overall, they are better with each other than without, seeing as Lazar and Hoffman’s Corsi drops significantly when off the Kid Line.

Being in the bottom six forward group, Stone, Lazar and Hoffman aren’t being put out against the best quality of competition, but their numbers only make an argument for them to see the higher quality players. On a team that has struggled so much in the shot department; getting outshot nine of the first ten games, it baffles me that this line is getting played just above 12 minutes.

If the Kid Line keeps playing this way, it’s going to be a lot harder to justify taking Erik Condra and Colin Greening out of the press box. And MacLean will never scratch Chris Neil or Zack Smith. No matter how much of a liability those two seem to be, coach always sticks with his checking line. It makes it difficult to let “the best players play”, but I don’t see MacLean changing his views on Neil or Smith anytime soon.

This team needs to recognize the way that Stone, Lazar and Hoffman are playing. You can’t ignore the fact that this group has chemistry. Might as well let them play.

The kids are alright.