When Sergei Bobrovsky won the Vezina Trophy after the 2012-13 season, everyone claimed the Flyers had made one of the worst trades in years. They got just 3 draft picks in return, and the goalie the Flyers gave $51M to instead of Bobrovsky (Ilya Bryzgalov), put up a paltry 2.48 GAA and .909 save percentage.

At the tail end of that season, the Blue Jackets dealt Steve Mason to Philadelphia. It was a move that indicated Bobrovsky was the future #1 in Columbus, and the Blue Jackets had run out of patience with Mason. After a Calder Trophy winning rookie season, Mason struggled through 3.5 seasons before losing his job to Bobrovsky.

For Philadelphia, Mason represented a reclamation project that was just another attempt to find their first franchise goaltender since Ron Hextall. What happened since couldn’t have been predicted by anyone.

At the time of each respective trade, it made sense for the franchise that sent the franchise goalie packing considering their current state.

Mason vs. Bobrovsky by the Numbers

The change of scenery did wonders for Steve Mason, as he played lights out hockey in 7 games to finish the 2012-13 season. He impressed Flyers management enough for them to use a compliance buyout on Ilya Bryzgalov, and pay him $23 million dollars to get lost.

Since the trade, Mason has proven to be every bit Bobrovsky’s equal, and arguably, his superior. Here are their complete numbers, Bobrovsky’s entire career in Columbus and Mason’s in Philadelphia. 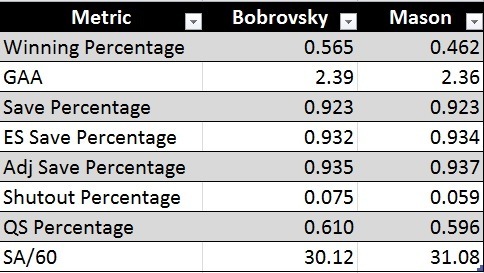 Let’s look at them one-by-one:

Winning Percentage: Bobrovsky has the better number, but winning is very much a team stat that is not indicative of the quality of a goalie. It actually says more about how Mason’s subsequent numbers can be better than Bobrovsky’s, despite playing in front of a theoretically “worse team”.

GAA: A better indicator than winning percentage, but still more of a team stat than anything.

Save Percentage: Far and away, save percentage and its variations are the best indicator of the quality of a goaltender. As Rob Vollman noted in Hockey Abstract, it is the number that the goalie has the most control over, and is the best measure of his quality.

Shutout Percentage: Bobrovsky holds the advantage here, but neither goalie is particularly strong at getting shutouts. Both land outside the top 10 in shutouts during their stints with their current teams.

Quality Start %: A quality start is defined by a goalie achieving at least the league average save percentage in a start. Here, Bobrovsky holds the minor advantage.

SA/60: Per average game, Mason faces about one more shot than Bobrovsky.

What About Team Quality?

While team quality does not have a tremendous impact on save percentage, it can have an impact on the other numbers. Let’s take a look at the regular defensive corps for each team during their stints:

Looking at the respective defensive corps, you can’t say either team had a significantly better squad than the other. Philadelphia’s squad was probably better in 2012-13, but I’d take Columbus by a hair in the next two seasons. Either way, it’s not by a dramatic enough margin to sway an opinion either way.

There were other assets involved besides just a swap of goaltenders, and add important context to the comparison. Here are the total assets that were given to each side:

For Columbus, Michael Leighton never played a game and represented a pure contract dump. They’ll get a solid prospect with the pick this year, but it’s unlikely he will hold the same combined value of Stolarz+Leier.

After posting back-to-back years of .920+ save percentage in the OHL, Stolarz struggled this year in the AHL on a poor Phantoms team. He is still the Flyers’ best goaltending prospect. Leier played for Team Canada at the 2014 WJC, and projects as a speedy two-way third liner.

The Arizona pick was sent to Los Angeles to bring Simon Gagne back to Philadelphia.

Even if you consider Bobrovsky and Mason to be equals (despite Mason’s higher save percentages), the prospects obtained push the trades in Philadelphia’s favor.

It’s an incredibly small sample size (one series each), but Mason has been much better in the playoffs than Bobrovsky. Mason nearly carried the Flyers to an opening round win over the eventual Eastern Conference Champion Rangers, posting a 1.97 GAA and .939 save percentage. Bobrovsky, on the other hand, had a 3.17 GAA and .908 save percentage in an opening round loss to Pittsburgh.

I don't understand anyone that doesn't have Steve Mason in Top 5 for Vezina voting. Since Nov. 1: league-best .949 SV% at even-strength.

Take into account on-ice performance, other assets obtained, and contract status, and it becomes clear that the Flyers won the trades in aggregate.