Erik Gudbranson (Click on name for up- to- date stats) 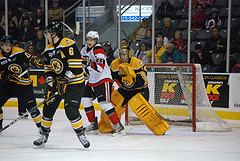 Gudbranson might be raw at this point, but he’s the prototypical big, physical, skilled defenseman every GM and scout covets. He had a good sophomore year, but was limited somewhat as he battled a knee injury as well as a lengthy bout with mononucleosis.

While he has tremendous upside, the team that selects him in June will likely have to be patient. Should everything go as expected and planned for the young blueliner, however, that team will be rewarded with an intelligent defenseman with great character who possesses superior leadership ability.

* “No fewer than two scouts told TSN they now rate the Kingston Frontenacs’ hard-rock defenceman ahead of Fowler. And he wasn’t able to play in the CHL Prospects Game because of an enlarged spleen as a result of a bout of mononucleosis.” – Bob McKenzie (TSN)

* “Huge defender. Communicates on the ice well, supports his partner well, good shot, moves the puck with authority – crisp and hard passes. Has a long reach and uses it.” (THN Future Watch issue 2010)

* ” The more we at North American Central Scouting watch this kid, the more we are convinced he has the potential to become a franchise defenseman who can quarterback a power play. Although there are some concerns about his propensity to get hurt and the fact he still has a lot to learn about the defensive side of the game, his toughness, offensive sense and hockey IQ make him an attractive prospect” – Mark Seidel (THN)

* “Gudbranson to me is a guaranteed long-term NHLer. In my opinion, Gudbranson is another Chris Pronger-type, what he brings that (Pronger) really didn’t do much of, though, is he’ll fight. He is some kind of tough. Chris Pronger is mean and will hit you; Gudbranson will hit you and fight you. Pronger is three inches taller than Gudbranson, so maybe Dion Phaneuf would be an even better comparison.”
– E.J. McGuire, Director of Central Scouting

In 41 games for Kingston, Gudbranson notched 2 goals and 21 assists for 23 points.  He finished with a +11 rating and 68 penalty minutes in a season that was shortened due to a knee injury and a  bout of mononucleosis.

– Ken Reid talks to Erik Gudbranson about the gruelling combine tests and being watched by scouts. (TSN)

– He tied for 6th in Wingspan measurement.

Gudbranson: In The Mold Of Chris Pronger (Photo: Neat1325@/flickr)

* Plays hard, tough with an edge and a mean streak.

*Good puck mobility and shot from the point.

* Coached by Doug Gilmour and this shines through in his game.

* Exhibits willingness to do what it takes to win.

*It has been said that he perhaps has the most untapped potential in the draft.

* Coughed up the puck too often in this year’s OHL playoffs.