Please “Click Here” for “Notes Up Front” and the “Legend” for various topics covered below as covered for the NHL 2009 Draft rankings. There are some modifications and additions in the profiles, so stay tuned for a live updated article dedicated to the NHL 2010 Entry Draft.

Jeffrey Skinner (Click on name for up- to- date stats)

After a very impressive 50 goal campaign as a 17 year old in the OHL, Skinner absolutely exploded in the playoffs and took his game to an even higher level scoring 20 goals in 20 games and added 13 assists.

He is one of the top snipers in the draft, possessing one of the best sets of hands bar none.

Why then is there such a wide range of opinion on where Skinner will go in the upcoming draft?

Read on playing special attention to strengths and flaws sections below.

* Not a scout, but Rangers Coach Spott stated: “I’ve had the good fortune of coaching a lot of the kids in this draft, and I believe Jeff is the best natural scorer in this draft, and that includes Hall and Seguin. Jeff doesn’t have the speed of Tyler and Taylor, but he’s a threat offensively every time he’s on the ice. He is hands down the purest goal scorer.”

* “Agile skater with very good outside speed and puck control at full speed. Has strong and accurate wrist shot and is a two-way hard working player.”

Edwards, though, said there were a few things Skinner needed to clean up in his game, but otherwise believes he’s a solid NHL prospect.

“I think he’ll have to work on his defensive side a little more,” he said. “Obviously his skating and his first step he needs to continue to work on, speed, and all that.” 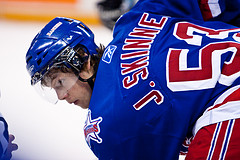