The Los Angeles Kings’ incredible game-tying goal in the dying seconds of Saturday’s playoff game against the Ducks was the stuff of pure Hollywood.

With twelve seconds left and the extra attacker on the ice, Mike Richards fired a slap shot from the point that was blocked by a sliding Nick Bonino. The puck deflected to the boards, where Richards alertly scooped it up, beating Ryan Getzlaf in the process. He shimmied past Getzlaf, cut toward the net and snapped a hard-angle shot toward Jonas Hiller. The puck glanced off defenseman Bryan Allen’s stick, off Hiller’s knee pad and up into the air. With less than eight seconds left, Marian Gaborik chopped at it like Paul Bunyan felling a tree and knocked it into the net, tying the game at 2-2.

It’s one of the most indelible moments of a postseason already filled to the brim with drama, and it’s a must-see:

Los Angeles won the game at 12:07 of the first overtime on a beautiful tip-drill play from Anze Kopitar to Marian Gaborik, putting the visiting Kings up 1-0 in the series.

During the past three seasons, the Kings have been relentless in the postseason, winning 30 of 46 games. They’ve won a Cup (2012) and advanced to the Western Conference Finals (2013). This year, they made history by becoming just the fourth team to come back from an 0-3 deficit to win a series, and now have home ice advantage in their series versus the Ducks. How is it that this team, which hasn’t come close to winning their division in forever, finds extra gears in the playoffs every single year?

Simple. The Kings were built for the playoffs.

The Los Angeles Kings have a stud goaltender

With apologies to Carey Price and Tuukka Rask, who are both backstopping other playoff teams, is there another goalie out there who’s proven to bring his ‘A’ game when it really counts more than the Los Angeles Kings’ Jonathan Quick? Going into last night’s game, he had a 33-24 career playoff record, with a G.A.A. of 2.15 and a save percentage of .927. Throw out the first two games of the San Jose series and the remainder of his body of work borders on the amazing.

This tweet sums up Kings’ fans feelings about their star netminder:

Any doubt #jonathanquick is the best goalie in the world? He's in a zone @nhl @LAKings

I’m going to break with my colleague Sheng Peng here, who wrote this piece about how Quick isn’t elite. Sure, he makes a solid case using regular season stats and of course, it was written after Quick was torched twice by the Sharks. However, he’s forgetting just how dominating Quick was during the 2012 playoffs. He’s also not considering the fact that aside from the two San Jose games, his entire body of playoff work borders on the amazing.

Quick steps up at the biggest moments, and that’s what makes him one of the league’s best goaltenders.

For most of their history, Los Angeles was known far more for offense than defense. Guys like Marcel Dionne, Wayne Gretzky, Jimmy Carson and Ziggy Palffy lit the lamp with aplomb, but the goals’ against averages were, well, at times pretty damned rank.

No longer. The systems installed by former head coach Terry Murry and current coach Darryl Sutter have to be considered defense-first, and although they have led to some frustratingly conservative play offensively, the approach works almost perfectly in the postseason.

The defense is the league’s best 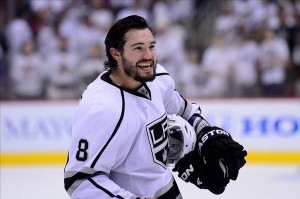 Drew Doughty is a key piece of the puzzle for Los Angeles. (Matt Kartozian-US PRESSWIRE)

It’s been said that good NHL teams are built from the net out. “Out” starts with the defense, and in the Kings’ case, they’ve got arguably the league’s best. Statistically, there’s little to argue (at least in the collective), as Los Angeles allowed the fewest goals in the league (2.05 per game) this year. Last year, they were seventh, and the year before that, second. It isn’t a coincidence — in combination with great goaltending, Drew Doughty, Willie Mitchell, Slava Voynov, Alec Martinez, Jake Muzzin, Matt Greene, and Robyn Regehr can shut down any offense.

The forwards are big, strong and play a two-way game

Los Angeles isn’t the fastest team in the league, a fact San Jose exploited during the first two games of their series. However, the Kings adjusted, and eventually wore down the Sharks with their hitting, play around the net, and of course the resurgence of Jonathan Quick. The Sharks couldn’t land a counter-punch, lost the momentum, and ultimately the series.

The coaching is top drawer

Darryl Sutter is clearly not comfortable behind the microphone, and he often twists his face oddly when behind the bench. Big deal He may not travel the lecture circuit after he retires, but he could someday win the Jack Adams as the league’s best coach. The adjustments the team made after game two in San Jose completely turned the series around. After that game, it felt as if the ice were tilted in favor of Los Angeles the entire remainder of the series.

Let’s not forget the rest of the staff. John Stevens, Davis Payne and Bill Ranford deserve plenty of credit as well.

Why the Ducks may end up being a l’Orange

Anaheim went 4-0-1 against Los Angeles during the regular season, outscoring the Kings 13-8 in the process. Although their defense was a solid #9 this year, it’s their offense that stands out the most, ranking first in the NHL at 3.21 goals/game.

Big deal. The Los Angeles Kings eat good offenses for breakfast. San Jose’s was ranked sixth, and yet after game two, scored just eleven goals in the last five games. Also, the Ducks can’t compete with the Kings physically, and they don’t win faceoffs nearly as well as Los Angeles. Those factors won the San Jose series for Los Angeles, and with a little luck, will play roles in a Los Angeles series win this time as well.

Game two is Monday night. Once again, it’s going to be intense. As Walter Cronkite once said, “The perils of duck hunting are great — especially for the duck.”