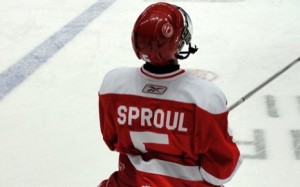 A year ago he was playing in Midget AAA with the OJHL’s Vaughan Vipers, but this slick skating defenseman has quickly become one of the more exciting OHL blue liners to pay money for. It wasn’t too long ago that he was a mere 6’0, and wondering where life was gonna take him. No more. Exploding as a top offensive rearguard in the latter half of the OHL Season, Sproul put himself on the map, and into the minds of scouts everywhere.

Hard to imagine such a short season putting him on the map, but it has. Various sources indicate a top 90 selection come June 24th and 25th. Whatever the case, his raw mix of tools, coupled with his high production from January on, should have teams eagerly awaiting his arrival in the NHL over the next few years.

Top Prospects Game: Did not attend.

“Sproul is raw, yes- but whatever issues he may have with his defense and overall game, the fact remains that this kid scored most of his 14 goals after November. The right-shooting Mississauga native was originally going to go the NCAA route, but switched gears for the OHL, which we hear was the better move for him. Ultimately, he’s going to get drafted higher than most think because guys who are as big, can skate and shoot like Sproul don’t grow on trees. Boom or bust- probably. But homerun potential will be too tempting for him to remain on the board for long. This kid is going to be an off-the-board selection and we liked enough of what we saw of him in the U-18s to say it will happen in the second round.”
– (Kirk Luedeke – BruinsDraftWatch2011)