Originally published in July of 2016 by Cody Reiff, we still believe the point system and the ‘loser point’ need to be addressed by the league.

It may have been the best change the NHL has made since the lockout, but there’s still work left to be done.

It may have been the best change the NHL has made since the lockout, but there’s still work left to be done.

There were two primary goals with this rule change – to bring another layer of excitement to fans, and to limit the amount of games ending in a shootout. The NHL’s theory was taking an extra player off the ice for each team would lead to more goals, which in turn would draw more fan interest than the previous 4-on-4 format. The new overtime was able to accomplish both of these feats with ease, but it missed a glaring issue that needs to be addressed.

Because an extra point is being rewarded in the overtime period for the loser, known as the loser point, teams are incentivized in certain situations to allow games to go to overtime to maximize their payoff. Research has been conducted to show this, as highlighted in Michael Lopez’s paper, “Tilted Ice: How certain NHL teams are manipulating the league’s point system.” What does this mean? More games are ending in overtime, which has caused more games to end in shootouts. This leads back to why the NHL initially changed the overtime format to 3-on-3.

Nobody Wanted so Many Shootouts

NHL executives and fans have voiced concerns over teams making the playoffs in part because they did well in shootouts. After the announcement of the new overtime format, Nashville GM David Polie said, “I’m excited about it. We felt unanimous that we would like more games ending in overtime versus the shootout.” The worry has been teams placing a large amount of emphasis on shootouts, which are often considered a skills competition, instead of a team aspect of the game. For this reason the NHL implemented the 3-on-3, but it doesn’t entirely solve their problem – stopping games from going to overtime in the first place.

Of the games that have required overtime since 2006, 57% have ended in a shootout, and 43% ended in 4-on-4 play. In 2015-16 with the new 3-on-3 format those numbers flipped almost identically with 61% of overtime games ending in 3-on-3 and 39% ending in a shootout. Now instead of teams placing emphasis on the shootout, they should be on the 3-on-3 instead. Does that solve the NHL’s problem? 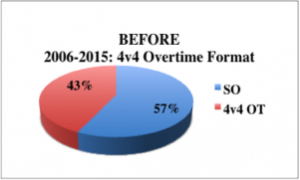 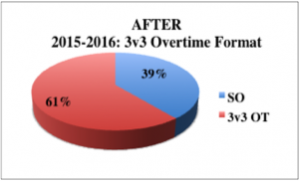 An argument could be made in favor of 3-on-3 play being more team involved than a shootout, but one could also argue it’s still gimmicky. Steve Rosenbloom of the Chicago Tribune went as far to write an article titled “NHL’s three-on-three OT is a joke”. In the article, Rosenbloom said, “If you appreciate a team built to win hockey games as they are played almost 100 percent of the time, then no, this is not what you signed up for.”

If NHL executives, players, and fans are concerned teams are making the playoffs because they won a lot of shootouts, it’s difficult to justify any different for winning a lot of games in 3-on-3 play. There is a simple solution to this problem for the league: making regulation wins valued more than overtime.

The KHL is the foremost competitive professional hockey league in the world to the NHL, and plays under a similar format and rules. Regarding overtime, the league plays a 4-on-4 five minute period followed by a shootout, similar to the NHL prior to the 2015-16 season. The notable difference between the two leagues is their point structure; the KHL has had the 3-2-1 structure proposed above since its inception in 2008.

Since the beginning of the 2014-15 season there have been a total of 2,520 regular season KHL games, of which only 288 (11.43%) required overtime. This number is significantly less than the NHL, which has had about 24% of its games go to overtime over the past decade. 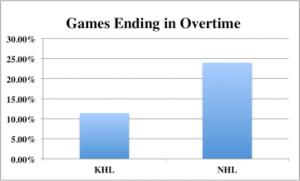 If the NHL were to implement a 3-2-1 point system, how would it look? The table to the right shows how many teams would have been affected since 2006. On average, 13 teams per season would have moved at least one spot 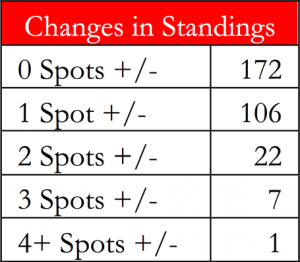 either up or down in the standings. The most noteworthy case would be the 2005-06 Edmonton Oilers, who finished their season with a record of 41-28-13 and 95 points. The Oilers played more overtime games than any other team in the league by three games with a total of 26 (31% of their games), and finished as the 8th seed. Under the new format, however, Edmonton would’ve missed the playoffs entirely as the 10th seed. Of course, that same Oilers team would go on to win the Western Conference and lose in Game 7 of the Stanley Cup Finals to the Carolina Hurricanes.

With this simple change in the point structure teams would now have an incentive to push for more regulation wins, rather than sit back and allow tied games to be decided in overtime. This change would help ensure teams can’t coast their way into the playoffs by picking up easy points, but also keep the excitement of the 3-on-3 and shootout for fans.

Winning a game in 3-on-3 or a shootout isn’t as impressive as winning in 5-on-5, so let’s stop treating it that way.

This article is a summary of a full-length independent research project titled “A Playoff Payoff Paradox: Why the NHL’s Point System is Flawed” conducted in congruence with the Indiana University economics department. For a list of sources, or the full-length paper, please feel free to contact me at codyreiff@email.com.