‘The Nuck Stops Here’ is a Vancouver Canucks news, opinion, and analysis column that runs every Sunday throughout the regular season. 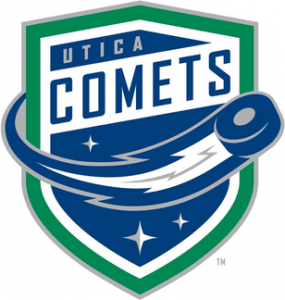 The following player will attend the Utica Comets Training Camp:

Vancouver Canucks General Manager Jim Benning announced today that the Canucks have reduced their pre-season roster by one player. The moves bring the club’s current roster to 41 players.

The Canucks announced today that they have waived forward Alex Grenier. Grenier has played in six NHL games and scored 48 points in 69 games last year with the AHL’s Utica Comets. The 25-year-old was drafted in the third round of the 2011 entry draft.

Alex Grenier May Have Blown His Last Shot with Canucks

Having been seen as a potential option for bottom-six assignment this season, and showing promising flashes for a few years now, Grenier’s shot for a full-time NHL spot may be gone. Throughout the past couple of seasons, Grenier had become a core member of the AHL’s Utica Comets, developing into a well-rounded player at that level. Despite flashes of impact during his six NHL games, Grenier hasn’t separated himself so much as to guarantee himself a spot, and now the opportunity may be gone.

With the likes of Brendan Gaunce, Jake Virtanen, and now maybe even Joe Labate outperforming Grenier and being more worthy of roster consideration, he has been cut from Vancouver’s pre-season roster. Of course, this doesn’t mean Grenier can’t play a role in the organization – he’ll still be a valuable veteran presence in Utica, helping to mentor the next generation of Canucks. In terms of his own aspirations, however? Occasional call-up aside, it doesn’t appear as though Grenier will get any sort of significant NHL momentum.

Defense in Period of Uncertainty

Through a handful of pre-season games, the indisputable biggest story has been defenceman Troy Stecher. The 22-year-old defender has been receiving universal praise from across the hockey world. Through dynamic skating, offensive contributions, and exceptional work ethic, Stecher has set himself apart from just about everyone else.

However, despite being the definite highlight of the Canucks’ pre-season thus far, he’s still far from a guarantee to make the club heading into the regular season. With Nikita Tryamkin, Andrey Pedan, Philip Larsen, Alex Biega, Luca Sbisa, as well as Stecher all battling it out for the last four defensive slots, and Stecher and Tryamkin being the only non-waiver eligible options, he may simply be a numbers causality.

What does work in Stecher’s favor, is the lack of impact felt by Larsen. Expected to be an offensive driver heading into the campaign, Larsen hasn’t done much to stand out, meaning that the organization may be willing to go with the more exciting Stecher. The waivers caveat does still exist, though, which will only increase hesitance among management.

Then there’s still the other four to choose from with their own set of complications: will Tryamkin even accept an AHL demotion? Is there a trade market for Sbisa? Could Biega or Pedan pass without getting claimed? There are a lot of questions, and it leaves the Canucks blue line in a position of significant uncertainty heading into the regular season.

Why Brendan Gaunce needs to be on the Canucks [The Province]

Coming off a disappointing 2015-16, the Canucks have a lot to prove as a team, and as individuals [Times Colonist]

Erik Gudbranson ready to live up to Canucks’ expectations [CBC]